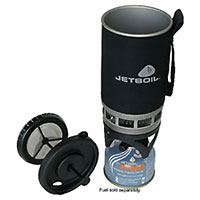 Jetboil is hungry for your tasty recipes. Share your best backcountry culinary creation in any of five categories—Breakfast, Lunch/Snack, Dinner, Dessert, and Beverage—and you could win a Jetboil Backcountry Gourmet Cooking Set.

Need a little gastronomic inspiration? Check out the recipes already featured on Jetboil’s web site. Mmmmm...rice and avocado burritos. The Ramen noodles and Kraft EasyMac shouldn't be too hard to best though. Now fire up your stoves and start cooking.

A winner in each category will receive a Backcountry Gourmet kit, which includes a PCS, a Fluxring Frypan, a Pot Support and Stabilizer kit, and the Jetset Utensil Set. Runners-up will receive the Jetset Utensil Set. The Jetboil Backcountry Gourmet Contest runs now through January 15, 2008. Winners will be announced January 31, 2008. For contest rules and entry info visit www.jetboil.com/Out_There/Recipe-Contest.

My impression of Jetboil is that it's grossly oversold, given its severely limited and highly specialized application. Apparently, the MSR version, recently available, is a somewhat better product, but almost equally limited it its actual application.

No, the Reactor was never recalled. It got delayed during production for quite a bit though. Originally it was scheduled to be out in spring 2007. Then that date got pushed back because "a minority fell short of a particular worst-case combustion condition test, and produced higher than desired levels of Carbon Monoxide (CO)" during MSR's testing.

You can read the MSR release on that here:
https://www.trailspace.com/articles/2007/06/29/msr-delays-reactor-stove-release.html

The Reactor finally shipped to stores at the end of August and is now (after months of hoopla and awards and talk) available.