I was doing some scrambling, felt the hair on my neck raise up, looked up and saw this about a dozen feet away: 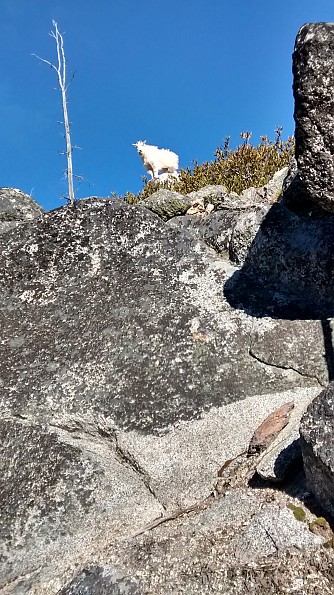 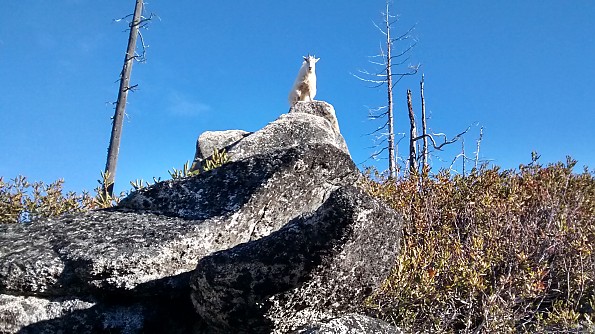 How long she had been there I have no idea.  Mountain goats are well known to seek high ground as defense against predators (and I am definitely one in the Fall) so its no surprise that she was standing right above me.

Is it that we sense noise or smells subconsciously or do we have some sixth sense that makes us "know" when we are being watched?  I've had this happen a couple times in the mountains, just not with goats.  Anyone else have a similar experience?

Have you considered how many times there was something there watching you and you didn't notice it? Our spidey senses may tingle from time to time but compared to most animals we are less than amazing in that ability.

As an example, last year, maybe the year before, I was climbing up the backside of East Baldpate on the Grafton Loop headed up towards the AT at the summit. It was a beautiful morning and I hadn't seen another human being since about 4pm the previous day.

I stopped on an exposed ledge where the trail gave me a nice view of Long Mt to my east and caught my breath. Two or three minutes later filled with the happiness only a great view can bring and refilled with oxygen in my blood I turned to go but before I could take a step I noticed motion out of the corner of my eye.

No more than twenty yards away were two deer still munching on some grass. Being so busy looking at the view I hadn't noticed them there in the trees as I walked up and they seemed inclined to ignore me so long as I ignored them. Once they realized I was looking at them they snorted and moved off into the woods leaving me a bit humbled in terms of my awareness but still pretty happy to have shared the moment with them.

I'm just saying we may have our moments when we sense things before we can see them, but I'm guessing there are a lot more times we have no clue what we've missed.

I am curious how you cook your goat if you don't mind me asking? I have eaten a lot of animals but never a mt goat :)

My "being watched" senses often cry wolf! Last summer, I was enjoying an adult beverage around a campfire in a developed campground when I felt "watched." Just beyond the circle of firelight, a happy black momma bear and two cubs sat watching. Very cool.

Nice photos. I can remember 'being watched' one time in the Adirondacks. I just climbed up the very snowy side of a trailless peak and sat on the cold windy summit eating and taking photos when the old hairs stood up on the back of my neck. I turned and there sat a bobcat not a 100 yards away, just sitting there, watching me, the wind ruffling its fur and then it was gone.

Working in the field can be dangerous because the human mind tends to focus on the task at hand, like measuring water quality or keying out plants which takes concentration.  That lowers the situational awareness. In places like Alaska your life can depend on being aware of your surroundings.  It is best not to work alone under those conditions.

I have looked up to see moose, bears, mountain lions, and lots of other critters.  Predators are the worst.  I took a nap in Colorado in the sun once while hunting and woke up surrounded by a herd of 40 elk.  Some of the close encounters can be charming depending on the critters.

Leading a string of mules gives people lots of eyes and ears.  Prey animals are especially good at detecting visitors.  I like to have a dog or several dogs with me for the same reason.  They are on sentry duty and the first line of defense if I am concentrating on something else. Native people in the bush around the world almost always have dogs with them for the same reason.

Ppine, I usually appreciate having the extra senses that my dog provides in the wild places as well.  My current hound (mastiff) is not as athletic as my former sporting breed dogs so sadly she stayed behind this day.

LoneStranger, the idea of how many times I have been seen but never saw them is a little humbling.

I have yet to eat mountain goat but domestic goat, to me is best grilled after liberal marination in dark beer, chipotle or worcester, my second favorite is braised with bell and jalapeno peppers.  Where I live many quinceañera parties feature goat, and while its not my favorite meat, I have grown to appreciate it.

A friend who guides in Alaska says he tells clients to shoot goats in the rump to avoid eating as much of the meat as possible because he considers it unfit to eat.

Nice, Jeff! I've always wanted to see a mountain goat...hopefully I'll see one this summer - I am going to try to do a Rocky Mountains car camping/backpacking tour for a couple of weeks.

Was that campground the Lafayette Campground?? If so, I would not be surprised.

My ex-mother law was from Jamaica. We used to eat curried goat pretty often. It can take strong flavors really well.  We used to run into goat meat on the Navajo Res although they usually called it beef.

I have never eaten mountain goat, as it is really hard to get a tag to hunt one.  Flying around in helicopters in Alaska on the Coast it was not unusual to see a herd of 10 or 12 animals. They were much harder to see on the ground.  Once I was doing a vegetation survey in the avalanche chutes and rocky country above treeline on the Mainland. Treeline was only about 2,400 feet.  The grizzlies were chasing the goats around and feeding on the kids. We saw bear scat everywhere with white fur in it.  Sometimes we could see shaking alders and hear lots of grunting and growling but could never see the bears. Very spooky.

thanks for sharing the photos - really great! 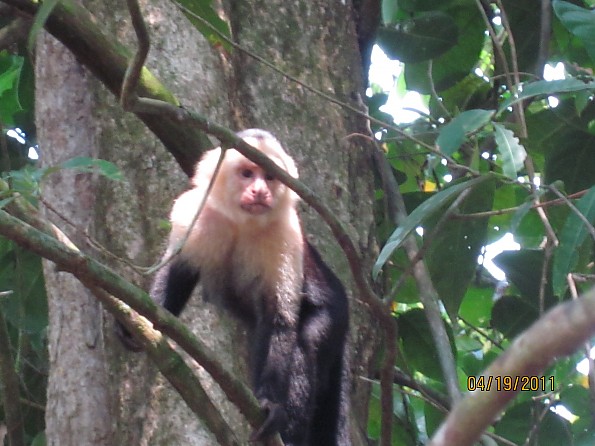 Young fisher cat in the trees (between the birch and the pine) watching us have lunch, below treeline off Mt. Jefferson or Adams in New Hampshire. 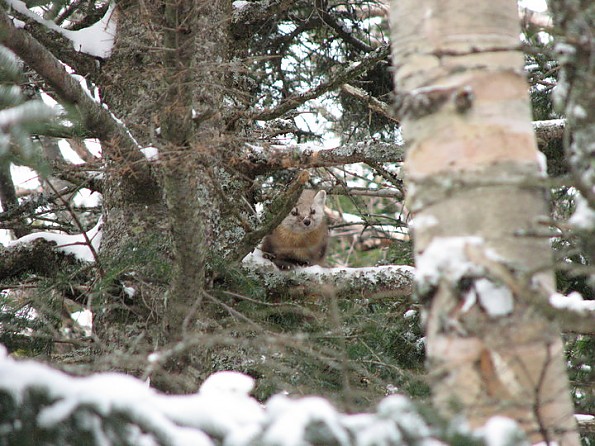 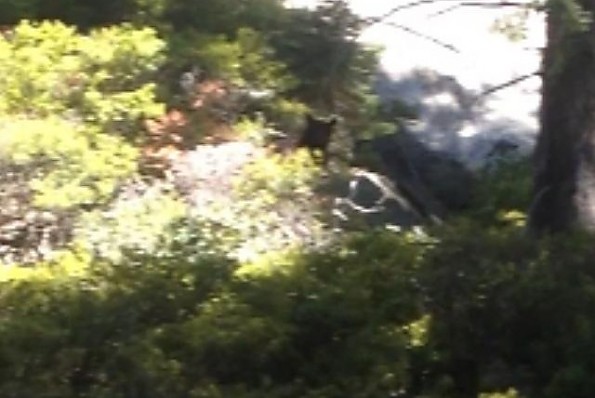 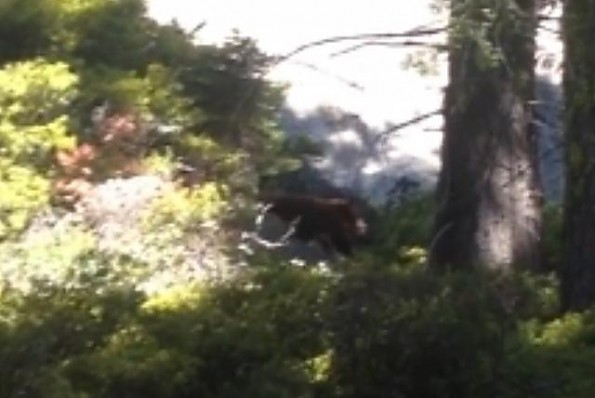 Stalker bear watching us from a perch on El Capitan

Feral goats watching me were all too common of a thing when hiking/hunting in the Southern Alps of New Zealand. Unfortunately, not enough people hunt them there - mostly because 1) they are too easy of a target, 2) the NZ culture doesn't place a high value on goat meat and 3) there are for greater habitat decimaters in the area that get more attention (i.e. feral pigs and brushtail possum). I wouldn't hunt/eat the goats either if I had such easy access to an array of fresh, tasty sea creatures and much more delicious meat from various deer species and feral pigs.

Another creature that I realized was watching me long before I saw it was a 10-15 foot octopus. This was, by far, the most spooked I've ever been in the wilderness.

It happened while spear-fishing and diving for rock lobsters (snorkeling, not scuba) in depths of 20-25 feet. I was gingerly swimming along, in and out of bull kelp forests, checking all the cracks and crevices of large underwater rocks and small cave systems while carrying a catch bag and a rather primitive spear (just a metal barb on the end of a thin aluminum rod with a thick rubber band tied on the handle end). Having a snorkel mask on drastically reduces your peripheral vision. As I swam into a clearing, I gazed down to the sea floor 15-20 feet below me and saw nothing. In a split second, the large octopus appeared (it was there the whole time, but it merely un-camouflaged itself) and it was staring directly into my eyes.

We communicated in that moment. It was exhilarating, but also incredibly foreign and downright scary for a moment. I immediately swam back to shallower water, caught my breath, allowed my heart rate to settle, and had an overwhelming sense that the octopus was the smarter of the two in our little interaction.

And then there is this: http://www.radiolab.org/story/91560-wild-eyes/

If you haven't heard the Radiolab podcast before, I strongly encourage you to start with the link above. This 15-minute segment titled, "Wild Eyes," is a powerful story about how a boy's sad feelings toward zoos leads him to a life of wilderness conservation. It includes an incredible story about being seen by a wild animal long before humans see it.

If you have a spare 15-minutes today to listen to a podcast, this would be a good way to spend it.

Sometimes they just photobomb you...well, this one the goat was just chillin' there, not a worry in the world. 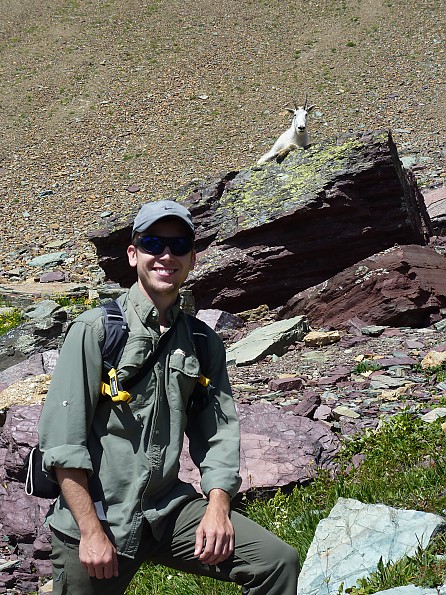 @andrew f., the fisher cat is a great pic!

Thanks for the link Kiwi, I'll definitely be checking that out.

Its not a fishercat-it is a fisher-it is a cool photo though since they don't usually stick around for photos.

My neighbors watch me doing gear trials in the back yard.

They are not sure what to think. I assured them it was part of a complicated process.

Only when I'm online - or on the phone. NSA (No Such Agency) is my constant companion.

(Oh, yeah, when a pretty girl walks by I know my wife is watching me.) hee, hee

A couple of years ago we were followed for 2 days by a Border Patrol drone on loan from an Army base in Texas. We were on the lower Colorado R above Yuma in February.  No one around except Big Brother. It was very discouraging.

Its not a fishercat-it is a fisher-it is a cool photo though since they don't usually stick around for photos.

In some regions of the fishers range, they are referred to as fisher cats, even though the common name is indeed fisher. Friends of mine in NH call them fisher cats, and there is even a professional minor league baseball team named the New Hampshire Fisher Cats.

I suppose it's kinda like crayfish, crawfish, and crawdads. All reference the same freshwater crustacean, but regionally, we call them by a different name.

Great to see a photo of the creature though, as they are not very photogenic.

No Sasquatch stories or photos? Come on guys and gals

KiwiKlimber; You are right of course in the various names of the Fisher. I was just trying to clarify in case someone else might be confused. I said it almost rudely and for that I apologize.

Even in the fur market their is a distinction between the fisher and the fisher cat which I believe has more to do with locale than anything else.

We now have a fisher living locally and though I haven't yet seen it I've tracked it numerous times and seen where it lives. Unfortunately, in a way, we also have had a pair of Great Horned Owls move in and I'll guess the Fisher will one day end up on the menu. The owls though are awesome to see when the crows chase them during the day.

ps-another name for a crawfish is a mudbug and this is the season for big mudbug bakes in the deep south.

My brother will swear on the Bible he saw a young Sasquatch in Oregon at night in his headlights. It was a smaller one with red fur.  Bigfoot stories run in my family for several generations, but this is the first sighting.