I recently had the good fortune to acquire a TNF Ring, Oval Intention. It may be the first year of production as it has the higher blue fabric side walls: http://www.oregonphotos.com/Geodesic-tent1.html

I would like to restore this tent to some degree or another. First inspection before setting it up does not reveal any damage other than a couple of tiny holes in the floor and the poor condition of the coatings described hereafter. Even the netting is in good shape.

The polyurethane coating on the floor and sidewalls has intermittently cracked and peeled throughout but what remains seems stable and can't be scraped off with a fingernail. The coating on the fly has withstood time and use much better and is largely intact and unpeeled but is definitely weakened and will need a recoat. I washed the tent yesterday in Woolite and dried it in a cool dryer as it is about 20 degree's here in Estes Park. I did not notice any further delamination or coating residue. 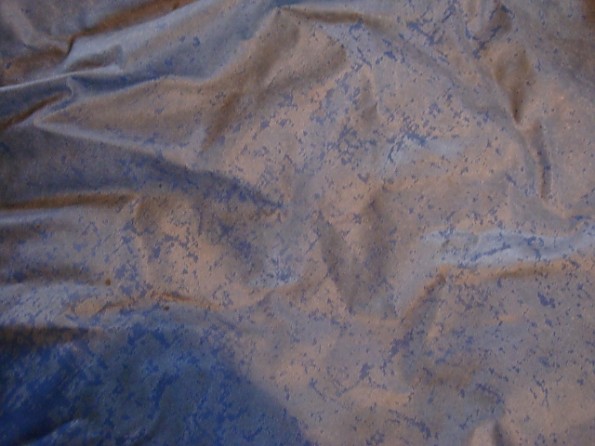 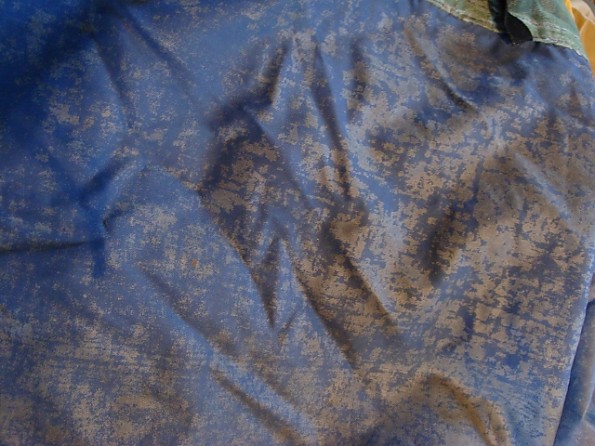 Last night I reviewed the posts concerning delamination and recoating. The common thought is that all the old coating must be removed. Yet I'm wondering if this is necessary when what remains has good adhesion and is staying put? Anyone have experience with recoating over intermittently flaked coating and sealing it all in. Would the new coating act to reinforce the old as it adds a new layer to all? Or, perhaps change it up and coat the outside previously uncoated surfaces on the floor, sidewalls and rain fly?

Another thought is to add an entire new floor over the old, either on the inside or out with a light weight waterproof fabric. I don't know the tents' future but I personally would use it for car camping and not be concerned about the added weight. But I'm wondering whether a vintage tent that is TNF first geodesic dome and perhaps the first year of production would be devalued if modified in this way?

Thanks for your consideration and advice on this! Norm-

I bought a TNF Oval Intention I think from someone at Trailspace about ten years ago when I was living in Flagstaff AZ. It was the newer version pole sleeve one, and was brand new yet 25-30 years old, the owner had bought it new and then packed it instorage and never used it. When he shipped it to me it was still in the box the place he bought it from, (believe it was REI) had shipped it to him.

I sat it up andthen sold it to a friend who was going to Everest.

Being brand new it had never been seam sealed which is what I did after buying it.

I had a TNF VE24 and VE23 tents back in the early 80s. I used the VE24 for 27 years till a grizzly in the Gros Ventre Wilderness tore it aprat while I was away on a dayhike.

No advice sorry on resealing the coatings, but I did replace the floor of my VE24 in todemite in the spring of 1980 when I was winter camping there. I had accidently burned a huge hole in the floor after leaving a candle burning in the tent. I had gone to use the restroom in Camp 4 and met some friends as I was coming back and totally forgot about the candle burning. Four hours later when Ireturned the tents floor had a huge 3 foot diameter hole and I replaced it with water resistant nylon material I found at Yosemite Valleys Mountaineering store. I hand stitched it all in the hole and continued using the tent till 1996 when the bear destroyed the tent.

I know nothing sticks to silicone except more silicone. I'm cheap so silicone and mineral spirits work great for cheap. Re coating poly coated tent sounds pricey. I think I would try some small test spots with a diy silicone solution. It may stick to the old poly coating. I've tried it on some poly coated fabric and it seemed to dry ok. On the floor you can use drops of it for a little grip. Have fun with your new vintage restoration project.

Boy, this is a tough one. The issue with re-coating a partially-delaminated fabric is that the mildew that ate the coating is still there, and will just colonize the new coating.

Mirazyme kills mildew, and aids in removing the remaining coating. So, if you goal is to maintain resale value, I'd soak the entire tent body in a bathtub with warm water and a couple ounces of Mirazyme for about ten minutes. While it's still soaking wet, take a soft-bristle nylon brush and gently coax the remainder of the coating off.

Then, there are a few PU products out there you can use to re-coat the fabric: McNett Tent Sure, Aquaseal Polycoat, and Kenyon Recoat.

I think this is the best way to go, and as a bonus the Mirazyme will also take care of any associated smells, while extending the remaining life of the rest of the tent. If this method fails (if the floor is so weak that you brush right through it...) you can still ship it off to Rainy Pass to have them put a new floor in, or do it yourself.

I wouldn't bother restoring the WP floor coating.  I would use a ground cloth.  Problem solved.

Thank you all for your replies -

Gary, have any idea what became of your Oval following the expedition?

Pack Fan - I've read quite a bit here on the silicon and mineral spirits concoction but never tried it. May give it a shot perhaps on the fly though I'll need to wait awhile until things warm up. No room to spread anything out in my cabin.

Ed - I may at least begin with a separate ground sheet inside the tent so that I can begin using it. I'll cut it a little large to wrap up the sides a bit to keep any moisture under there. As for the fly, we need to get some precipitation around here so that I may check how effective the coating is still working on the rain fly. No well here for using a hose on a warmer day - cistern. Maybe I'll just recoat the seams and then give a thorough spraying on the outside with silicon or the like.

Dave - Thanks for the advice and procedure. Its interesting though, the tent has no old tent odor or musty/mildew smell. Perhaps it just peeled from use and aging?

I'm still considering adding the coating to the out side of the tent floor. I had a VE25 that had the coating side of the side walls facing out. If it begins to wear I can recoat where needed.

For your information, I would like to share this e-mail from Rainy Pass Repairs in Seattle - I’m sorry but we no longer replace tent floors and we cannot replicate a rain fly. You can try TentSure to re-coat the polyurethane coating on the floor.

No I never heard from him again about it.

Hmmm, ok....at OutInUnder dot com, I've got a lot of material from the TNF folks on the Oval Intention and Bruce (the TNF Bucky Fuller geek) is adding more about TNF and Bucky's relationship in the last decade of Bucky's life.

Pasting this in to the main site URL gets you to a cooks tour of the tent: content/oval-intention-walkthrough-lp-version

Thank you Alan for introducing me to Out In Under. I love reading about the history of gear and the era when it all began! With the weather finally warming up here in Estes Park CO I finally was able to set up the Ring Oval Intention the other day with the aid of 3 pole splints. I found that all the poles except one need to have sections replaced. I have learned there were issues with the early Easton poles but don't know whether they were resolved before or after the manufacture of my tent. I found full length splits, broken section connector inserts and broken section ends where the pole slips over the connectors. Amazingly, the shockcord within each has nor broken and still has elasticity. I'm going to contact TNF and see if the warranty will cover the damage. I hope they don't give me what seems to be their standard response these days ie 'We will give you 1/2 off on a new tent' as that is not what I am after. I would like to rehabilitate the tent and have the experience of camping in a Ring Oval Intention. Cheers, Norm

PS: Do you know of a source for the pitching instructions? Anyone? Thanks-

Let me know what they say at TNF. I still know a few folks there.

re: pitching instructions - I don't think printed instructions still exist. It sound like you got it pitched, right?  If you search OutInUnder for the Oval Intention Walkthrough you can see one pitched in some detail. That might help with pole position and relative length.

Yes, got it pitched through trial and error but I wondered if TNF had advised a procedure.....say a certain 2 poles first to get it standing and then add others..... that worked best especially with one person doing the set up. No worries though , once I get some decent poles and begin using it I'm sure the best method will reveal itself. Thanks!

Alan and others following this topic:

Glory be! The North Face has been extremely supportive to my efforts of rehabilitating the Ring Oval Intention. I have just received an entire replacement pole set. Each of the original poles had at least one damaged section. I sent the poles in with a note and without any discussion the new poles came in the mail. Now that's customer support at its finest.

Here are photographs of the Oval ring Intention set up with the new poles in RMNP. 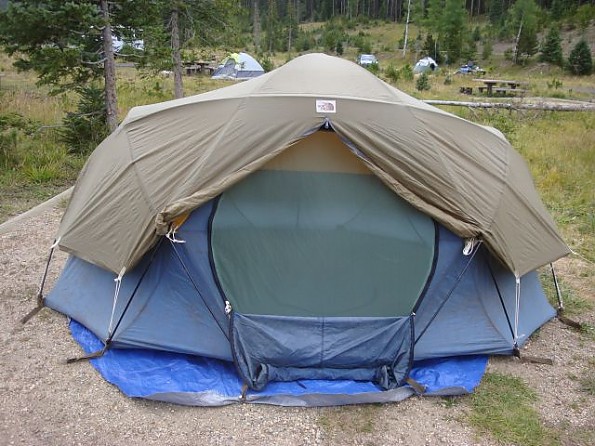 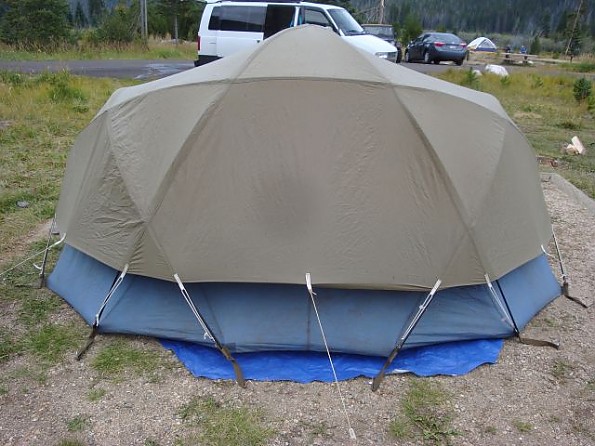 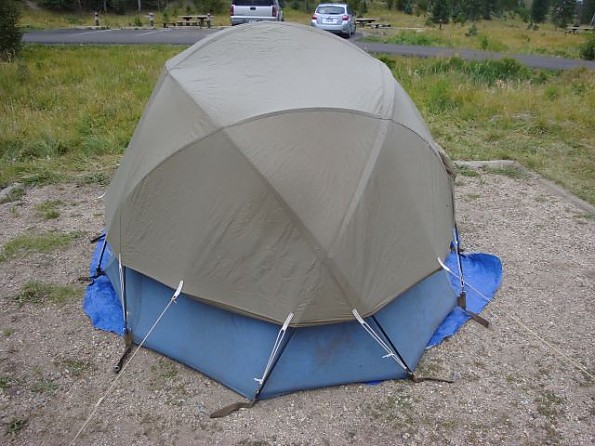 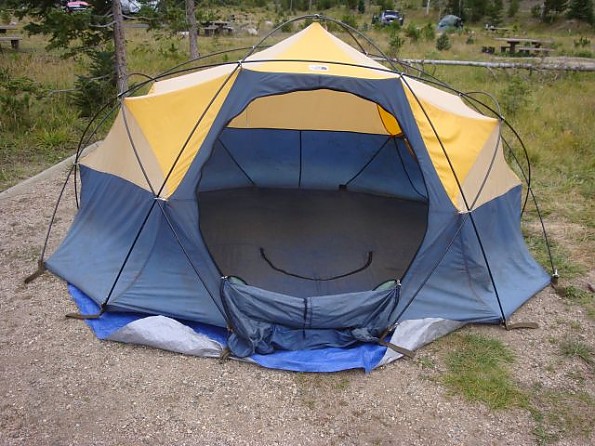 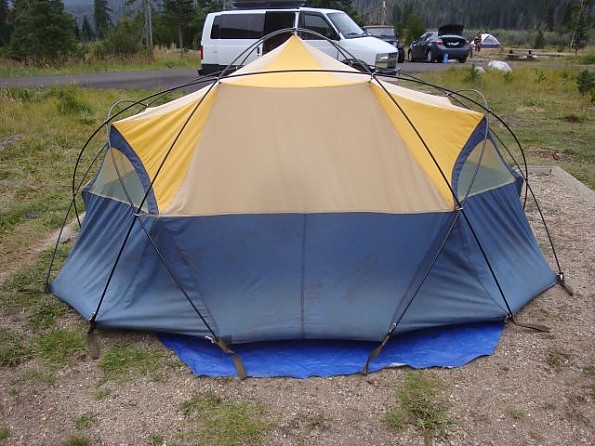 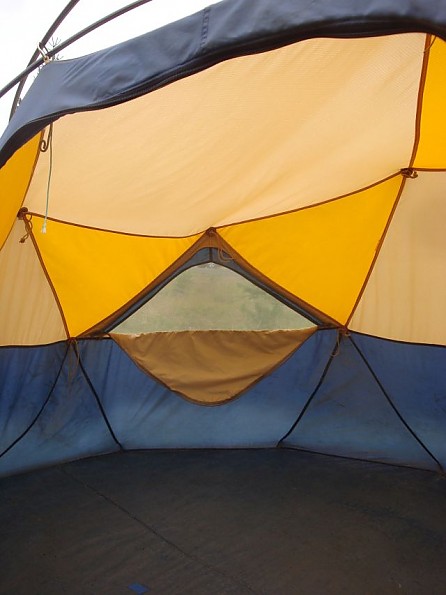 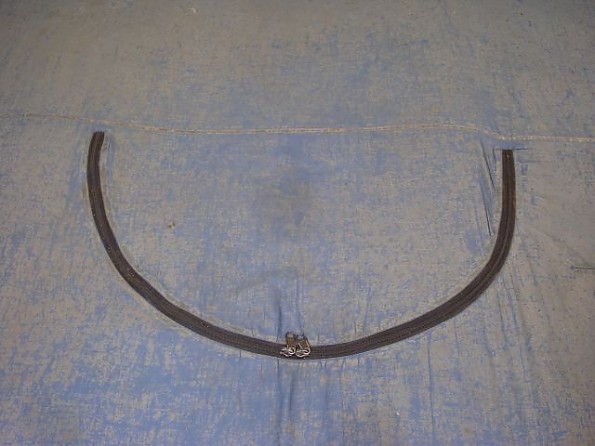 Now on to the recoat  of the floor and fly! About time eh?

More Topics
This forum: Older: Tent repair while in the wild... Newer: Moss Tent with no buckles for rainfly
All forums: Older: Wind Rivers (fun in the face of adversity) Newer: Roxanne Qumiby's family donate's 87,000 acres to Feds In maine..