Does anyone else use down comforters?

I've been backpacking for a few years now and on of my first gear purchases was thermarest down comforters. Being from Texas, I have yet to regret this decision and am just wondering who else uses them and in what conditions. Most of my trips have been in BiBe and into the White Mountain wilderness of NM. My wife and I went out to BiBe in January and saw temps in the high 30's to low 40"s. I sleep hot and of course my wife sleeps cold so we have supplemented with a small fleece blanket for her. I guess I am also looking for some advice also because we have plans to hike part of the JMT next summer when I finish school. I am curious on others thoughts on my sleep system and the JMT. If I will need to get bags for this trip, I would rather start putting away for them now.

I climb a lot with another guy so....

Joking aside, I hear these are really popular with minimalist mountaineers, as long as you are comfy spooning with your tent mate.  I sleep with a down comforter at home, not one made for the outdoors, but it is very warm.

As long as you have a good pad under you and a good roof over you it sounds like a good system.

My best advice is to try it out in conditions which best reflect the worst you expect to see on the trip. That might mean doing a little '"yard camping" if you are up to it.  It sounds kinda corny but it is a good way to find out what might work without risking an epic.

+1 to what Jeff said about the backyard testing.

I'd think with the variable conditions found along the JMT at different elevations/aspects, I'd think the versatility of a quilt a benefit.

I had a JRB/TiGoat UL Sierra Sniveller that was wonderfully versatile, working from 20 degrees Fahrenheit all way up.

Warm sleeping pads can, in theory, "make up" for a temporarily-inadequate quilt, too. If your wife uses a pad with an R-value above 5--i.e. a "winter" pad--and you use one around 3--a "three-season" pad--that might work well.

I use down quilts year round now. I like them better than the traditional sleeping bag.

You will be fine in your quilt, if its in the quilts comfort zone, same with a sleeping bag. Its more important that your gear is good for the temps, rather than changing your sleep system. Maybe add to what you have, the adventure medical brand has a very durable space blanket blanket/ground cloth. Something like that could extend your comfort range several degrees, and still be really light. I wouldnt get bags, my wife is the same way, she would freeze without my heat. I agree with Vince, whats under you makes a huge diff, an extra layer for top and bottom should extend your range quite a few degrees.

Thanks for the replies, everybody. This just reinforced what I was thinking about my system. The versatility of the comforters was the selling point for me and like I said before, I have been happy with it thus far. Keep rocking this site, you guys!

Cosmo, did you ever post pics of your two day trip to the WMW the last time you went? You know the area you back packed burned during the Little Bear fire and the wilderness was closed for months.

FYI I did score a 900fp JRB/Titanium goat quilt from pillowthread that I used when I went to the Pecos wilderness and a the White Mountain Wilderness last October.  The quilt saw the temps dip into the low 30's.  There are parts of the WMW that were untouched by the fire.  I'm in one of those areas in my avatar pic.

I have a synthetic quilt I use in the summer (Enlightened Equipment Prodigy) ... the insulation is Climashield Apex.  I like synthetic in the summer because if I get it sweaty and dirty I can just throw it in the washing machine when I get home.

In the fall and spring, I use a down Katabatic Alsek.

I am all ears , well eyes really on this topic. As close as i can come is a old down army bag and it's outter cotton liner, where the zipper went up the center as you lay flat on your back.

That was comfortable but some wicked musty, and now is long gone. I did use it hammock camping where it was great, but heavy. It also saw grave site camping on Mt Adams NH.

The right one of these quilts might be interesting to me, but I don't know where to start reading and searching around it seems they assume you know enough you can work it out.....

I don't..... Looks like a center zipper bag with no zipper to me.

The hammock forums have lots of info about quilts. Plenty of diy projects for a man with your skills.

Ok I will start that search. My question was more like Whv would i want one?

Most people dig 'em for above-freezing temps because they weigh less and are more versatile than a sleeping bag...If you're bringing a sweater and hat with you anyways, you don't really need a hooded bag in milder temps.

For instance, I have one of Joe's hybrid sleeping bag/quilt things that I got over at Zpacks.com. No hood, with a single center zip on which you sleep, and a formed footbox. I have the 40 degree model, in the long, wide size, and it weighs in under 14 ounces. I can drape it over me during warmer weather, and take it down to freezing, comfortably, with a hooded down sweater and beanie.

Zpacks.com is where I'd start. There's a few dozen quality cottage manufacturers out there making really nice stuff...it's just that I've bought many things from Joe and can personally vouch for the quality and ingenuity of his work. Some manufacturers use drawstring footboxes and can be laid completely flat (Jacks-R-Better, Enlightened Equipment), while others are more aligned with traditional sleeping bag designs (Nunatak), and still others double as hammock quilts (te-wa, Stormcrow).

I feel bad now for listing some makers and not others...there are literally dozens...

Well tell me who Joe is? Don't feel bad last night here was 24 degrees F a tad chilly for these. I am curious only so far.

I searched too and still don't think I have it right in my head.

Then there is a under quilt which is scary if yer' Yankee, as we tend to be leery of anything that starts with 'under'

So while I don't know it yet there must be a over quilt... To my ignorant mind that means there is 2 sleeping bags and a hammock.

Looking at one gob rat nest of a tangle where 'Jack' was tying cute bows in a foot box, which i can't say I understood, but think he was tying a quilt under the hammock???? totally confused me.

So did that gal solo, which i tripped over, but i think she is selling something else altogether anyway ;-)

You young people are so different these days. LOL

The killer was, why I even got a idea if anything above I said happens to be true.... A lot of that fuss and muss could be removed from what seems to me is a overly complicated sleep system if you just built a hammock into a sleeping bag, so the human body is supported on the stronger inside nylon sheet that carries the lines and assorted hard ware, which should ALL be made removable, so the under quilt and over quilt if there is on is all one item, but the strongest part is the inner sheet.

Haha! Rob, no I never did post any pics from that trip. Actually, hte computer that had those pics is now gone. All I have is a few from the memory card. 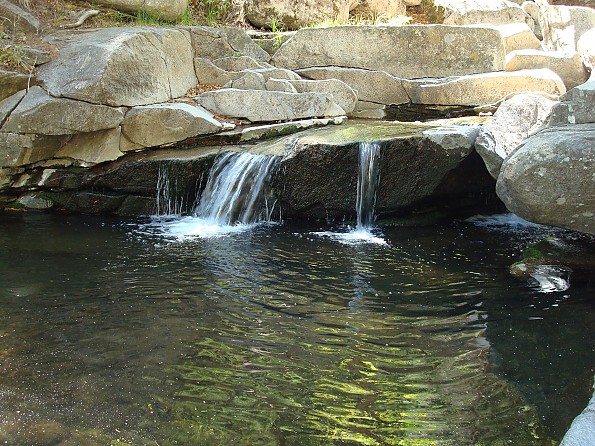 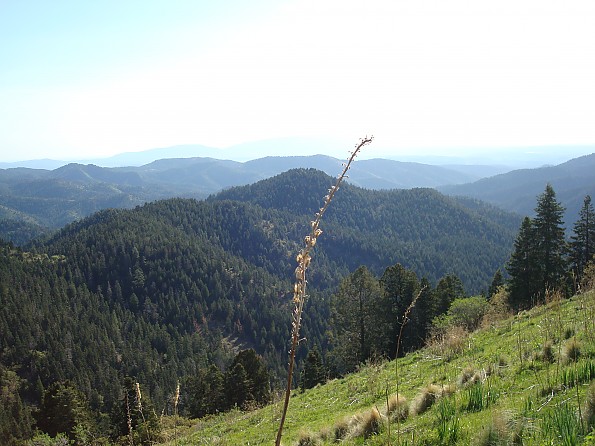 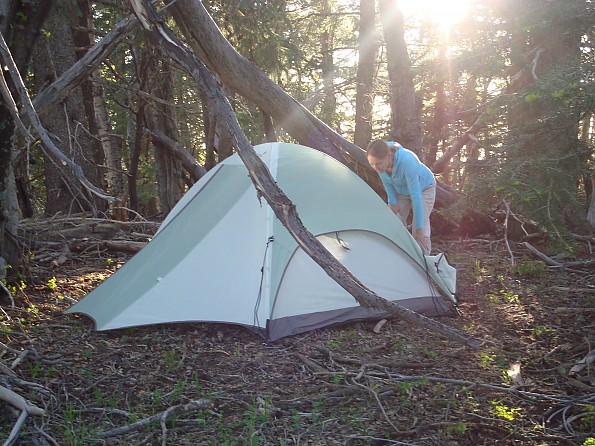 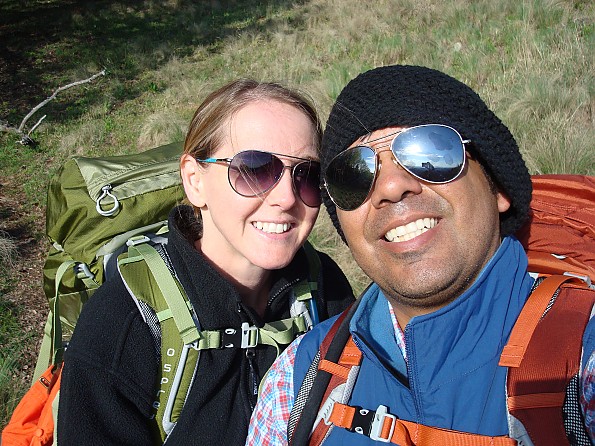 The Sierra summer hiking system usually includes a 20F bag.  Most nights are not that cold.  Many nights you may spend much of it on the top of the bag.  At 10,000'+ it has been 20F or less some night every month of the year.   For a couple of days in August the temperature didn't get above 35F near Tyndall Creek - a few days from the end of the southern end of the trail.

One concern is the loft. There are charts on how cold you can consider using a quilt based on the loft.  1100 goose down gives the same protection as a 600 but weighs less per inch of loft. How you keep drafts from sneaking in or movement of the top are important.  So is a foot box if you need it to help stabilize the quilt.

Don't forget  the ground pad.  It must give you 'loft' (when compressed with your body) and insulation as much as the quilt does above you.  Compressed to 1/2 inch is almost no protection.  The pad is part of the 'system' to keep you warm. I have a pad wrapping of 'fuzzy stuff' to give me a better feel to my skin.  On the JMT, if it gets too cold for you, you can always put on your warmest clothes and stomp around camp or break camp and move on with a plan to sleep in the sun later on.

I have not heard of a good,  quality made back packing/hammock quilt failure -- either physical or temperature control.  Most who use them seem to like them very much.

Probably best to have a quilt for each of you.  You can make an adequate quilt using plans from several places on the net.  For example