In April after taking a rideshare off Craigslist to Flagstaff from Tucson, I am planning a 400-mile ride throughout northern Arizona.

Plan to take a month to pedal from Flagstaff to Sunset Crater, Wupatki Nat Mon, SP Crater, across the San Francisco Peaks Volcanic Field to 180 then to Red Butte, Valle, Red Tank, the south rim of the Grand Canyon, Cameron, the Dinosaur tracks near Tuba City, Navajo Bridge, Lees Ferry, Jacob Lake and finally the north rim of the Grand Canyon where I start working this May-Oct.

I also just applied for and am starting to get social security later this month. After the Grand Canyon job, I plan to retire wholly and start living on my bike year round, traveling the USA. 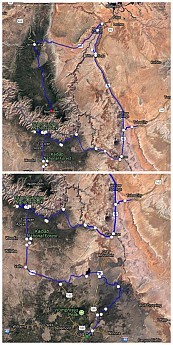 Above is my route in two aerial images.

A good place to ride.  I have a special affection for No AZ.  April is a great month to be there.  A little cool some of the time but great for riding.

After the heat of late March here in Tucson, I will be ready for it to be cooler again on the Colorado Plateau, I have a 40 degree and a 20 degree sleeping bag, and plenty warm clothes.

That's a lot of pedaling, Gary. Good luck with the planning.

Have you ever tried to figure out how many miles you've covered by bike?

You are the right guy to ask the question.

It's very popular, there are many bikepacking and bike touring groups on Facebook. Bikepacking is just a new name for bike touring, though many bikepackers take the trails more than the roads. Since the invention of 29 inch wheels and the Fat tire bikes, it has become more popular.

And one can stay with hosts through www.warmshowers.com and www.couchsurfing. com to get places in peoples yards to camp, take a shower, wash clothes, use their kitchens and make new friends around the world.

Tomorrow I am catching a ride to Flagstaff, then staying there  maybe till next week then starting on my 400 mile ride around northern Arizona to get to the north rim of the Grand Canyon on May 7th, the earliest I can arrive.

I will be out of touch most of the way, after Flagstaff I won't get to the south rim till late March, plan to spend a week there, then head down to Cameron, some dinosaur tracks near Tuba City, then Navajo Bridge, Lees Ferry, Jacob Lake and finally the north rim.

Immediately after Flagstaff I am going to Sunset Crater and Wupatki Nat Monument, then heading west to SP Crater and then on my way to the south rim.

I hope you have a good trip and safe travels, Gary!

You are the right guy to ask the question.

I think Gary is an exception to the rule, most cyclists do not rely on their steed for long distance transportation.

I am a avid cyclist, and avid backpacker.  I find weighing my bike down with camping gear takes all the joy out of riding, reducing it to a form of transportation, versus a pastime.  When I do bike trips, I do so with others, accompanied by a support vehicle that hauls our stuff from place to place.

I have only run into one bikepacker here in Nevada.  He had a fat tire bike and was headed from near Carson City to Bodie, CA a distance of maybe 90 miles.  His route was all on dirt.  I asked him how much water he had on board and he said 9 liters. It looked like an interesting way to travel.

I am currently in Flagstaff after catching a ride up from Tucson yesterday. Plan to acclimate for a week or so then head out on my tour to the north rim job. 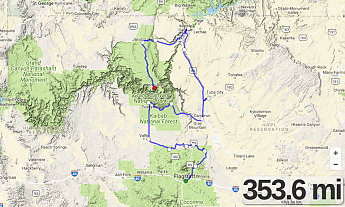