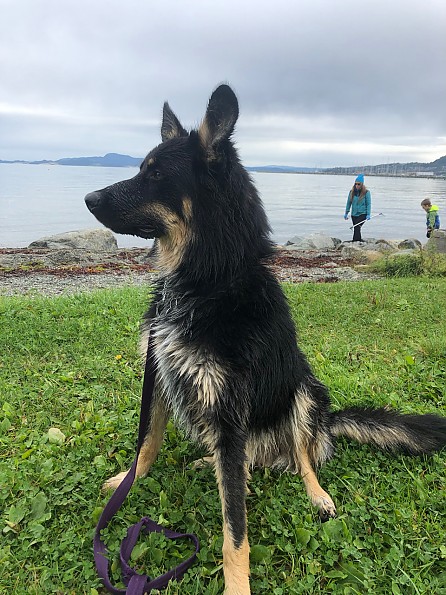 Harley is a 9-month-old German Shepherd-border collie mix, the same blend as our dear departed Ralph, who trotted off this mortal coil over 3 years ago. We adopted Harley three weeks ago today -- had to fly to Bergen and back to pick him up. His previous owner was a single mom who didn't have much time for him, which is why she decided to give him up, so he comes with issues with cars and other dogs. In the latter case, he gets frustrated that he can't approach and greet and ends up putting on a show of aggression. But yesterday a dog and owner came out of the woods as I was playing stick with him off leash. While I panicked, he ran over to the other dog, they gave each other a quick sniff and started playing. No big deal. So we're working on it. 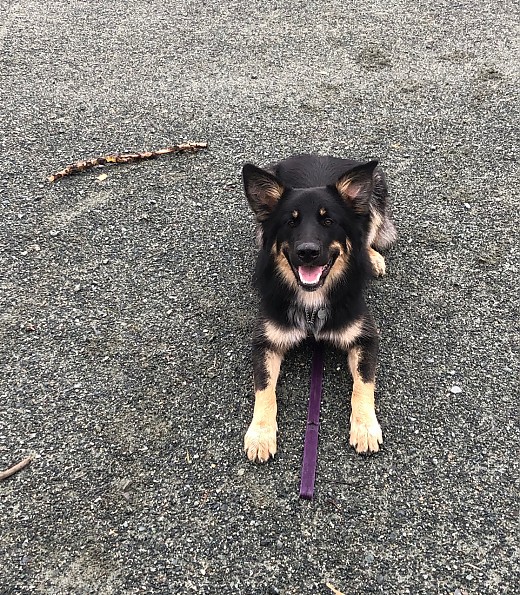 Last weekend we took him on his (probably) first real mountain tours, Inderbergsalen and Jørenvågsalen, a pair of day hikes on  the mountain-islands north of Kristiansund, with an overnight in a self service-hut a few km in on the second hike. I first did the latter peak a few years ago (last part of a mixed trip report), took a rare opportunity to ski neighboring Skarven last winter, and did the whole 20 km / 1500 m Tustna horseshoe travers in 4:40 last June with my daughter, but my wife hasn't spent as much time there and it is both gorgeous and uncrowded, and I hadn't done Inderbergsalen, so it was a good choice. 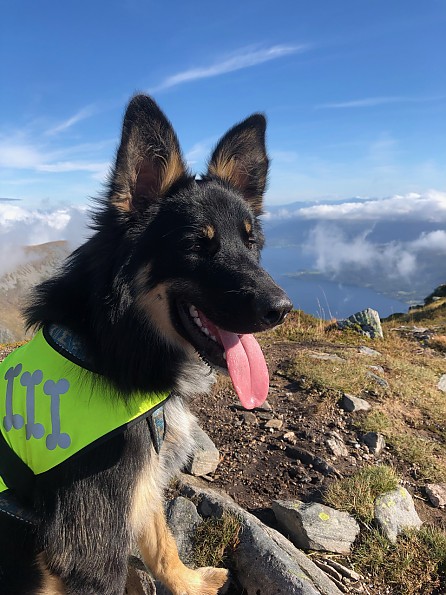 He can pull mightily on the leash when he's excited, which means that I get the priveleg of holding the other end of the leash. he was pretty mellow going up, but pulled like crazy going down, an the trail was mostly steep, rocky, and/or muddy so I was pretty grumpy by the time we got back down on the second hike. I also realized his pulling makes me consume a lot more calories on runs -- I'm down about a kilo, and I don't have much to lose. We're working on it.

Anyway, here are some more photos of dog, wife, and scenery from the hikes. 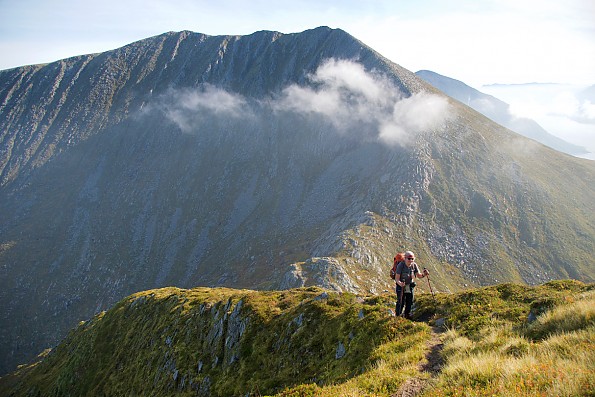 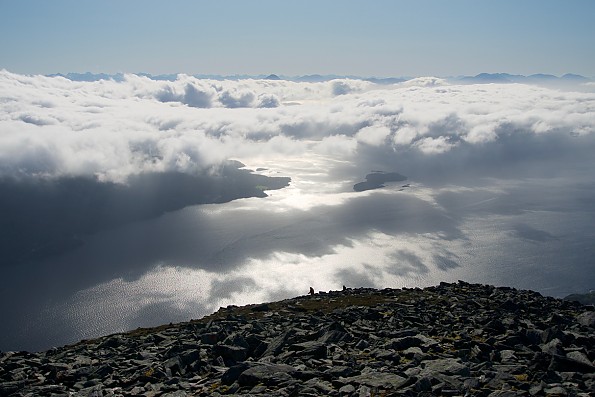 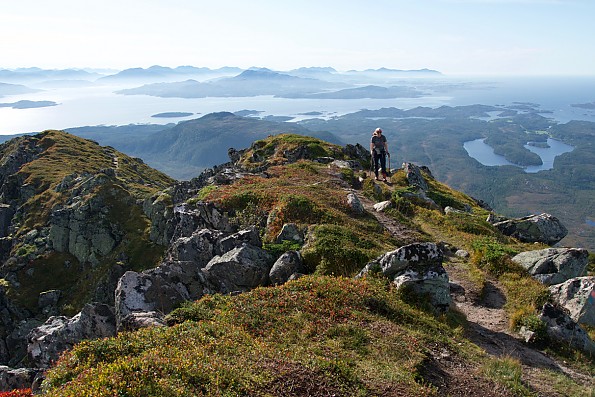 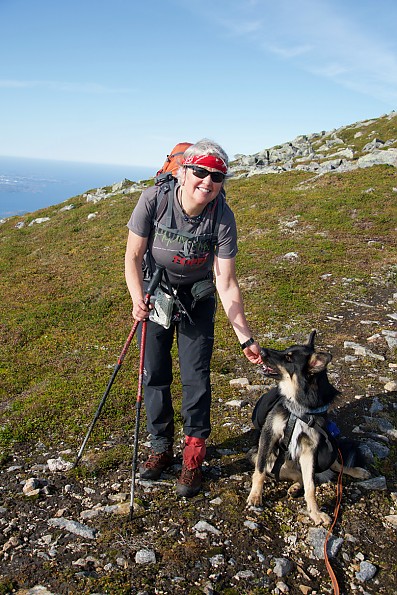 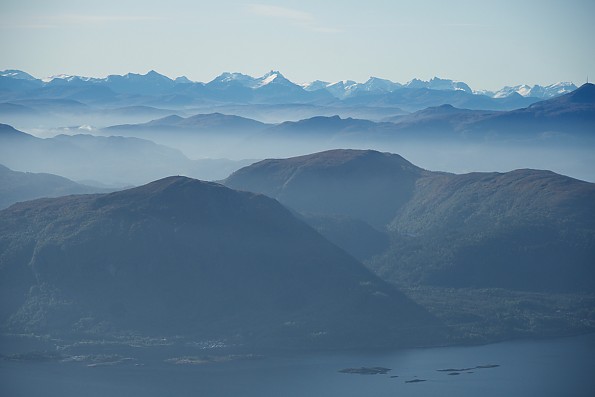 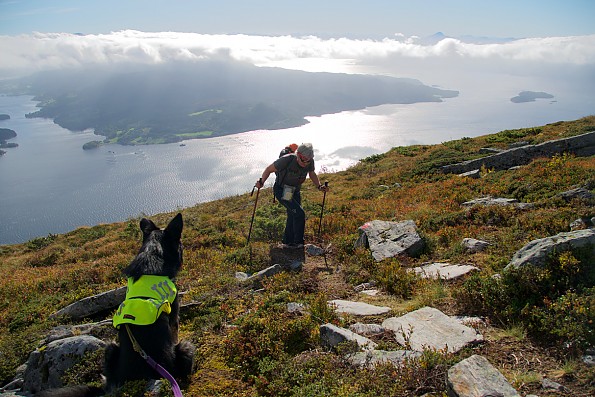 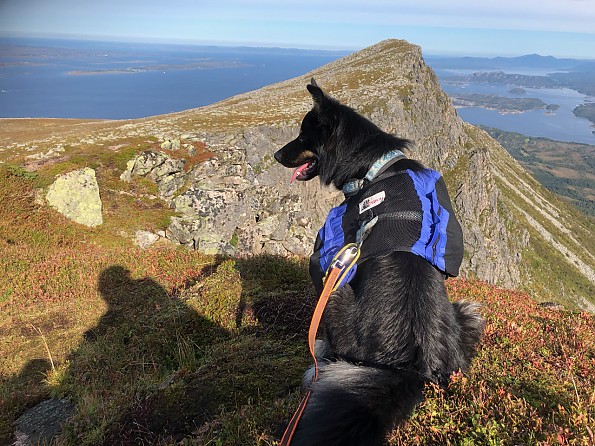 I love dogs, especially in the field.  I have had multiple herding dogs for 50 years.  I have had one collie/g shep.  The more exercise he gets, the easier he will be to handle.  Get him tired and he will start to pay attention.  Teach him the commands and get him to behave on a leash after getting tired. Use a slip chain.  Pulling on a regular collar can damage his larynx.

A dog that big can do damage to wildlife, other dogs and people.  You have a responsibility to get him trained so he can be off lead.  I really the look of Harley.  He looks plenty smart and athletic.  Let him carry a pack even on day hikes.  That is a lot of dog.

There is nothing else like dog/human companionship. Looks like you found a good one with an excellent personality.

I had a Cairn Terrier for 17 years and he loved to hike and camp. At less than 20 lbs he could pull amazingly hard but he was super smart and would only pull on the uphills with his harness but not downhill. We became so close that communication was effortless and most times with a simple look or slight gesture. We had a system known only to ourselves.

Enjoy working with, playing with and living with your new companion.

What a beautiful dog (and hike), BigRed!

Harley is super lucky to have been adopted by your family. He will have wonderful adventures and lots of love. Have a fantastic time with your new furry family member.

I had a Chow mix as a backpacking dog for 15 years and he could really carry some weight.  It was common for him to hump 17 days of his own food in his Adventure 16 dog pack.  Everybody tells me to get another backpacking dog but I don't know where to start, really.

Plus, a dog despite being a dear companion is a big hassle on the trails and in the woods.

Big hassle is a relative term.  I run into few people and never have problems with my dog.  She carriers her stuff and some of mine.  She is in charge of security especially when I am asleep.  I have been packing with dogs for 50 years.

8 to 12 km of running over hill and dale at my old man speed doesn't do much to tire him out, but 40-50 frisbee throws get him pretty lathered up.

He carried Ralph's old pack with his own food and dish last weekend. I'm thinking we should put 3 liter water bladders on both sides just to see if it slows him down.

He wants to please but still has a wild side. He like to steal things around the house and then play keep away -- socks and handkerchiefs especially, but he has also picked up a pen, an Ikea hex key, a paring knife off the kitchen counter. Amusing but not a good habit. We're workin' on it.

Here he is at rest: 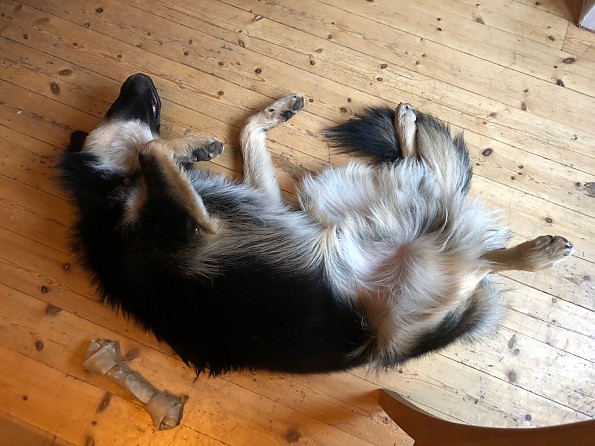 Carrying water is a good idea.  It is handy when you are on the trail.  He needs to use up his abundant energy.  Just keep the load balanced.

I used to let my cowdogs trot behind my truck.  They would go 4-5 miles at a time.  We did some 25 mile days with a pack string.  My dog Snuffy would travel further than that keeping track of everyone.  She would eat lying down.  She lived to be 15 and could run on the last day of her life.

Good on ya! He'll be a great dog before you know it. And I don't think you have to do anything special. Just be you and do what you do and he will figure it out. That's what dogs do. Sounds like he'll be a smart one too! Border Collie and Shepard...I like it! Our collie came with some baggage but we just treated him like our dog and he's doing great now after a couple of years and growing out of puppyness. And Max was the same way around other dogs too...at first. Now, he's the life of the party! Yours will be too, before you know it. Hope you have many many fun and happy years and lots of mile together! Cheers, Bob

What a great pooch!

Maybe he can pull sleds for you with all that energy.

Mine loved pulling kick-sleds and even me on a mountain bike.  Pulling instincts are a gift to be managed.  He's lucky yo have you as a pet ;)

Took him for a hike up nearby Jervfjellet ("wolverine mountain") on Sunday, above the big Jonsvatnet reservoir. He still pulls like a freight train sometimes, but if I drop the leash and let him go he will stay close (with a little reminding). Wouldn't put it past him to take off after a deer or moose, though. Even faithful old Ralph would do that. 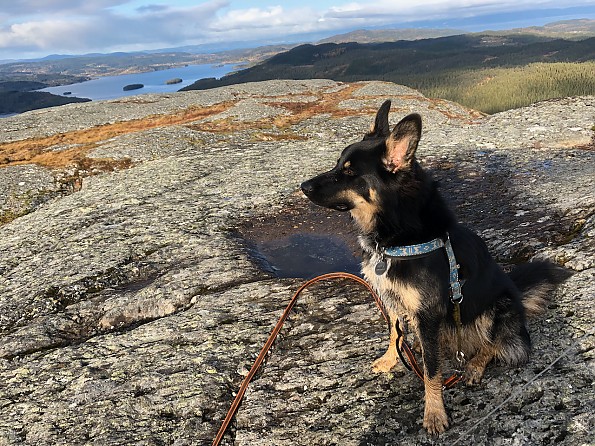 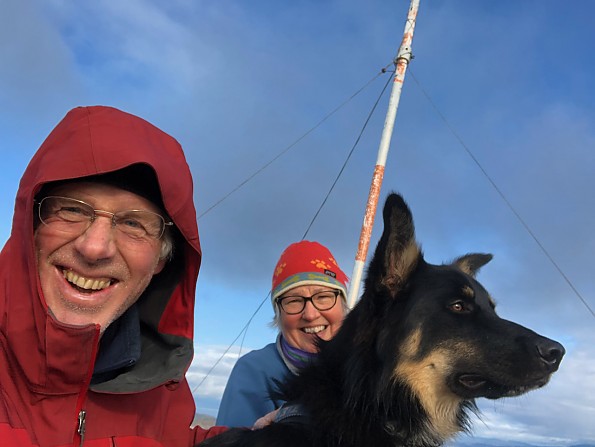 He looks very regal on that mountain!

Beautiful hiking partner...I was hoping more people can learn tricks and get good advise from you if they want to do the same thing...He make a great hiking partner

I took a break from this site for a few years and was sad to read that Ralph passed away.  I always enjoyed reading about him in your trip reports.  Looks like you got a good new trail buddy.

Thanks PNW. Harley has turned out to be quite a handful. He goes bats**t crazy when he sees other dogs, out of some combination of frustration and fear, and he still pulls like a tractor, both of which make it pretty hard to take him on hikes. But we're working with him and hope that as he gets over his teen years he'll calm down. He's "aggressively affectionate" indoors.

You want to break him from chasing wildlife Red.  That is not acceptable especially large mammals.

Some dogs are born pullers.  You can put them in a harness with a lead some of the time.  They need to have really good oral commands so they can be off lead most of the time.

I had a big dog that was collie, and Australian shepherd.  She loved to pull so I bought her a sled dog pulling harness.  On winter trips she pulled a small plastic sled with at least half of my gear in it.  She pulled me up hills on a mountain bike.   You can try ski jouring.  Harness all of that energy.