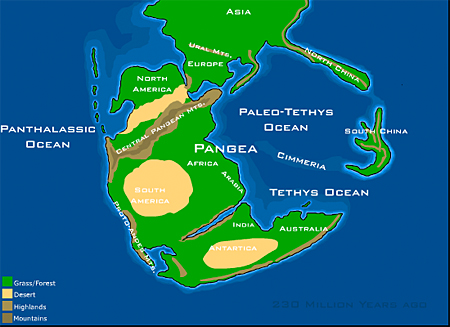 For more than a decade thru-hikers have been able to hike an additional 1,800-mile stretch of the International Appalachian Trail (IAT) from where the original AT ends atop Katahdin all the way to where the Appalachian Mountains reach the sea at Crow Head in Newfoundland.

If that's not far enough for you though, Dick Anderson, president of the IAT, has an even bigger idea: an intercontinental, international Appalachian Trail, one that reaches all the way to...Morocco?

Go back to Pangaea days and the birth of the Appalachians (some 480 million years ago) and the range was part of the Central Pangean Mountains, the same mountain chain on the supercontinent as the Caledonides of Ireland, Britain, Greenland, and Scandinavia, and the Anti-Atlas in Morocco.

According to an NPR story, Anderson is trying to get all the countries once connected by that massive mountain range to designate certain paths as part of the IAT, extending the international trail all the way to Morocco, hitting Greenland, Norway, Britain, France, Spain, and Portugal on the way.

The idea is catching on. In April, Greenland joined the IAT as its seventh chapter. And this June, the British Geological Survey designated Scotland's 96-mile West Highland Way as part of the IAT, Europe edition.

If it all comes together required gear for your next AT thru-hike could include either a sea kayak or a plane ticket to Europe.

Read or listen to the NPR story "Hiking The Appalachian Trail — To Morocco".

Info on the IAT: www.internationalat.org

Well...thank God for pack rafts, can you put a sail on pack rafts?

What will they think of next, an Equator trail?

The Appalachian mountains are actually quite worn down from the days when the super-continent Pangaea was here are'nt they. I read onve they were high than the Rockies are now millions of years ago.

nd one could hike the Rockies starting in Alaska and go all the way to the southern tip of South America or about what 20,000 miles?

Yes, Gary. I've read in numerous sources that the Appalachians were at least as high the Rockies and that the Pangean range they were originally part of is believed to have been higher than the Himalayas. Time changes all.

Good call on the pack raft, Trout! Maybe you can be the first to do the whole thing!

Anybody done much of the Canadian section?

You know Alan I have not done anything on the AT farther north than Clingman's Dome in the Great Smokey Mountains (more correctly the Unaka's) of NC.

I have often wondered if I would enjoy the Canadian section more based on the notion that it would have less traffic (?). I have not done any research to amount to anything, and I would have to bone up on my cold weather skills, but I think I would love it.

What do you think?

I know little to nothing about the Canadian section. I tend to do better in cooler climates than the hot, humid sections in the south.

I gues these days one would need a passport/visa to hike in Canada?

Yes. I was thinking of a family road trip to Thunder Bay, Ontario for a weekend (about 6 hours) and we would need to bring our passports as well.