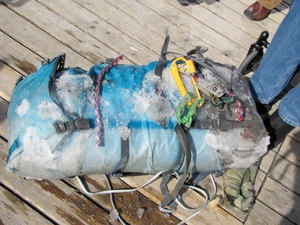 In 1991, Jeff Lowe abandoned his pack on the North Face of the Eiger. Last Friday he got the solidly frozen pack back after two ice-and-snow-encrusted decades on the Nordwand.

Lowe had completed a nine-day, solo, winter ascent of the route Metanoia in 1991, when he couldn't find any anchors at the end of his rope. He untied, left the rope and his backpack behind, and free soloed the last 50 feet to the summit ridge. There he was rescued by helicopter before a big storm.

The pack has been on the Eiger ever since, until last Friday when climber Josh Wharton spent two hours chopping it out of the ice.

Check out the video below of Wharton retrieving the pack and presenting it (along with a jumar, Gibbs Ascender, and some bits of rope) to Lowe. The pack's contents will be explored once it's completely thawed.

Lowe's Metanoia route has been attempted, but never repeated, since his first ascent.Ueli Steck is expected to make an attempt this year in connection with the film Jeff Lowe's Metanoia.

This video is catching fire, I've seen links pop up all over the web.  Well worth watching.

Unreal. Can't wait to see the movie. I would imagine that Jeff would rate his pack 5 stars on Trailspace...

If you're curious, like I was, the pack was a VauDe backpack.

I read the pack brand as well and was amazed he wasn't using a Lowe Alpine pack.

I have some Lowe gear by the Lowe brothers, both Lowe Alpine & Lowe Pro, but I didn't know until recently Jeff Lowe had M.S.

I ran across an article recently that talked about his climbing history and battle with the disease.

Oddly enough, I have an old VauDe pack also.