I lost my Yellow Lab X, Pooch, about 9 years ago now, my bping buddy.  I got along fine for a few years, but then started wondering why bp trips were losing some of their appeal to me, especially in the Fall when the days are so much shorter and temps cool down quickly after 3:30 or so and there is next to no one if anyone around to chat with, even for a minute.  Finally hit me after Pooch had been gone for a few years, that I was truely alone out there, no one for miles if that close. (Talking about the Mt Whitney, Ansel Adams Wilderness areas).  So I had been telling myself for a few years now, are you still into this stuff?  Small group trips were still interesting, but I found myself doing mostly solo trips, either for two nights or 5-8 days on vacations depending on the season and distance traveled.  I started collecting old bping and camping stoves two years ago and have really gotten into it for some reason.  Anyway, this last Sept., right after the Labor Day weekend and returning from a Stovie meetup at Diamond Lake in Oregon, I figured I needed to get out more to use my collection, otherwise, they would hardly see any real use other than just being fired up in my garage now and then.  So now, with renewed interest in bping, I try to get out a few times a month or more, either leaving right from my yard or driving a short distance to start hiking or a car camping a few more times to use stoves more suited for that activity.  I live a quarter mile from Forest Service land.  I must say, I really look forward to my overnight trips again, no matter the weather, although I do prefer the heat of summer.  Unlike my vacations, I bring two stoves to use on my weekend trips, with so many, they would only get used once a year, depending on whether it was designed for tramping about or household use.

Yours is a curious source of inspiration, but whatever it takes.

At various times in my life motivation was partially bolstered by:

Good for you, Duane! Hit the trail!

have you seriously considered a new dog? quite a few years ago i lost my 12 year old rotti and vowed i would not get another dog and didnt for about 10 years when i found a little white ball of fluff in the form of a great pyrenees pup i couldnt resist. it didnt take long to realize how much i missed the kind of company only a good dog can be. i became very attached to him very quickly and when i lost him at 18 mnths i was a little ashamed of myself for greiving for him more than i had for people i had known and once again i told myself i didnt want to go through the loss again, i was able to convince myself of that for about a month and then i was on my way to north georgia to pick up my new baby, a pretty little badgered ball of fluff who would be named for the one who instilled in my a great admiration for the great pyrenees " jug " which is short for jug head. jug head came about because they are a stubborn breed but once they bond they are an extremely loyal and loving dog. jug the first at 110 pounds still wanted to climb in my lap everytime i sat down, he was never trained to leash but jug the second will be and he will be my traveling buddy.

personaly i dont have a big circle of freinds but the freinds i still stay in contact with and spend time with have been my freinds since the mid 70's. we dont get together very often anymore because of work and family, two of us are constantly involved with children and another travels for work almost constantly, he came in Christmas day and left the day after Christmas and that is the norm for him. when we do get together for a day  or two it is pretty important to us, there is nothing quite as comforting as having freinds who know all your "Demons" and all the stupid sh_t you have pulled and still have them hold you in high regard, hell me and one of em got in a fist fight one saturday night and hit the woods the next saturday morning on our regular deer hunt. thanfully we have matured past that now but that is the kind of exceptence that only your brothers and sisters might usually give, a freind who provides that and who you can share a common love of the outdoors with is a true blessing and there is not a day that goes by that i dont think of them and miss there company. i am truly thankful for them and that motivates the planning of trips that have been as long as a year in the planning.

choose one or two freinds that you really have a kinship with and plan with them, planning that way is alot of fun and the exitement is contagious.

good luck to you and i hope you find that old passion soon.

My work situation does not allow me to get another dog at this time as I work out of town and don't get home until Friday night. :(

Funny, my dog was my companion and now I am attached to my stoves as something to use, that I look forward to seeing in action.

I still get out bping as much as ever, it was just more enjoyable with Pooch.

It's good to get outside, whatever the reasons might be.

when i hike in the winter, we do redundant stoves.  so if we're in a group of three we bring two stoves, and in a group of four, we'll have three or four stoves.  it's a backup against stove failure, which can be a critical problem in the winter, and it also accounts for the possibility that the group might get separated for some reason, though i try at all costs to avoid groups splitting up.

my backup is an MSR XGK i bought in 1986 or so, well-maintained.  still a great stove.

I've been using some old G's and I love this one GK I have that I got lucky on and almost gave away thinking it was a different model of which I had one already.  Sorry HJ.  I have a Dragon Tamer cap for my loud Dragon Fly stove, runs so quiet now.

I will try to leave a bag packed.  I'm embarrassed to say that I haven't been on an adventure in too long.  Part of it is a busy work schedule, but a bigger part is having gear scattered in three houses.  When' I'm organized enough to have a weekend bag packed, it's an easier matter to grab it, buy some food and fuel and head out.

Small luxuries help too.  A teeny bottle of scotch, some sage to burn, a good book and some good coffee.  Weighs less than a pound all together, but it has the power to turn a rainy, cold day into something resembling nirvana.

I can relate to your story.

I spent a few years backpacking with a very cool dog, we went to some great places together and although I went solo, I was never alone. 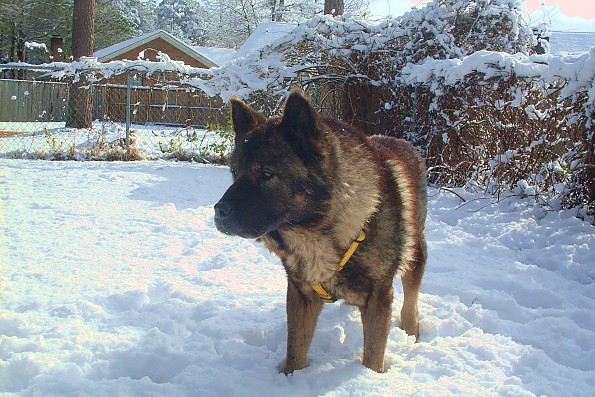 For me backpacking with a smart & alert dog was a joy, I learned a lot just by watching him, he made me a better person.

Sometimes he would walk slowly through camp observing an insect traveling on the forest floor, and I in turn would watch them both marveling at their own unique abilities to do things I could not.

I often wondered if Boo thought it was cool that I could drive us both to the trailhead, he certainly knew what to do when we got there.

I am not sure if I will get another dog just yet, it was a lot of work to do it right, but very rewarding to me.

For now I an mostly doing solo dayhikes and short weekend trips, sometimes with family or friends.

My current motivation is to study and learn more about the plants & animals that surround me while I'm out there.

Pooch and I had been in some tough places.  Literally having him almost fall 10' to get down to me in a narrow chute above  El Lake in the Trinity Alps here in CA.  Scrambling down from Ediza in the Ansel Adams Wilderness, you name it, he did it with me.  Also, he was partially trained in SAR, cool watching him do his first alert. :)

I was terribly ill with a poorly-managed chronic disease for a pretty big chunk of what most would consider their "glory days", if you will (around 19-25).  Following a pretty big surgical procedure and a strict medical regiment, I have enjoyed a rebirth of sorts.

I used to love tramping around my parents' back 40 as a youngster, but never knew how much my outdoor experiences meant to me until I could no longer enjoy them.  During my illness, I ended up discovering Muir and voraciously read everything I could about or by him.  I don't doubt that many here have some sort of visceral or spiritual fellowship with such an individual – one whom we have never met yet has no difficulty in identifying those deepest longings within us and stoking the fires of our imaginations.

Muir taught me, amongst many other things, to chart your own course.  Now that I am healthy, I try to do that lesson justice.

see you out there

There's always a reason NOT to go.

Ignore those, and look for reasons why YOU have to go.

As Callahan says, see you on the trails.

Pooch sounds like he was a super dog!  My bud was Rusty; but he was really my grandpa's dog and left the home place when g'pa died.  Saved my b... a few times, too.  Glad you've joined us here on Trailspace.  Get that camera and take us with you on even a SHORT trip--we like pictures!  Look forward to hearing from you again soon.

Last weekend I was off to extreme northern CA with some of the CA group I do some trips with.  We went to the Lava Beds Nat'l Monument near the OR border for car camping, caving and some beer drinking.  Good time, the young ones could almost keep up with me.  Hiking that is, got to use some of my old stoves, Primus 111B, MSR X-GK and a Coleman 502.  My stoves, my new motivation, all 70+ now. :)  I posted some pics over in the Action Gallery on Classic Camp Stoves.  I'll have to see if posting pics here is the same as there as I'm not too puter savy, even though I have to work on them all day.

I am still stuck at this damn computer

No worrys callahan, So am I. But today I ran 15km to start it. Looks Like computers arent that bad after. Still...