The widely used insect repellent Deet appears to be losing its effectiveness
against mosquitoes, scientists say.

NPR had a report that said much the same as the one above but added two caveats,  the test was on one species and they did not measure how long the desensitization lasted.  I guess just to be safe we should add gin and tonic to our back country gear

Garlic works better and it doesn't rub off.

My method for use. When cooking dinner or pasta, I chop up one clove of Garlic and mix it into the pasta. Later in the body it comes out in your sweat pores and keeps the bugs including the Vampire Mosquitoes away, or at least from biting! I started using it in Alaska 35 years ago, were they are voracious.

I also will just eat a clove or two of garlic, I have acquired a taste for it. Strong onions will work too and I often saute them into potato and pepper meals on the trail. Or an thin sliced onion,butter and salt/pepper sandwich! My mother got me used to those when I was a kid.

You can also use the garlic tablets in the vitamin isle at the store. Or powdered garlic in the seasoning section of the store. 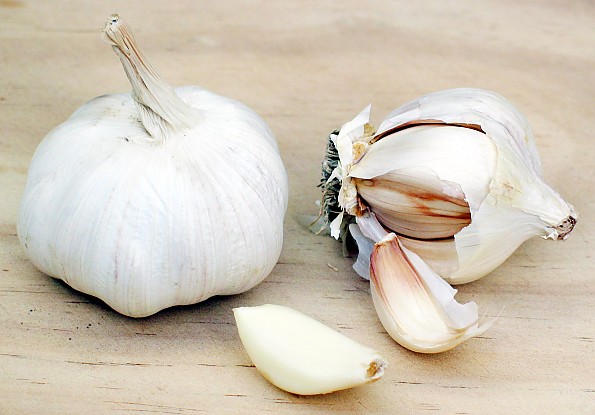 I never heard of that. I just wear long sleeve shirts. sometimes I'll hose em down with permethrin if they are really bad.

I regularly eat garlic cloves as well(Gary I remember we spoke of this a bit back.) On my summer trips I will start chomping one down a day 2 days prior to my departure. Then I eat one clove daily while on trail.

Skeeters haven't been much of a problem for me. Growing up I use to eat cloves all the time but due to the expressions I have received when having face to face conversations I have switched too tablets. ;)

Only problem that makes these somewhat ineffective for trail use is that they do not contain the oils that a fresh clove does.

The greatest blessing of my genetic inheritance:  immunity to bugbites. Mosquito, blackfly, deerfly (we call those 'stouts'), also the giant deerfly mutant we call moosefly, and those tiny buggers (noseeums?) called sandflies, they all love the boggy spruce woods here. Of these, only the mosquitoes (yes, there's a Newfoundland word for them, too: nippers) leave a mark on me, a red bump that disappears in under 5 minutes and never does itch.

Every year I worry I've lost this immunity, but not so far, knock wood. Doesn't make inhaling and eating them any fun, but thank heaven I don't suffer like some do. I wonder if this immunity can be attained? Anecdotal evidence here says yes, but it takes a lot of discomfort to get there, as in weeks of bites for years on end.

But then I'm not allergic to anything, and it is an allergic reaction. I hear antihistamines can help with the post-bite suffering. And suffering it obviously is! I've seen people literally scratch their skin off. Must be agonizing.

And then there's the old-feller's method: keep a lit pipe stuck in your mouth at all times.

Islandess, can I get a blood transfusion? On the other hand, you sound like some kind of vampire, so maybe not.

I bought a tin of stuff that looks like boot polish and smells like a burnt turd but the last few years the midges have been less and we have just surrendered summer to them anyway. 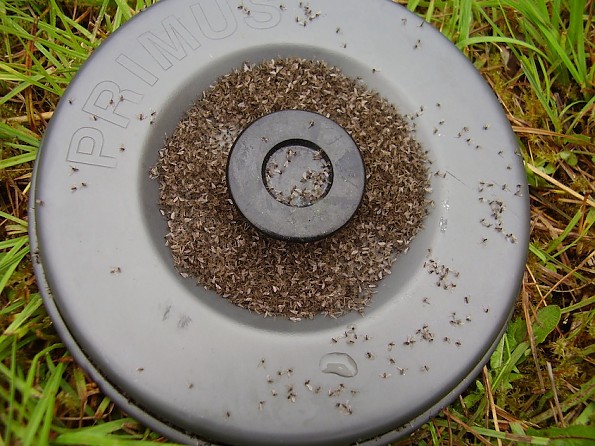 On a trip on the Pelly River in Yukon Territory, I ran into a flying insect that eats mosquitos. I don't know what it was but it looked like Bull Dog, aka as Moose Fly, which is a type of Horse Fly. I was watching perhaps a dozen of these flies land on the netting on the tent for a second and then fly off. It took me a moment to realize they were landing on mosquitos and chomping them. They could be a type of wasp.

I've tried multiple types of repellents over the last forty odd years. Deet has always been the most effective. Vitamins, garlic, all worked to some extent, but limited in how long they last and and how effective they are for the volumes of various biting insects in the North. If the bugs are bad, nothing works better and is less toxic than a bug shirt and bug pants. The cotton version from the Original Bug Shirt Company gets my vote.

That said, my FN friends don't seem to have a problem...t shirts and baseball caps, and no bug repellent. Maybe it's the always lit cigarette.

When I was in Alaska in the late 1970's I met a lot of Asians wearing a small round container around their necks giving off smoke. When I asked what they were they opened them to reveal a mosquitoes coil like the one's Raid had on the market.

But if you mix the garlic into food, your breathe doesn't smell like garlic and even when onions are mixed into foods they don't act on the breathe, but do work on the bugs. 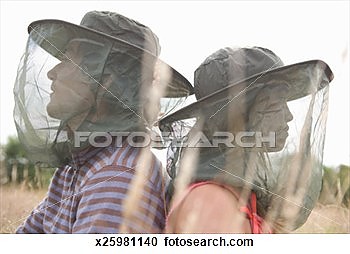 here's another way to combat them, very popular in Alaska too!

Here's a link to the Original Bug Shirt Company. I have the cotton version, ten years old and still going strong.

The worst case of black flies I have ever experienced was on the Back River in Nunavut. The only thing that saved me from going mad was DEET and a head net. Even so, the flies would swarm around my head and crawl into my ears and eyes and along my wrists. After a while my immunity increased and I would not notice them that much. Although, they would still wind up in my food.

Mosquitoes are the predominant pest up here and I have seen people running out of the bush, cloaked in clouds of them. Again, DEET is the only thing that seems to work and people from all backgrounds vertually shower in the stuff. Fortunately, summers are very short; only about a month long.

The severity of the reaction people have after being bit by either pest is dependent on the body's histamine production, not on any perceived racial superiority. For that matter, I have seen caribou stressed to the point of death from mosquitoes.

For me it's protective clothing, DEET, and Permethrin.

I have tried big doses of B vitamins, garlic, skin so soft, citronella, coils, you name it, I only get relief with repellents.

About that immunity: I know it comes from my mother, and it seems to include immunity to chicken pox, measles, mumps, etc. as well as a strong immune system overall (lifetime score -- 3 colds, 1 flu, 0 sore throats or earaches, thanks Mom!). My brother didn't inherit it, so maybe an X chromosome thing?

Anecdote time. When my brother got chicken pox as a kid, my parents wanted me to get it too, because better to have it young. So they secretly told him to try to share it. Being a little brother, in agony while big sis wasn't, he was only too happy. I found out later he was drinking from my glass, using my toothbrush and towel, licking my spoon, lying in my bed, etc., so I must have had quite the virus load. Didn't work. To his great disappointment. But my mother has never had it either. The little isolated village where she grew up relied on her to play nurse for anything contagious.

So if you know anybody who never got chicken pox, in spite of exposure, maybe they have this too. Wouldn't it be great if they could develop a bugbite vaccine? I'd donate to the cause!

Those deer fly bites are the worst! They hurt a lot and I always get them behind my ears. I'm left slapping myself in the ear, looking like an idiot, cause the fly is long gone with half a pound of my flesh and now I've just got ringing ears and a welt.

Makes me wonder if we really are the smartest ones out there. I can imagine it would be pretty fun to be a fly. You get to go bite someone and then they are left slapping themselves. There is probably a show on some special fly TV of all the humans hitting themselves. The fly family gathers round to watch the 'best of' every Sunday night.

the black flies run off the mosquitos. black flies have never been a problem for me, but the mosquitos are. I always get bumps. I put preparation H on them. it works. (stops itching, shrinks swelling)

I think Horse Flies are worse than Deer Fly bites. They land strip off a little steak and by the time I feel them doing that they are gone or I swat them and knock them down and see the little strip of flesh missing from me!

It is best not to attract the biting insects in the first place. Unfortunately, they home in on sources of carbon dioxide, and cessation of breathing has its own hazards. The home CO2 traps really work; however, they aren't highly portable.

Another study (Brady et al., 1997) attributed the
differences in human attractiveness to less CO2 in the
expired air of the less attractive individuals. More
recently, Mukabana et al. (2004) reported allomonal
activity of human breath, which would explain why
differences in the quantity of expired CO2 (Brady et al.,
1997) would result in variation in human attractiveness.
Other factors considered to cause variation in
attractiveness between individuals are differences in
skin composition and microbial flora on the human
skin (Knols, 1996; Takken and Knols, 1999).

One way to reduce your attractiveness to insects is by avoiding the use of dark colors in clothing and gear. Black is an attractant, according to tests. I have found most shades of blue are attractive to biting insects.

Age is another factor. Young children are less attractive to mosquitoes than adults.

So, it would be beneficial to glue several small children to yourself when going into mosquito territory.

Those deer fly bites are the worst! They hurt a lot and I always get them behind my ears. I'm left slapping myself in the ear, looking like an idiot, cause the fly is long gone with half a pound of my flesh and now I've just got ringing ears and a welt.

Makes me wonder if we really are the smartest ones out there. I can imagine it would be pretty fun to be a fly. You get to go bite someone and then they are left slapping themselves. There is probably a show on some special fly TV of all the humans hitting themselves. The fly family gathers round to watch the 'best of' every Sunday night.

I've heard the same thing about DEET. I've even tried to use some of that DEET free crap. And thats all it ended up being. Our bugs in the south are nuts. Our winters never effect them enogh to do any damage to the population. We rarely even get a freeze. The ticks and chiggers are bad enough, but between the horse flies (or sand flies where ever you are) and mosquitoes... you can put saddles on those things and ride them back to the trail head. After giving the hippy enviro fluids a try with no results. I'll stick to the classic Deep Woods Off. Avoid the standing pools. Post up near a flowing stream. Clear out all the debri around camp, and start the fire. I hardly ever come out with more than a bite or two. Although when we hit the swamp, we pretty much bathe in the stuff. Avoid the crotch area... trust me. Or the result of squating buck naked in the stream washing your junk will be the talk of the group for years to come.