I figured this was done in the backcountry so I just placed it in this forum but...

Would any of you do this to someone or am I just a safety 1st kinda guy?

Based on this video I would say he is a complete jerk who has a score of zero in the wisdom collumn.

If he did that to me I would have to go all 'Hank Hill' on him.

Safety first is the trademark of wisdom & experience IMO.

Wow, what a jerk! How would he have felt if she got hurt or worse, prob wouldnt care by his attitude after her comment. If he did that to me, he would want to be long gone before I got off that rope. Way past Hank Hill, more like Fight Club.

One of the things I emphasize in my climbing instructor course is "Challenge by Choice." There are three levels of challenge for any activity -

1. Easy for me today

It is ok to present a challenge to encourage someone to extend their comfort zone a little (providing full safety precautions are taken) to get them to extend themselves. But it is not ok to push to the extreme extent that the bozo in the video did. That is a guaranteed way to produce serious injuries or even death.

I got a really bad feeling about the situation in the first couple seconds. It is not clear what the gear is, what the anchor is, etc.  No helmet. Is that a rope or a bungee cord? Lots of questions here

I also have to wonder whether the scenario is staged - note the quick cut from on the platform to the distant shot, with a very professional transition of the image. Maybe the film crew were very talented amateurs (current video editing software is easy to use, after all).

i vote for staged.

What your watching is a very small snippet of a long movie including all of the details of the days events.  It includes the answers to your anchor questions as well a little insight to the push.   I suggest watching the whole thing.

What your watching is a very small snippet of a long movie including all of the details of the days events.  It includes the answers to your anchor questions as well a little insight to the push.   I suggest watching the whole thing.

Thanks for the heads up!

I think he deserves an act in kind, but with no rope at all. LOL ;-)

If I wsere the girl I would be surprizing him by stashing the pant load I produced in someplace near and dear to him.  At the very least.

Mozee, could you link to the whole thing or did you just find it on youtube. Maybe im not using the right keywords.

My friends kids showed me this so it took me a little searching myself to find it, but this is the making of; where the guy gives his (spoiler alert)  EX- girlfriend a push.

And this is the finished movie.

I just rewatched the video when I checked the link and there was a little missing from this one that was on the first one I saw.  The girls reaction when she reached the top, she wasnt very upset, though she did dump him later I guess and a few other minor details.  If I find them I'll post them.

I knew what you were talking about even before I clicked on the link. I first saw this a few months ago and when I showed my wife she said she would have killed me if I had done that, I believe her and think a trip to the attorney would be the result. I think they were having fun that day filming the movie and she may have done it if he would have allowed her to choose.

I have looked at the other videos this guy has made and they appear to be a safe group even if what they are doing seems nuts. Another video is of swinging off Corona Arch near Moab. I have a photo of the arch in the dog thread with my wife and pups in front of it. I have seen people rappel off this and swing but never like in the video. What I want tp point out is that even though this guy is "Safe" and plans for the events, the video itself encourages less thoughtful people to try it as well.

I am not sure if the guy I am about to mention has seen the swing video off the arch or not so take my comments with a grain of salt. Just last week a guy was rappelling off Corona Arch and didn't plan well enough. Either his rope was too short or he slid too fast. Either way I got word the other day that a guy died after falling from Corona arch. Sad.

Corona Arch is in the Background in this photo. 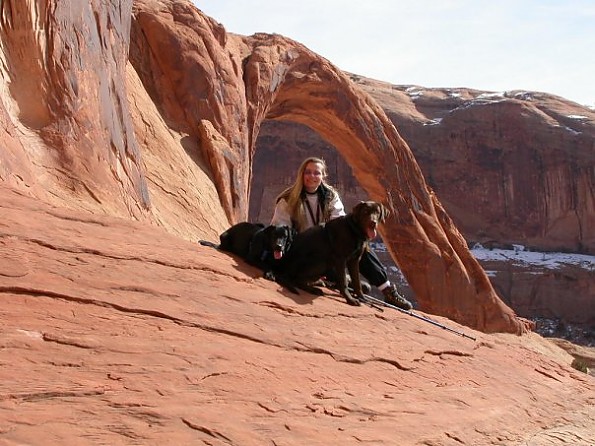 OK I looked it up. The kid died after miscalculating the length of rope needed to do the swing. His rope was not too short, it was actually too long and after swinging off, he hit the ground. Yikes.

Lets have fun but be safe out there my friends.

I read up on that accident as well.

Many people were railing against the "insanity" of anyone doing something like that, and "you can't cheat death forever." Unfortunately, their perception of what appears to have happened and why is very flawed. The guy was part of a group who had been safely swinging already, with no failure of their system- the accident happened because he made the tragic mistake of attaching the pendulum line at the wrong point.

Though certainly there is a higher risk of harm engaging in such activities than others, the same is true of climbing, or skiing, or skydiving, etc., etc., etc. The folks largely decrying the activity are uninformed and reactionary, and want others restricted to conform to the level of knowledge and ability at which they exist.

The guy who died made a horrible and very final mistake, but it was that alone: a mistake.  Hopefully we all won't be tempted to vilify any sport because someone makes a terrible miscalculation or errant step.

Respectfully, setting up a rope swing off that arch appears to have been a bad decision, period.  I'm assuming that is why, in the wake of a video that went viral, the state park authority prohibited local adventure companies from setting up rope swings in the area.....two months before the fatal accident that recently occurred.  a local outfitter was quoted in one article about the accident:

“We received a lot of calls about it after the video came out, people wanting to know if we could take them there to rope-swing,” said Emma Madera, co-owner of Moab Desert Adventures. “We did have a permit for the area and we took people to rappel off the arch, but we wouldn’t do rope-swinging. It’s just too dangerous.”

If it's too dangerous for people who do this every day for a living........