Don't Have a Bad Bear Day! 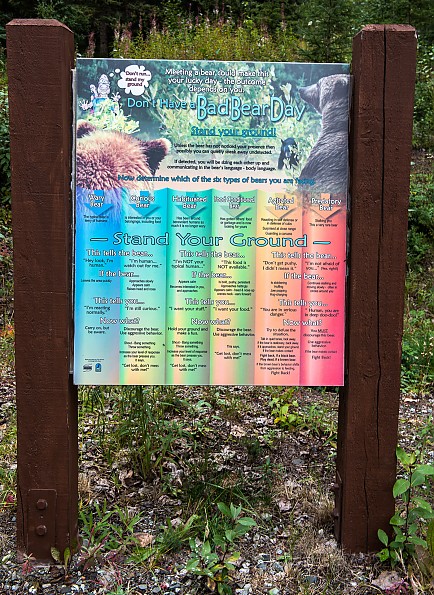 Black Bear scat is smaller, and filled with nuts and bears.

Grizzly Bear scat is larger, smells like pepper, and is filled with little bells.

Thanks, Bill. Good information for anyone headed out into the bush.

Thank you for posting this, Bill, that's a brilliant use of graphic design, a lot of information presented very well.

I wish it also had advice about eye contact. For the vast majority of animals (not dogs, but almost all others) prolonged eye contact is aggressive and can't be interpreted otherwise. A staredown has to end in fight or flight.

The first thing I do when I meet an animal is make eye contact and close my eyes. Then I'll blink as slow as I can, looking away and back, keeping my head moving. It's the animal equivalent of the peace sign. "Here we are, and I trust you enough to close my eyes on you and look away," is what I'm saying. "I'm not afraid of you, and I'm not interested in attacking you."

Sometimes I'll back off, but honestly -- not always. Depends on the situation. The animal may well stare at me for quite some time, but eventually it'll either leave quietly, go back about its business as if I'm not even there, or approach me.

At this point, I assume it's just curiosity (some animals I meet rarely if ever see people) and not aggression, so I just keep doing what I was doing. Slow, calm, no staring. This has led to some profoundly rewarding moments. Including one with a mother black bear and her cubs.

But maybe this is bad advice to the unfamiliar, and I'm only getting away with it because I've got some experience with reading animal body language, plus I'm not a large male animal and not in a group?

Anyway, yeah. "Avoid eye contact." It's a human instinct, but it means something different to animals. I think people should be made aware of it.

I'm sure hoping I didn't need to read that, but thanks for posting it!

Don't worry, LoneStranger. 95% of the time, you can think of bears as 'large ambling herbivores'.

Then there's that other niggling 5%...

I saw that sign in a campground along the Glenn Highway in southeastern Alaska.  I agree, they did a great job of illustrating and presenting the info.

When I was in Denali park a ranger friend told me about a man who he approached photographing a bear (grizzly) as his wife was offering it a sandwich from her hand. When he explained to them that the bear would have killed her they said they were used to feeding bear by hand back in Yellowstone, that was in 1978.

yeah, want to make friends? feed the bear a sandwich! after all, they are just big dogs, aren't they? :)

If you've read "A Walk In The Woods," Bill Bryson recounts a story of people putting honey on their baby's hand in order to take a picture of the bear licking the honey off. Instead, the bear allegedly bit off the baby's hand.

Bryson is given to embellishment. So take it for what it's worth... 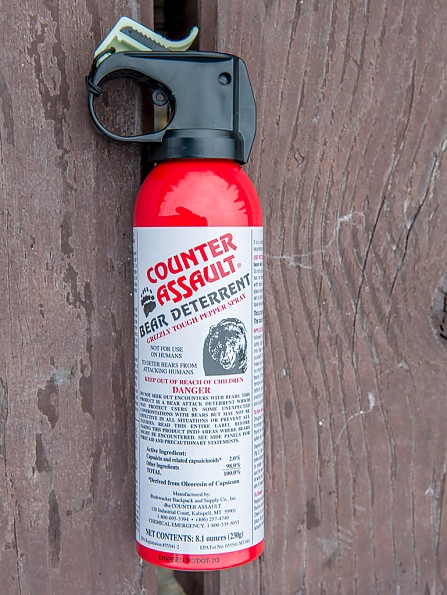 Gros Morne National Park has a two-armed fiord in it, Bonne Bay. The road around the bay twists around cliffs and plunges into coves like a roller coaster.  (So either treacherous or super fun to drive, depending. :D)

One day I drove into a sharply curved dip between blind crests to see cars and RVs parked along and on the road. Yes, on it. Holy road hazards, Batman.

I stopped to see what the hell, and people were gathered at the base of a tree taking pictures and reaching into the branches. Two tiny black bear cubs up there. "Where's their mother?" I asked. Blank stares.

I'd just come from work at Parks Canada, and was still wearing my uniform, so that helped. Cripes, people.

But we don't know what we don't know, I guess. Plenty of places in the world where I'd probably do something stupid and fatal right away. Still...

Parks Canada now has bear jam interpreters. Instead of moving people along, they try to keep people a reasonable distance from any animals, and they control the traffic flow. Better for the 'visitor experience', and it limits the amount of animal harassment, but the tourists will still stop smack dab in the centre of a lane and park their vehicle there while they get out to take pictures.

Bear jam interpreters! Somebody had a good idea.

I think it would be hard to do that in a park like Gros Morne, though. It was superimposed on an area of tiny fishing villages connected by a) water and b) sled dog mail routes.

When the surveying and topographical work was eventually done, those old sled paths were almost always the best possible routes! (I think that's pretty neat.) Even so the terrain makes some of the grades and cliff-cuddling turns a bit nuts for a two-lane paved road with mostly no shoulders. You might have to drive a while to find a safe spot to pull over. It's a big park, too, and the bears, moose and caribou might show up almost anywhere. There are occasional Park road signs that say basically "no feeding, pull over safely, stay in your car."

Still, that's a really good idea, traffic-cop-interpreters. It makes me happy that some parks might actually have enough staff to do that.

(Another time...have I already told you guys these stories?...I found a nice couple trying to put their toddler on a moose's back for a picture.)

If bear switches from aggression to feeding fight back...that might be one of the most terrible things I have read in a while:-(