Are you in over your head?

I saw this post by a backcountry ranger in Wrangell-St. Elias National Park in southeastern Alaska, the largest national park in the US.  It struck a chord with me, because although I didn't embark on any backcountry trips while on my recent trip to Alaska, I observed the vastness & wildness of the state even from the highway, and I have wondered what it would be like to experience it.  It seems backpacking there sounds like  a totally different experience than what many of us know, even in the most remote areas here in the lower 48.   Apparently it's more of an "adventure" than a "hike".

Anyway, interesting reading, and a good reminder of what "real" wilderness is like ... (no offense intended to those among us who are already experienced at this level of wilderness travel)...

Bill, thanks for the great article. As much as I am in the outdoors, my 12yo son continues to ask me to do a hike into the Grand Canyon. As much as he (and I) wants to do it, I have no plans on attempting it--at least not for a long while. What I've read about such a trip makes me feel unprepared for the encounter.

Your post is a good reminder that just because you can do it and want to do it doesn't mean you should do it.

It is a nice area extending into Yukon and BC. My wife and I did some hiking there a couple of years ago. I'm not sure about the isolation and wildness though as a highway encircles it, a road passes through it and there is a town in the middle of it.

In spite of North's humility, I find there is a difference between the backcountry in the lower 48 and bush Alaska and Canada. The weather is much more harsh even in summer in the North and the chances of getting any help are pretty low unless you are really lucky.

Ignorance. I just don't know enough about hiking in hot, arid regions. Given the GC is a 23-hour drive, there's not a lot of opportunity to do shorter test trips.

I actually went to a presentation on hiking the GC at the St. Louis REI a few years ago. I made a 2-hour round-trip drive to see some woman show her vacation photos.

Goose, I'm 100% with you on this. I'm in the pacific northwest and the idea hot and arid areas just scares me. But then again anyone from that area coming here in the winter would bother them too. In order to do that would require new gear. Plus many 2-3 day trial hikes in some area similar to where I was going. Going out to do something and not being prepared is never wise.

Went to the badlands once. That was enough. lol

Ignorance. I just don't know enough about hiking in hot, arid regions. Given the GC is a 23-hour drive, there's not a lot of opportunity to do shorter test trips.

I actually went to a presentation on hiking the GC at the St. Louis REI a few years ago. I made a 2-hour round-trip drive to see some woman show her vacation photos.

I totally understand. But if you were doing it on one of the more "travelled" routes the first time, I think you would find it was not beyond your limits at all. It would give you the knowledge of what that can be like, but not get you away from the potential help or extra water. I intend to do it this year if I can get it planned. Or at least get flown to the bottom and hike out. (prepping for Machu Picchu).

The terrain in the Alaska park doesn't look that different from what you'd find in the Rockies, but there are a lot of people who aren't comfortable with scree slopes. I've had to talk a few people across them, and on occasion turn back with ones who looked like they might panic and freeze.

GoG has a good suggestion for learning about the risks of new terrain. In a place like the Grand Canyon, there are well-established routes with clear ratings of difficulty. You should be able to find a few (especially by checking with people on this site) that would let you get an understanding of what new factors you'd have to consider.

A group of us from another forum met in Anchorage, then drove to Wrangell-St Elias area.  Flew by bush pilot out of Nebesna, dropped off and hiked down for three days, picked up again.  Windsock in a willow was a while plastic grocery bag.  I wished for more "Alaska" scenery.  I'll have to go back.

Here is a picture of my wife and I having tea on a scree slope in the Rocky Mountains for comparison. 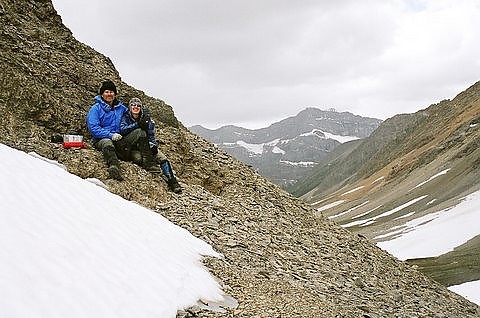 The elevation was around 8 to 10 thousand feet, whereas the elevation of Mount Sanford in the Wrangell Mountains is much higher at around 16,000 feet. The snow layer, even in summer, was lower down the slopes and the trees were non-existent beyond the riparian zone of the Sanford River. Their proximity to the Gulf of Alaska meant the weather was even more unpredictable than what I ever encountered in the Canadian Rockies. There were also no real trails; we followed braided rivers, white with glacial flour, before heading into the alpine country.

We are planning to head down to the Wrangells again this winter. If the weather co-operates I will put some pictures on this site.

The typical angle of a scree slope is about 40°. If it gets much steeper than that it becomes unstable and slips when it gets wet. Simply a matter of the physics of the material, so one scree slope will look much like any other.

The Wrangell range has mountains that are higher than in the Canadian Rockies, but the ranger was talking abut an established trail not a summit ascent. While the photo shows a drop-off below the scree downslope from the trail, it doesn't look that treacherous. That doesn't mean there aren't other features we can't see in that one photo, though.

It's a spectacular park, though, from what I'm told.

Topic: Are you in over your head?