We're back from a short backpacking trip to Yosemite (we'll post a Trip Report in the future) but we thought you might be interested in seeing just exactly what the damage from the Rim Fire looks like as you drive by some of the burn area on Highway 120 through  Big Oak Flat and into Yosemite.

The good news?  There are huge parts of this fire that are described as having  burned---and yet still have plenty of green trees in place.  The fire in these areas was obviously not so hot, and burned only the understory of the forest.  In fact, the larger trees seemed to do better, probably because their lower branches had long since fallen away, and there was little to catch fire at that lower level.  As long as the bark and cambium layer wasn't damaged, those trees are fine. 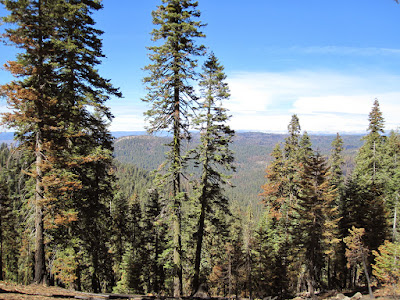 The first photo shows an overview of the section of the fire that burned in Yosemite...with both green trees and burn damage. And Highway 120, at forty feet wide or so, was a pretty good firebreak in a lot of areas.  You can see where the fire burned the understory on one side of the highway, but the fire crews were able to keep it from crossing into the forest on the other side of the road.  Nice work.   There are also some areas where the only thing that didn't burn is the building along the road---as the fire burned the entire forest right up to the edge of the buildings. 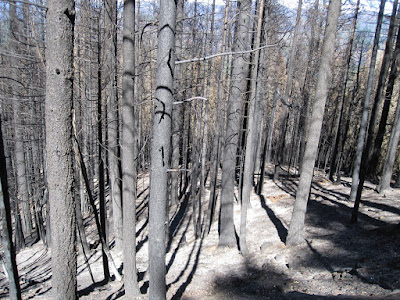 But there are also scenes of real devastation--whole sections of the forest that are now just burnt sticks.  They are clearly trying to log some of these areas right now, so that the fire danger doesn't get even worse...and some of that lumber can be salvaged.

But other areas are just burnt to a crisp.  The trees are all dead, the foliage is burnt off, and the ground is black and white ashes.  It's hard to imagine these areas making a quick comeback, and we've all hiked through enough burned areas to know that ten years from now, many of these black stumps will still be the tallest things in this part of the forest. 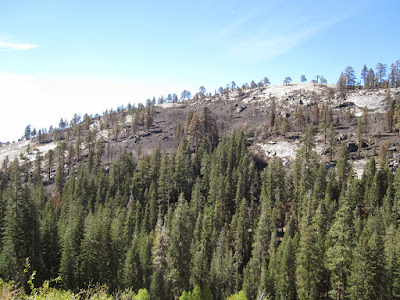 We were particularly saddened by this fire damage up the side of one of Yosemite's distinctive granite domes.  Those trees, which took centuries to grow that big, will never come back in our lifetime. The first clearly shot right up the side of the dome, and burned everything until it ran out of fuel. 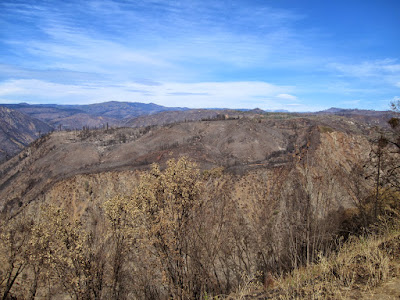 And as a final note, the view from the Rim of the World is pretty desolate.  Here there was as much brush as trees, and it all went up in smoke.  Most of what you can see from this overlook is black soil--and only a few tiny spots where something green might still be

living. And yes, there are still a few tiny spots in the middle of this devastation where there is something green still alive.

We'll have to see how many trees survive.  I'm surprised wackos have not tried to stop any logging.  The fire up north here last Fall in the Feather River Canyon and close to Lake Almanor on the Plumas NF was mostly on private property owned by PG&E and they jumped right on that.  Such a shame.

Some of us may go to Emigrant Wilderness this coming weekend since Lassen VNP may be closed.  I bailed on my bp trip out of Bishop due to improper gear and it looked white higher up before I even got there.  My Fall trips the last 5 years have been touch and go, mostly snowed on or changed. I went on a road trip last year up the CA coast starting at Eureka, then inland at Gold Beach, OR for car camping, a road trip, something different for me.

Thanks for the report. It can be depressing to see the results of a recent forest fire.  The area will be replanted except maybe the wilderness areas. Many of the shrubs and some of the grasses will resprout. The living trees will distribute seed and start new seedlings. Within 5 years most of the area will be green. Forests by their vary nature have enough moisture to recover quickly. The current drought needs to end soon which would really help with the regeneration. Try not to be depressed about it.

I urge you to revisit the same area in the future, and you will be surprised by the rate of recovery.

I hear you.  I also know what it is like to hike through Illilouette Canyon, or Kibbie Ridge, some ten or twenty years after a fire.  The damage is still evident.

I know that fire is a part of the wilderness.  And I know that the part of this fire that was in YNP will probably make a relatively quick comeback.  The national forest area that burned so intensely will not do so well.

Please help us understand the difference in recovery rates between the NF and the wilderness areas. I would expect the NF to recover more quickly because of better access and more tree planting. Are you refering to the amount of fuel and the relative intensity of the NF burn?

Yes--Yosemite suffered damage, but mainly in the understory.  Many areas have a lot of green trees still standing.

In the SNF, the damage was more complete, and there are only black sticks in many areas.

You have identified the difference between a "good fire" and a bad one.

The Sierra Mixed Conifer Forest of Jeffrey pine, white fir, incense cedar and maybe sugar pine. lodgepole pine, and a few others has evolved as a fire dependent plant community.  It evolved to withstand the good fires, recurring in Nature at maybe 15-25 year intervals on average. Ground fires do not typically reach the crowns.

With fire suppression in the last 100 years the recurrence interval is much greater, say 50-80 years resulting in the devasting complete bad fires. These fires almost always burn through the crowns of the forest. There is much more fuel available in the form of dense brush and overstocked stands and lots of dead trees on the forest floor.

Unfortunately we can't give the NPS credit for the difference. Most wilderness areas have never been logged due to their remoteness and short growing seasons. There are exceptions, but this is generally the case. Yosemite also has large areas of exposed granite reducing the fuel available to carry a fire.

The NPS is still trying to figure why the meadows in the Valley are shrinking so quickly. They are a protectionist organization, and only recently it has occurred to them that sheep grazing, logging, and frequent fires were the causative agents in maintaining the meadows.