Are these worth it if I am going to spend, realistically, maybe 5 days a year skiing in the back country? 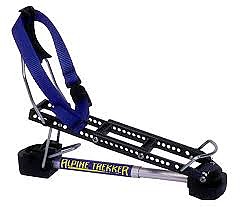 Probably not. Use some skins or add more turns to your routes when ascending hills and you can get by fine without them. We used to go everywhere with the old telemark skis, three pins  and leather boots.

Sage, ppine is right that they are probably not worth it, if you are spending a very limited amount of time in the bc. If you already have alpine gear and want to see if you would like randonee, these might be the ticket. But bear in mind that you will need other gear as well in order to ascend. Skins at least, and possibly ski crampons.

I have had a pair of Trekkers for a number of years. They work quite well. You still need skins for the uphill sections, of course, same as on AT or tele skis. However, I often use my AT skis with the Fritchi bindings or most of the time, use my tele skis (Tele rules! Nothing like the feel and grace of tele turns in deep powder. Free the heel, and you free the soul!). Probably 90% of my skiing in the backcountry and at resorts is on teles. I do a lot of track and skate skiing as well, which is a whole different game, and the only way to do ski orienteering.

AT and tele skis are obviously much lighter (you click the Trekkers into your regular downill bindings, so add the several extra pounds to your already too heavy downhill skis and way too heavy downhill boots, then at the top of the hill, pop the Trekkers out and put them in your pack, strip the skins off and tuck them in your pack, step into your regular bindings, and you are good to go with your familiar downhill setup). Now, getting the Trekkers is a much less expensive way to do backcountry skiing, and you get to use your downhill skis and boots, to which you are already accustomed.

OTOH, getting a pair of very light AT skis with DynaFit  bindings (or one of the other companies' copies of the Dynafit, now that the patents have expired) and some light boots that will fit the Dynafit bindings will give you the full AT/randonee capability at a much lighter weight and more maneuverable skis than your current downhill skis (count on dropping $2-3k for the complete setup, though - prices have really shot up lately).

If you get a full Dynafit AT setup, you will never go back to your old downhill ski setup even in yoyo skiing at resorts. Then again, if you learn to tele, you will only put on your randonee or downhill gear just to remind yourself how terrible skiing was with locked heels.

In any case, once you start backcountry skiing (with real backcountry gear), you will go backcountry 80-90% of the time, and only go to resorts when family or friends insist on it. It's a whole different world out there in the backcountry in winter.

I agree with ppine and Erich. For the amount of time you are talking about you would be more comfortable and would have more fun if you found a place that rented touring equipment.

Sage, Bill is quite right about tele. This was queried before on this site last year, but you need to decide what kind of bc country experience you want. Randonee is heavier than tele, and what you are looking at is heavier still. You will be going up slopes and down slopes, which can be great fun. However, this setup eliminates the flats or gentle slopes for most practical purposes, because it is heavy. You won't have any glide so forget about heading up to Liberty Bell in the winter. Not the right setup. However, if you already have alpine gear and want to  see what it is like to ski untracked Cascade Concrete, then this could get you started. But renting some AT gear as Jim suggested, would be cheaper. And in any event, if you get hooked on bc, you will be buying tele or randonee gear eventually.

Much respect for the wise feedback.

Next question: If i end up with a 2nd hand AT/Dynafit setup will that also work on the 5-8ish days I spend at the local ski hill as well?

So 5 or so days back country and 5ish days at the ski park, will I be served well with just one setup?

The AT gear will work just fine at the Waterville hill or wherever you ski, IMO. Will it ideal for those situations? Perhaps not. But then I use my bc skis on local ski hills, doing tele.

As Bill stated in reply to your OP, you can use equipment that will adapt fixed heel binding systems, allowing you to use your alpine gear for XC travel in the woods.  That said, it has been my observation that a technically sound skier can ski just about anything on free heel equipment (i.e. XC and telemark gear) that they can ski on alpine or rondonee gear.  If the cost if the climbing aid you question is significant, do consider purchasing some used tele boards, and learning the technique, it isn’t as hard as everyone makes it out to be.  In the long run you’ll have more fun anyway on lighter gear.

As for your second question, regarding AT/dynafit gear: I used to be a great skier on alpine equipment, but gave it up long ago, as my tele skills allowed me to ski almost everything I could ski on alpine skis.  So to answer your query; you can use most any ski equipment at the local lift resort, as long as it was designed to facilitate controlled turns while under speed.

Much appreciated.  I do actually plan to ski The Waterville hill more this year. Its not Vale but its close to home!

I gave up downhill ski equipment in the 60s after a bad tib/fib fracture that almost cost me the ability to walk. I went to early American tele equipment, metal edges in 1970 were a novelty in the US and made by a company called Trucker.

Over the years I watched my friends start to use high fiberglass boots, cable bindings, rondonee equipment and bindings like you opened the thread with. Their injury rate increased and sometimes surpassed good downhill equipment. I have used release 3 pin bindings for decades, and rarely ever got hurt. I retired from riding chair lifts and steep bc skiing.

This brings up the philosophical point about ski equipment. Do you really want to have the latest equipment with fine edge control and the cost and risk that goes with it? Or do you want to maintain the older traditions of skiing everything in North America with standard telemark equipment. I fondly remember hills like Ajax and Aspen Highlands in Colorado and looking at the ski lodge between the tips of my tele skis 3,650 vertical feet below me. Three pins, leather boots, and no sidecut.

I like fly fishing, shooting muzzel loader rifles, rawhide snowshoes, canvas canoes, lean-tos and old style equipment. The reward is in the skill, not the latest equipment.