4 ways to predict the weather

I have another one I rely on.  I check my calendar to see if I have a trip planned. If so I know it will rain ;)

"Easterly winds, which blow from the east, can indicate an approaching storm front; westerly winds mean good weather. Strong winds indicate high pressure differences, which can be a sign of advancing storm fronts."

They are way off on this one, as this clearly only applies to parts of the US not in the PNW. If we have sw winds of westerlies, we can have severe storms. The more southerly means precipitation. Northerlies generally mean cooler weather in winter, or warmer clear weather in summer. Much of the weather in the PNW is generated in the Gulf of Alaska. The more time a system spends over the Pacific the more moisture it collects and the warmer it gets.

Amen Erich. For Eastern WA wind from the East means dry heat in Summer or dry cold in winter. 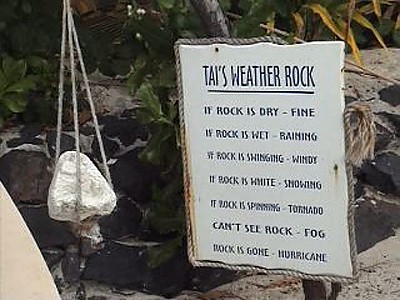 Hahaha my grandparents have that same weather station at their place!

If you go to the High Point of Kansas, Mount Sunflower, you will see a really gigantic Weather Rock.

As others pointed out above, most of the weather lore like the "red skies in the morning, sailor take warning", are applicable only to certain parts of the world. Many of the ones we hear in English originated in the UK and are slightly dependable there. The solar and lunar haloes are caused by high cirrus over-run from approaching thunderstorms associated with frontal systems, hence are moderately dependable ... unless they deviate due to shifts in the jet (happens a lot here on the Pacific Coast).

Best idea is to just get used to the weather patterns in the area you will be in. And look out the window!

Best idea is to just get used to the weather patterns in the area you will be in. And look out the window!

Along with that it is good to remember when you are in a place you aren't familiar with, just because you think you recognize a weather pattern doesn't mean it will occur as expected.  Having lived on both coasts and in the middle I have had to remind myself of this a time or two.  Those of you who are world adventurers have likely seen this to even greater extent.

Topic: 4 ways to predict the weather