Fifty years ago, in 1964, Congress passed the Wilderness Act.  (Yes, in those days they actually got something done!) The US Forest Service is hoping to make a big deal out of this, and we hope they are successful.  After all, this act is what has allowed us to hike for days on end through the Sierra Nevada without crossing a road, seeing a power line, or hearing the noise of chain saws or cars.

And as a way to thank them, I'd like to suggest that we each offer up our favorite wilderness area.  Ours is Emigrant Wilderness, just north of Yosemite, and just a half-hour from our cabin.  It has a lot in common with the National Park, including that amazing granite, but without so many people---and a lot easier permits!

Mt. Grafton Wilderness area Nevada is one of my favs.

11 years ago when I first started going there, this wasn't wilderness area and 4-wheelers, 4 wheel drives and jeeps would drive in.  About 5 years ago they officially made it full wilderness area (with much controversy) and closed it off to ALL vehicles, including bicycles.  I go there every year a couple times and really love that no vehicles go in there now.   Making this area wilderness is one of the best things the govt. has ever done, IMO.

Cloud Peak Wilderness in the Bighorns. Sure glad I climbed up there when I was 18 because I don't think I'll be getting back there again any time soon.  Would be great to go back with something less than the 90 lb packs we carried on that trip though :p 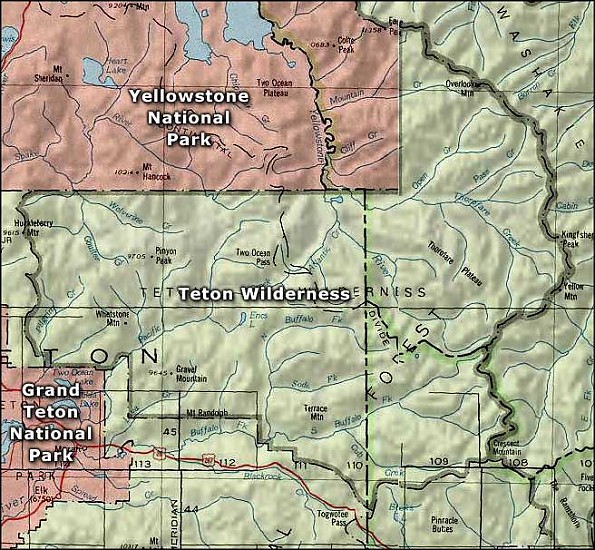 Wow ... so many to choose from.  Ansel Adams ... John Muir ... Yosemite ... not to mention a soft spot in my heart for the Great Gulf Wilderness in NH.

I'm not sure I can pick one favorite :)

I havnt been to the larger forest out west but I have been to Smokey mountains , black mountains, and a lot of the national forests in the east and Midwest. I love the red river gorge area of Daniel Boone national forest. I have hike all of the marked trails and many of the others. I never get tired of going there and on many occasions I've done the four hour round trip drive for day hikes. Writing this makes me want tov take the day off and go now. I'm planning a large backpacking trip out west for fall. In my neck of the woods though, the gorge is wonderful

I like the Teton Wilderness mentioned by Gary P in NW Wyo. Great wildlife and few people. The Arc Dome in central Nevada is another good one in the Toiyabe Range.

The United States was the first country in the world to define and designate wilderness areas through law. Subsequently, countries around the world have protected areas modeled after the Wilderness Act. In 1964 our nation's leaders formally acknowledged the immediate and lasting benefits of wild places to the human spirit and fabric of our nation. That year, in a nearly unanimous vote, Congress enacted landmark legislation that permanently protected some of the most natural and undisturbed places in America. The Wilderness Act is one of the most successful U.S. environmental laws, standing for almost 50 years without a substantial amendment, and, as such, continues to be the guiding piece of legislation for all wilderness areas. The Act describes wilderness as follows:

"...lands designated for preservation and protection in their natural condition..." Section 2(a)

"...an area where the earth and its community of life are untrammeled by man..." Section 2(c)

"...an area of undeveloped Federal land retaining its primeval character and influence, without permanent improvement or human habitation..." Section 2(c)

"...generally appears to have been affected primarily by the forces of nature, with the imprint of man's work substantially unnoticeable..." Section 2(c)

"...has outstanding opportunities for solitude or a primitive and unconfined type of recreation..." Section 2(c)

"...shall be devoted to the public purposes of recreation, scenic, scientific, educational, conservation and historic use." Section 4(b)

My favorite wilderness is Joyce Kilmer/Citico/Slickrock.

Wow, what a young John Denver! Long hair down over his shoulders. I liked his song "I am an old hitchhiker"

I'll second patman's suggestion of joyce kilmer/citco/slickrock. only been there once, but it was beautiful and peaceful.

Now don't post here often. But mine would be like Gary Palmer's reply with the Teton Wilderness and  the adjoining Washakie Wilderness here in Northwest Wyoming. I have been going into this are for over 30 years. I really espicelly love that Greater Thorofare Area in the headwaters of the Yellowstone River and which is the farthest point from a road in the whole lower 48 states. Also espicelly love it around Younts Peaks from where the Yellowstone River originates. In here is innumerable places off the beaten path where people seldom ever go and which someone will have it to all to themselves.

Great list. I have been in all of them except the Bob. Like Yogi used to say, it is too popular so nobody goes there anymore.

Any in Maine or New Hampshire (especially Pemigewasset and Wild River).

Both are within a couple of hours drive from Denver.

Olympic NP in Washington.  Its like walking into an enchanted JR Tolken landscape.

Zion NP or Monument Valley.  "Standing" country  makes you crave for a Marlboro, even if you don't smoke!

I agree, "The Bob" is an amazing place Catmndu.  Some great blue ribbon trout fly fishing like you said.  Some fishermen dream of being able to fish there one day.  Schafer Meadows on the border of the Bob is about as "wilderness" as it gets.  Heavy griz population in there so I was nervous every time I would go in there, but it is such a beautiful and relatively untouched area.

if "wilderness" must be used in the title itself...

then BSP or barren chairbacks in ME

Pecos Wilderness in northern NM has some great alpine lakes right beneath some 12-13k peaks. Lake Katherine, Puerto Nambe, and Truchas Lake are all spectacular year round. Plus it's not too bad of a drive coming from Texas which means I could fit in a trip on an extended weekend. Beautiful, remote, and tons of places to explore.

Linville Gorge Wilderness in NC is my closest favorite. From the rim car campers can savor the views; from within . . . let's just say things get wilder. In VA, I've spent much time hiking in the Lewis Fork and Little Wilson Creek Wilderness areas near Mt. Rogers and beautiful Grayson Highlands.

Although one of the nation's smallest and only accessible by paddle, the Allegheny Islands Wilderness (PA) has to be my favorite because of the memories they evoke. For years, my family reunions would consist of all us cousins getting on the water in early morning and paddling down the Allegheny River, typically stopping at one of the islands for lunch. Beavers, otters, bald eagles, kingfishers, and mature old growth forrest were and still are all fairly common sights.

I'd also agree with Sean Van Cleve, with the nod to Dolly Sods (WV).

Got to give some love to my home state. Isle Royal, in Lake Superior is a great destination. Get there by seaplane, ferry or sea kayak. Wolves and moose coexist in dynamic tension.  More than 100 lakes on the island, filled with northern pike, trout, walleye, and perch.  Great backpacking opportunities. http://www.nps.gov/isro/index.htm

Thats really interesting Bill "L.Dog" about Isle Royal. 100 lakes wow and its not very long/wide. I almost went there in 1977 when I hitchhiked 10,000 miles around the USA when I was 21. Have not been back through the area since. I need to get back east again and see many of the places I have missed since living mainly in the west.

More Topics
This forum: Older: Hiking Poles/Trekking Poles ... anyone try them and NOT continue to use them? Newer: Sharing Pack Loads
All forums: Older: what is the advantage of a quilt over a mummy bag Newer: Quality of review - feedback requested