Old but interesting article – most remote spot in lower 48

A post in the Favorite Wilderness thread from kmatjhwy mentioned an area that was the farthest from a road in the lower 48 .

A quick search turned up this article from Backpacker.com and I thought it was an interesting read.

The thought of finding the most remote spot (in the lower 48) is quite alluring to me.

I love threads like that because I will often try to find out more about the various areas that are mentioned and I like to learn of such things. I’m guessing others may find this interesting.

Interesting. But what defines a road...a logging road? A forest service road? An old hunting road? I think his lament about distance from a road implies more than it is....a road any road does not mean an oft traveled road. As a result his cred went a bit down with me as he seemed to fuel an agenda more than set up the truth of the situation. But I guess when you call a horse trail, admittedly well traveled, a thorofare, anything you view as a road is a 6 laner to him.

Thanks for posting the excellent article. I have worked with all of the issues described in the article and packed horses into the Thorofare. Anyone that has worked with the Wilderness Act will recognize the accepted ways to evaluate remoteness and wilderness quality. Roads provide access. It changes everything. A road can be described as any conduit that allows vehicle travel, say a 4wd truck. The frequency of use is not the issue, it is vehicle access.

A network of logging roads in a National Forest as an example, will greatly impact the use and distribution of an elk herd. These kinds of issues have been studied for a long time and well documented. Elk use is greatly diminished by the construction of logging roads in a roadless area. That is why the Forest Service RARE II studies of roadless areas proposed for logging were so controversial. The same can be said for use by grizzly bears and several other "keystone" or "indicator" species.

Lots of areas in the West, locked up as Wilderness Study Areas (WSAs) for years have finally been voted on and many have become designated by Congress as wilderness areas. Nevada is an example of a state with lots of remote but not well known country that recently has acquired a lot of designated wilderness. When that happens, the Forest Service and the BLM close any roads within the wilderness boundary. They usually remove any evidence of man including old cabins. Don't believe the mantra of some environmentalists of the "last great places." There are more new ones all the time.

Besides NW Wyo, the Sawtooth area of Idaho,  many places in Montana, and the north Cascades provide ample opportunities for solitude where the activities of man are unnoticeable. For people from the East, it is a revelation to hike where there are no signs, few trails and no other people. I am still in awe after growing up on the East Coast and moving to the West in 1972.

Thanks for sharing that Patman.  That is a good article and I remember reading that some time ago.  I have been to Yellowstone many times and enjoy going every time, however, I like the border areas just outside Yellowstone just as much.  There is some beautiful wilderness country just north of Yellowstone in the Paradise Valley area.  I haven't been back in there in about 2 years but always yearn to go back.  Finding complete solitude and untouched lands in some of those areas isn't hard.  May not be the most "remote" area as the author of the article defines it but it sure can feel like it if you throw your backpack on and hike a few miles.

Great article. Thanks for sharing.

"..Don't believe the mantra of some environmentalists of the "last great places." There are more new ones all the time..."

Actually all it takes is a pro-exploitation administration and a Secretary of Interior the likes of James Watt to cut down, graze, and mine into oblivion what remains of the "unspoiled" tracks.  Also the phrase "There are more new ones all the time" is misleading.  No, we do no have more wilderness all the time.  That statement rests on the legal status of a parcel, not its actual ecological status.  What we currently have are more tracks of land officially declared wilderness.  Acts of Congress do not magically revert lands into instant, unsullied, wilderness; they had to be ecological wilderness or in a near state to earn that congressional distinction. And regardless of official distinction, the acreage fit to meet the ecological criteria is diminishing.

Now as for the Thorofare in the headwaters of the Yellowstone River, it is indeed the farthest point from a road in this modern day in the lower 48 states. This has even been verified by the Nat'l Geographic Association. Here in the Thorofare and the Greater Southern Absarokas is a roadless complex having more then 2,000,000 acres all together as wilderness. It is pretty much made up of the Teton Wilderness Area, the Washakie Wilderness Area, the SE section of Yellowstone Nat'l Park, and adjacent nearby roadless country.

Now I personally have been going into this area for over 30 years and love it! It is just marvelous with this area being practically unchanged since the days of the Mountain Men and Indians and with still being so intact. Actually there were a few wolves still surviving back in here before the reintroduction of the Wolves into Yellowstone Park. But this would be another story. Now even though I have been going back in this area for over 30 years, there are still back nooks and crannies that I have not seen. It is quite some area and the summers are always too short in my opinion. And this Upper Yellowstone River Drainage, after all this times is still soooo wonderfully pristine. In the Wilderness System, in how few of places it is a mountain valley that has been preserved. Back in here the Grizzlies are still here and quite abundant I might add, the Wolves howl, the Eagles still fly, the Elk can cover some mountain meadow, and one has ample room to wander. And in the Nat'l Forests back in here, one does Not need some permit to hike or horseback ride.

Again for those that are interested, I have a photosite that has many photos of this country. One is free to wander over and take a look at the photosite. The url is:

Wishing Everyone the Best!

I liked this article. its really sad that we can only get a few miles from roads in the lower 48 states. it makes me wonder how so many people get lost when all they have to do is walk for a few miles in one direction to get to a road.

For people from the East, it is a revelation to hike where there are no signs, few trails and no other people. I am still in awe after growing up on the East Coast and moving to the West in 1972.

I'd have to agree with this statement. Growing up in the east (and it was a fairly remote part of the east), I didn't even realize I was accustomed to hearing the distant sound of vehicle traffic while hiking. Then I did some traveling and hiked elsewhere - Montana, Oregon, Washington, BC, California, New Zealand. Now that I'm back east, I can't help but notice all the road noise. I long to find more trails in the east where I can't hear 18-wheelers from a distance.

Although, I guess knowing a road is close can provide a greater chance of rescue if an emergency does arise.

Thanks for posting the article.

I have found the bane of civilization in otherwise pristine wilderness is aircraft over flights. Much of the Sierra and California desert lay under commercial flight corridors, or are subject to military and private small craft incursions.  Usually over flights are not so intrusive; more of a psychological annoyance.  But sometimes fighter jets and other small craft buzz by low and LOUD, and can be very annoying.  During the post 911/Bush era, military operations originating out of the base near Twentynine Palms resulted in squadrons of helicopters and other aircraft over flying Joshua Tree NP at all hours of the day.  This in addition to the fact Josh is directly under one of the nation's main commercial east/west flyways.

Ed I know what you mean. the first few fighter jets are really cool and then after that its just annoying

Thoreau was no fool to seek solitude in nature. Great read! Thanks for posting.

On this topic, there's an ecologist couple trying to raise awareness of the concept of "remote" by traveling to the most remote spot in each state:

I started backpacking in the 1960s before the Wilderness Act was passed and used to hike in lots of remote areas, but there was no designated wilderness in those days. There were a few "primitive areas" like the infamous Pecos in NM. Now every state in the West now has wilderness areas and many road networks have been removed.

Working for the mines in Nevada required a lot of field time out in places most people have never heard of. We have the Top Gun jet fighter training school out of Fallon NAS. We have plenty of jets, Apache helicopters, and Stealth bombers among other things. I decided a long time ago that they are part of the landscape and I look forward to their appearance and awesome flying. Last winter on the Colorado River above Yuma a Navy Blue Angel jet flew right over our campfire and we waved to the pilot. He rocked his wings and it was very exciting. The A-10 pilots are low and slow and always wave back. Working in the middle of nowhere it is very comforting to see other humans once in awhile even if they are in the air. Attitude is everything in the outdoors. Don't let the presence of airplanes negatively impact your experience. 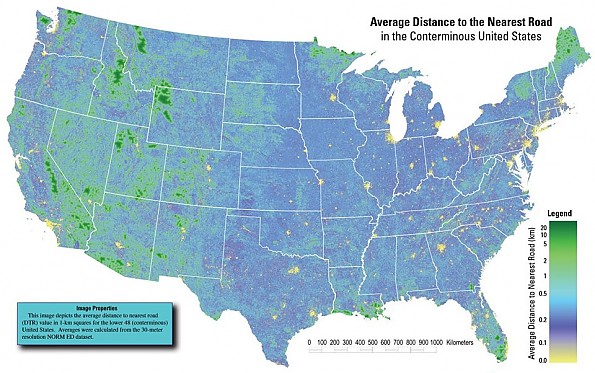 Here's a map I came across that shows the average distance to a road in the lower 48. The key may be hard to read, so allow me to mention that the darkest green areas are 30 km on average from the nearest road, carolina blue is between 0.3 and 0.5 km, purple is approx. 0.15 km, and the pale yellow spots are on average 0 km from the nearest road. Averages were calculated from the 30-meter resolution NORM ED dataset.

Thanks for the interesting map. I like the green parts in northern Maine, northern MN, south FLA, and southern LA.

Some places on the map like Nevada are not that far from roads, but nobody uses the roads. Some state highways are dirt. The "backroads" like the numbered main highway from Austin to Elko has about 4 cars per day.

The linked article is incorrect. The remotest spot is actually just outside Yellowstone in the Teton Wilderness at Bridger Lake.

If KK says it is true, I believe him. Wyoming is not for everyone.