Fisherman and their impacts

Our last trip took us to the upper reaches of the East Carson River,  Golden Creek, and Murray Creek.  It's an area that is completely closed to fishing year round.  That watershed is now a preserve for the rare Lahontan Cutthroat Trout. 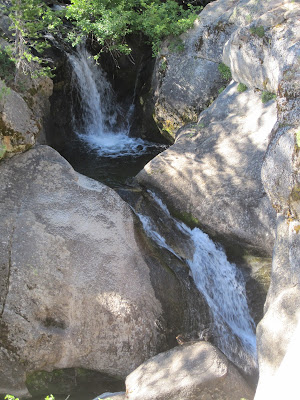 And guess what?  There were no people there.  No trash.  The trails were not well maintained…but there also weren’t a million use trails around every lake and stream, either.

It was beautiful water, by the way.

This area was not particularly remote, but there was simply less evidence of humans, and more wildlife, than we have seen anywhere else.  Coincidence?  Maybe not.

Just saying.   I love fishing in the mountains, and have done it for more than fifty years.  But I am glad places like this exist.

Those are some of my favorite types of places to backpack into, places with little to no use, no trash, no crowds.

I used to backpack into river canyons and leave the trail at some point and hike upstream as far as I could before sundown to find a nice secluded spot to fish for Rainbows & Browns.

It's a real shame to see how much garbage humans can leave behind over a few years in popular easy to reach fishing spots.

Nice sentiment, and nice sediment. I spend time in the same country. The use patterns are very predictable and easy to avoid. Fishing (and hunting) often take people to places they otherwise might never go.

LCTs are dong well in Pyramid Lake, especially the Pilot Peak strain which is believed to have the same genetics as the fish original to the Lake before European contact. The lake record is around 41 pounds. Recently many 25 pound trout have come out of Pyramid and 30 pounders are expected to be caught soon. Last year LCTs were trying to spawn in the lower Truckee River. The Paiute Tribe controls the flow from Stampede Reservoir for fish habitat protection including the LCTs and the cui-cui.

LCTs have been re-introduced to the Truckee River and many other places. Their populations are recovering. I don't think of them as rare, and that word has certain implications under the Endangered Species Act.

Rather than discuss fishing in remote places and describing the trash we have been able to find, let's remember for a lifetime all of the magnificent clean water charged with oxygen that makes such great trout habitat. I love being around the water including lakes and streams. Sat we are heading out for a 78 mile canoe trip on the Willamette River in Oregon. Good small mouth bass fishing at this time of year.

I hope you have a great & safe trip ppine!

Thanks for the info on the LCT.

The trash I have found has been mostly in easy access areas with parking nearby, I seek the remote areas because I love pristine places and the walk is well worth the enjoyment I get from being a guest near such beautiful high gradient streams.

My state of South Carolina has a population of brook trout that are on the southernmost edge of their habitat, these trout are very sensitive to change as well as overfishing.  The brookies are catch and release only in my state, but I just prefer to enjoy the beautiful streams and mountainous woods they live in rather than try to catch any.

We have plenty of stocked trout and I prefer those for fishing / eating.

One of our friends is an engineer, and he often talks about data points….when you get enough points on the chart, you can start seeing a pattern, and then you can come to some conclusions.  They might be incorrect, but at least they are supported by the data. 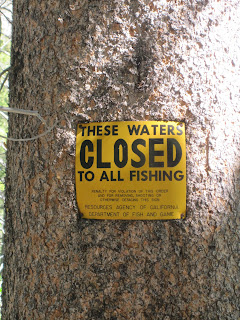 So on our last trip we camped at Leopold Lake in the Emigrant Wilderness, and we were completely alone.  Every other lake in the area had some campers, and some had what were described as crowds.  But lonely Leopold was quiet—just us three chickens.  It was lovely.

Of course, Leopold doesn’t have any fish to catch…and once again we found that where there is no fishing, there are far fewer people.

Want to get away from it all?  Then go someplace where the fish are not jumping.  Or if they are, they’re illegal to catch.

I rarely see fishermen because they tend to hike in creeks and I'm camped on the banks etc.  But sometimes I do see them and go to their camps after they leave and this is what I occasionally find---

A large wad of clear plastic tied to a tree and left as trash.

Here is their firepit after they left.  A wonderful heap of personal disorder issues.

If the subject is the impact of fishermen I would mention Trout Unlimited which has improved fish habitat nationwide for a long time. Fisheries and habitat are supported by money from fishing liscenses.

We have a local fly fishing club. There is a branch of the club that takes people with cancer and other health issues fishing as a way to focus on something positive in their lives. We have made a difference in the lives of many people and they are very emotive about it.

If the subject is the impact of fishermen I would mention Trout Unlimited which has improved fish habitat nationwide for a long time. Fisheries and habitat are supported by money from fishing liscenses.

We have a local fly fishing club. There is a branch of the club that takes people with cancer and other health issues fishing as a way to focus on something positive in their lives. We have made a difference in the lives of many people and they are very emotive about it.

I am a member of TU and you are correct about the work they do ppine, also about the financing of work done to improve habitat - and educate fishermen.

I think there are clearly people who fish who are also educated stewards of the environment, I think this is the majority. There are also a minority who don't think twice about leaving trash behind, breaking fishing regulations, or just being a general nuisance.

Years ago I attended a TU sponsored event where you got a 30 minute streamside entomology lesson, and got to go fly fishing - one on one - with an experienced fisherman for about 3 hours, all for free.

It was great and I will always remember it because it was such a big help in getting me started fishing for trout.

And yes, of course there are all kinds of fishermen!

Just as there are all types of hunters, hikers, backpackers, canoeists, and horse packers. I was backpacking last week and had to carry home a bunch of metal from the old campfire ring which had been there a long time. Backpackers probably as a group, have better ethics than most when it comes to the outdoors. They probably also have the most bias against the other groups though.