Finding Water in the Mountains

The Sierras have been dry the last three years. Recent July rains have helped the vegetation, but the streams and springs are drying up. On a day hike near Ebbett's Pass we had planned to get water from a major creek that is shown as a permanent stream on the USGS quad.

I usually carry a liter bottle of water, and often bring along a pump filter for nice cold mountain water. We got to the three forks of the major watershed and could see evidence of recent flow, but no water. My long time hiking companion and I brought our three large dogs.  They routinely found water before we could. They were very helpful in locating water in dense willow stands, and in the major drainages. I found some wet mud with a lot of riparian vegetation and was about to start digging, when I heard lapping about 30 yards away around the corner. There was a trickle of surface water less than an inch deep. By digging out a trough and letting it clear, we had clean water that was about 45-50 degrees. It was delightful. Watching all of those survival shows has heightened my sense of where to find water, using the riparian veg as the main clues about where to look. The utility of having field experienced dogs around became very obvious. Something to think about this fall when it is going to get really dry.

Hunting in central Nevada in the fall I have often found  snow to put in my water bottles and left them out in the sun to melt. There is often little water around except in deep dark drainages that are a long way away.

Huh, that’s a neat thought about dogs finding water for you. I’m not a dog owner and have never intentionally hiked with one (though I’ve had “stray” hunting dogs follow me for miles). In the southern apps finding water is generally not a concern and when hiking places I know well of course I never need to carry much from camp to camp.

That is one of the advantages of spending quality time in an area and getting to know it well. I’ve really admired that about the way ole Tipi will really explore an area and find all the water flows. That knowledge can reduce the stress of trip planning for sure.

I also watch all the survival shows (about the only thing I can stand on syndicated television these days) and I agree, it does make you think about such things.

Thanks for the thoughts. The western mountains have dependable flows of water during most of the summer months. The fall into October can be more challenging. After 3 years of drought the situation changes into what we are dealing with now. There is still water around, but outside of lakes, only some small fraction of the creeks and springs normally flowing have water in them. Being caught in a dry camp is awkward, and so is carrying 5 liters of water around. It is worthwhile to give some thought to how to find water.

You make me begin to wonder what my water sources along the east side of the Sierra Nevada will be like on my cycle journey this fall. I use a filter but other than stores for water and lakes are there many streams flowing east out of the Sierra? 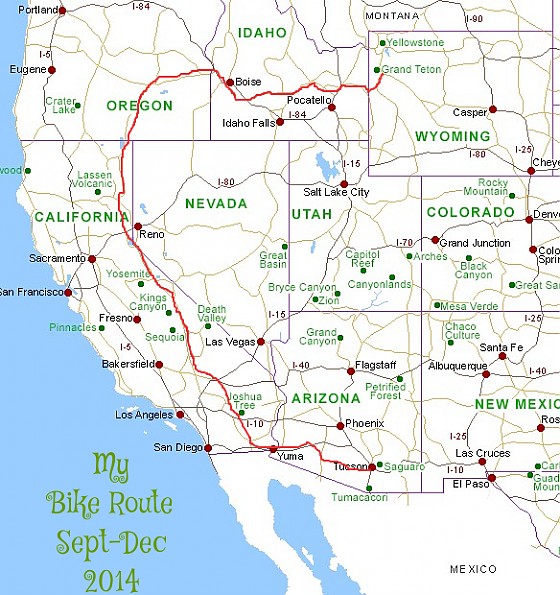 I plan to enter California at Goose Lake and pedal south down 395. Is Mono Lake potable after filtering or is the mineral content too strong?

On this trip I plan to have my Camelbak 3 liter bladder on my back and 6 other one liter bottles to have for emergencies. Two will be on my bike the other four in pockets in my rear panniers. The Camelbak and bike frame bottles will be filled daily.

After doing my last 30 years of tours up and down east and west Utah, I wanted to do a different route to get back to southern Arizona, I just hope my natural water source are abundant enough.

I used to take my dog backpacking all the time and he could almost always hear (or smell?) water before I noticed any. Sometimes he would wander off for a minute and come back with wet paws or water dripping from his mouth.

I don't doubt it at all ppine.

Mono Lake is definitely not potable water. It is the worst water I can think of.

There are streams that flow out of the eastern Sierra but by the fall of this year they are going to be pretty small. Most of the creeks will be dry. The rivers you will be able to walk across easily. With a bike you have the capability to carry lots of water and along US 395 there are plenty of towns to get water.

You can probably drink out of Goose Lake but it is not going to be the best water you have ever tasted. If you are on paved roads you will have no problems.

Mono Lake is definitely not potable water. It is the worst water I can think of.

There are streams that flow out of the eastern Sierra but by the fall of this year they are going to be pretty small. Most of the creeks will be dry. The rivers you will be able to walk across easily. With a bike you have the capability to carry lots of water and along US 395 there are plenty of towns to get water.

You can probably drink out of Goose Lake but it is not going to be the best water you have ever tasted. If you are on paved roads you will have no problems.

I just returned from a week above Bishop on the eastern Sierra.  I agree with ppine: don't even attempt to filter Mono Lake water, it will only foul your kit.

As for the creek flows: Most of the major streams draining from the Sierra out into the lowlands east of the Sierra are regulated by the Dept of Water and Power (DWP).  The DWP is mandated to permit a nominal level of flow in these streams, regardless of precipitation.  Thus most any stream draining from a major basin will have water.  You would never know we are in the midst of a severe drought, judging from the flows of Lone Pine Creek and Bishop Creek as they passed through town.

Thanks for the info whomeworry. Wasn't that what Alfred E Newman the so called editor of MAD magazine said Who Me Worry?

I came down from Seattle this week. Goose Lake is dry. So are many of the other large playa lakes shown on the map.

How about the side streams out of the eastern Sierra? Of course I can get water from all the towns and small stores along the way. I plan to carry about 6-9 liters as needed between long stretches of highway. My new panniers/saddle bags are capable of carrying 2 liters each, plus 2 on my bike and a 3 liter Camelbak on my back.

The discharge is puny in all of the rivers and creeks and they will continue to decline into fall. You will be in good shape on a bike with all of that carrying capacity and the daily range of travel. Honey Lake is dry, so is Abert Lake.

Is the whole area very dry and brown in October which is about the time i will be passing down the side of the Sierra's?  What is weather like that time of year?

I am now reconsidering my route plan. Looking at going south from Twin Falls Idaho down the Great Basin Highway through Nevada to southern California.

I am glad you asked. As mentioned above we have had an unusual amount of rain this summer including last week. I just drove down US 395 from southern OR and the country is green from the rain, but the streams are low due to the 3 year drought. October is the best month of the year in the eastern Sierra. The aspens and cottonwoods turn yellow, it is sunny during the day with little wind, and cool at night sometimes below freezing by late Sept. It is the perfect time to travel on 395.

Well, I have 25 more days to consider my route. I am not sure as I have never been west of Wyoming through south to west central Idaho and into east central Oregon. Will have to consider it or the Great Basin. I want to get to southern California's Salton Sea and the Slab City area to visit a long time friend who winters there and will be there in late October.

You will find that the weather further west is relatively balmy and pleasant compared to Wyo in the fall, surprisingly so. Eastern OR is remote country. You will like the route.

Well I do think I may head south from Twin Falls instead of going all the way west to Oregon. I will simply be glad to be on the road again after bing back in Jackson Hole 6 months now. Tired of the same old surroundings. 3 months is long enough for me here.

Three years ago we took the Battle Mountain (I-80), NV to Austin (wife's great grandfather had something to do with the history there in 1860's), then to Fallon, Yearington and 338 over the pass to CA that ends at Bridgeport.  Plenty of water stops from Yearington to Bridgeport.  Austin is out in the sticks but historic.

US-395 South might be better than anything south of US-50 except perhaps via Tonopah - which is worth time spent soaking up mining history - then the 6 west.

Salton Sea probably is best attacked from the northwest and not from north or east.

You'd like Venice Beach on a Sunday morning.   The place where many of the loose nuts and bolts from the creation gathered up.

Route 50 across Nevada (the loneliest road in America) is a grand road trip especially in the fall. It goes from Great Basin NP thru Ely, Eureka, Austin, Fallon and into Reno.

My girl is a musician and plays western music and performs cowboy poetry on stage. I changed some of the lyrics to "Sweet Baby James" which is one of her songs:

The road I am taking is called the Great Basin Highway. Have always wanted to travel through the great basin.  Most roads in the US especially in the west where I have lived the last 40 years are lonely on a bike going 15 miles an hour. To me its kinda like being on a hike instead I am cycling and rolling instead of walking. I am really looking forward to being out on the road when I can get going. I plan to leave around September 15th now.