Maverick of the Grand Canyon

I once knew,worked with and hiked with a 80+ year old man in the Grand Canyon who in his 80th year hiked 104 rim to rims across the canyon. I hiked with him on his first R2R in early 1999. In this narrative he talks about the Grand Canyon. Sadly he died in early 2009." I miss you my good Friend and hiking companion!" His name was Maverick a name he gave himself.

His average speed was 1 mile an hour. On our first R2R it took him 19 hours to cross the 23 miles from the North to South Rims. I took 7 hours as he told me to hike at my own pace and not wait up for him.

This video shows him talking about the Grand Canyon http://arrowheadfilms.com/docume…/voices-of-the-grand-canyon

Back in the 1970s I was amazed at all the senior citizens backpacking in the Sierras. They had light packs and usually wore high top chuck taylor basketball shoes. They re great role models, and I am slowly turning into one of those guys. Backpacking is so familiar. I am much slower than a few decades ago, but probably more skilled. It gives me a reason to stay in aerobic shape.

The Canyon is a special place. I have been over it in a small plane, floated the river, and done lots of day hikes, but never a R2R. Laurent made it obvious that it is not too late.

You meet some interesting characters Gary.

I have hike some up there and the terrain always amazes and sometimes terrifies me.

A great book on the subject is Grand Obsession, a fine piece of writing about Harvey Buchart.

I had not seen that video until now - thanks.

Ghostdog said:A great book on the subject is Grand Obsession, a fine piece of writing about Harvey Buchart.

In 1983 during my first three backpacking trips in the GC in October, I met 2 senior couples at Clear Creek. The youngest of the four was 73 and the oldest was believe it or not, 96! I remember it well, cause the 96 yr old was a woman and I told her at the time my grandmother was 96 as well, but in a nursing home. The woman replied that most of her friends were in nursing homes. She had grown up on a ranch and hard work was all she knew. When she had retired she decided not to go living in some place being taken care of the rest of her life.

Clear Creek I might ad is  quite a ways into the back country of the GC. Its 12 miles east along the north side of the canyons inner gorge and another 9 miles from the south rim.

The other 3 seniors were the same way, all in good shape for people their age and were backpacking a week in the canyon.

I first met Maverick when we worked together at one of the lodges on the south rim. We were both cooks at the Maswik Cafeteria. He was in his late 70s then in around 1997. He later started selling Golite at the GC Village store and gave me my first Golite Shangri-la 3 tent. Later he also worked as a volunteer at Indian Gardens Camp below the south rim on the Bright Angel Trail.

On his time off he would day hike early in the morning to either the 1 1/2 mile or 3 mile rest house which are water and rest stations along the BA trail. The first is almost 1000 feet down the trail from the rim and the other is 2000 feet below. He would hike down to one or the other almost everyday. See this map link to see Grand Canyon Village and the BA trail leading into the canyon and the two rest house's :http://www.mappingsupport.com/p/gmap4.php?ll=36.061383,-112.140025&z=15&t=t4

In the spring of 1999 he invited me to go with him to drive a car to the north rim that belonged to a friend who worked at Phantom Ranch and had stored the car at his house on the south rim. Then we did what was to be both our first R2Rs across the canyon. We left at 4 am from the north rim on the North Kaibab trail and hiked together to Cottonwood Camp. There he told me not to wait for him at his 1 mile and hours pace and to go to the other side and wait for him at his house. I arrived at the south rim at just before noon. He arrived at 11 pm.

After that we did a long distance hike starting down the South Bass Trail in the west and coming out the S.Kaibab Trail. We were in the canyon six nights and he reported our position at camp each night with a satellite phone to his wife on the south rim where they both lived and worked.

Maverick lived and worked and hiked the canyon from about 1997 when he was in his late 70s to 2009 when he died there. He did numerous day and overnight hikes in the canyon, was a volunteer ranger, and worked other various places on both the south,north rims and in the inner canyon. 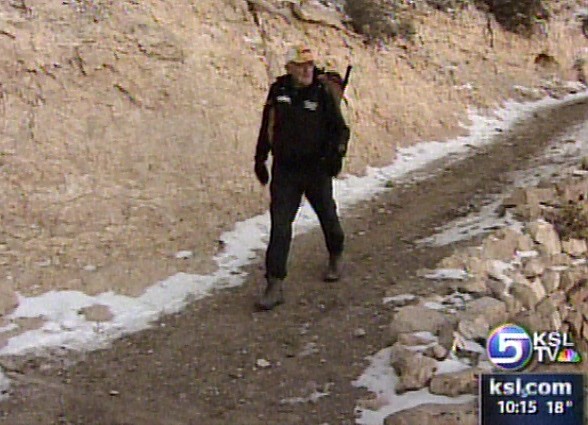 Maverick during one of his inner canyon treks. Thats ice and snow on the sides.