So I was recently talking to a friend of mine about my latest hiking trip and telling him how my new hammock worked out for me and he told me something that took me aback. He said he heard on the radio that some state and national parks were banning the use of hammocks because they were supposedly damaging trees. I have never heard this and was wondering if anyone else knows anything about this.

I can see hammocks damaging trees if someone uses to small of a tree or just cordage to hang their hammock. But with the right size tree and the right straps (like the ones that came with my Hennessy) there is no damage to the trees.

But, yes, some parks indeed are restricting or outright banning the use of hammocks. I have seen trees in high use areas that were in fact damaged by tying ropes around the trees multiple times.

In areas of heavy use (like official campgrounds), damage to trees is common and readily visible. The worst is due to people putting nails (and, believe it or not, spikes) into trees to hang clothes, cook pots, etc on the trees. In areas where there is a lot of climbing, some climbers (usually inexperienced) tie their belay and rappel anchors to the trees, apparently never having learned or been taught about the tensionless wrap. And, yes, anchoring your hammock or tent (or clothesline) incorrectly can and does damage the trees.

The damage from tying rope or cord to a tree is due to the fact that the tree's circulation system (water and nutrients) lies just under the bark. In essence, if you attach a cord or rope incorrectly, you are choking the tree (think about a tight necktie, bandana, shirt collar, etc tightened around YOUR neck).

The key is to spread the load. Many hammock makers do include directions about spreading the load and protecting the tree. But some people just use a small diameter rope. YOU HAVE TO PAD THE TREE!!! I cannot emphasize this too much. Using 1 inch tubular webbing, or even 3 inch webbing is insufficient. You can reduce the pressure by wrapping webbing to provide a 5 inch or more width. If you are wrapping a rope, the rule of thumb for tensionless wraps is 4 or more turns around the tree. Here is one of many sets of instructions on the web.

I have several hammocks myself. Most of the hammocks I have seen in use have attachment webbing or rope that is inadequate without making multiple wraps around the tree (the Hennessy is better than most, but in my not so humble opinion requires at least a double wrap). Also, choose trees that are sufficiently large diameter. Many of the tree hangs I see in park campgrounds are too small diameter (OK, I know, most of the yahoos car camping in official campgrounds don't know the basics and don't care in any case).

I was recently treated to a SOBO thru holding court one evening at the Guyot camp site. He was informing his enraptured listeners that hammocks are so much better than tents because they don't damage the environment like those evil tents. It was more than I could take without objection so I pointed out that LNT is about how you choose to use your gear and hammocks were no more immune to being misused than any other shelter.

This wasn't much of an issue when there were relatively few hangers out there, but as it has become trendy not only have the numbers gone up but the average experience level has fallen. As with anything, those who don't know what they are doing are the ones most likely to do damage. It would be great if hangers spent more time convincing converts to be responsible and less time on making new converts.

As a long time ground dweller, I agree that this sounds like lack of care for LNT principles which can occur with a tent or hammock. I have no hanging experience, but have seen many a site destroyed by uncaring tenters. I would think that the type of tree and bark would also be a factor would it not? I could certainly see choosing a site with really hardy species versus others with softer bark should be a standard practice along with the type of strap used. I have a habit, which started after we didn't have to pay to develop photos anymore, of taking a pre and post camp photo. If I can tell the difference between them, I work on improving my LNT approach before the next trip. I doubt tree damage would show up on a photo though...

LS, a SOBO thru holding court at Guyot? Wow, that was a quick jump to expert huh? Only 357 miles in. lol

I love the photo comparison idea....might try that myself.

I heard the same or similar radio broadcast.

I don't know, but I would think that picking trees with really thick bark (the outer dead layer) like Loblolly Pine would cushion the inner bark and sapwood from constriction.

Thanks Bill S for the web link on Tensionless Wraps!

There are frequent "discussions" on hammock forums about tree damage. Many well educated "experts" weigh in on exactly what happens to trees used to support loads from straps or cordage. Studies are referenced and quoted, in the end all we really have are roughly accepted best practices. I test and enjoy hammocks and tarps on the exact same trees that I actually own and have done so for around 3 years. My pines show no sign of harm, I try to find hardwoods on the trail, smallish ones at that with fewer large branches to interrupt my slumber.

I'll refrain on discussion of the cambia and the myriad of effects of vines, cordage and other debris can have on our oxygen producing assets. But I will say that trees are durable things, resourceful things, and adaptable things. I grew up walking the farmlands of SE VA, trees were quite useful for fencing and grew around many of wire and fencing materials.

Please note, I am no expert, know the risk whent you grow things in trees, and hang trust them with your life. Rumors are that trees consume hammockers who use incorrect straps and cordage, but I couldn't find evidence of that either. 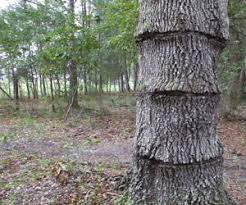 Cool pictures dirtwheels. Here is one I saw last week in a creek bed. 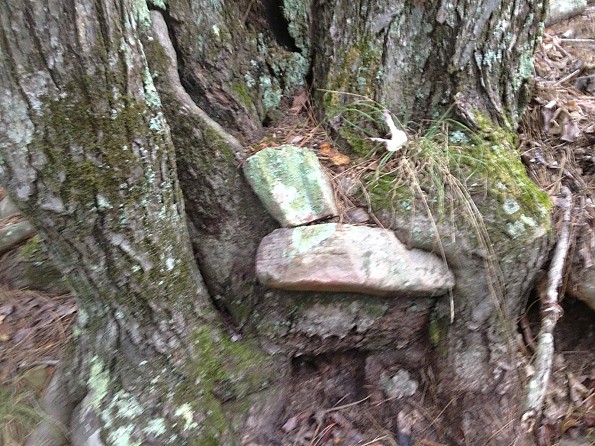 I am not sure why you have "never heard of this".

As far as tree damage I think common sense goes a long ways. When I hung my hammock I followed the double wrap procedure recommended on Hennessy's website, and with one exception, saw no obvious visible evidence of straps ever being there. Could there be internal damage? Possibly.  Enough to truly harm the tree? Doubtful. But if this was done repeatedly, or with the wrong material, or on the wrong type/size of tree Im sure that would change.

But then again I remember back on the farm when my family used trees for all kinds of insane activities relating to farm work like tractor repairs, engine hoists, frame anchors, etc... , the trees never died and just kept on going. Maybe with a few scars or a few less branches though.

Nice pic, trees are quite resilient the stuff you can find grown over or around in them are amazing.

Cool pictures dirtwheels. Here is one I saw last week in a creek bed.

More Topics
This forum: Older: Would you stuff your arm down a grizzly's throat? Newer: Borah Bivy
All forums: Older: Has Anybody Dehydrated This? (Other Breakfast Ideas Too) Newer: Two Early Summer Baxter Trips