Had a tragic experience this morning I thought I'd share as a cautionary tale. Hopefully others can learn from my mistake.

Woke to a heavy frost, 24°f or so, but finished loading my pack and got the gear on the bike. Annual fall night on the Bay of Fundy was the plan. With a four-hour ride ahead of me it took a long time to get suited up in all the various layers. Then I found out the bike had been sitting too long in the cold and didn't have the heart to turn over.

Don't wait. Get out there and enjoy fall before it's gone. Time and tide... 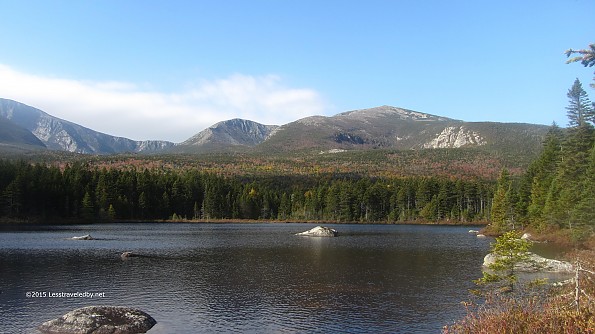 I just came back from a 3 day fishing trip. Fall is the best time of year in No NV and the eastern Sierra. Bald eagles, osprey, 45 Sandhill cranes, a flock of wild turkeys, and 15 antelope with lots of fall color. The fishing was crummy due to the drought and warm weather.

Next month I am planning a backpacking trip in the local mountains. There are no trails in the Pine Nuts and likely no water. I am waiting for the cooler weather. We will see no one on that trip.

Yep Fall will turn to Winter before you know it. I live in the Southeast so we have a ''longer Fall'' if that's how you want to look at it.

I used to ride a motorcycle back and forth to work in the mountains of Tennessee, during the winter you had to want to go to work really bad.......well, more like HAD TO really bad.

I used to live in Laramie, WY at 7,200. The university is there and it snows a lot. There were college kids that rode their mountain bikes to school even in blizzards when the temp was below zero. Sturdy kids.

We have had snow up here for over a month now. Summer is short; enjoy it while it lasts. One consolation is I love skiing and we have a good base now. 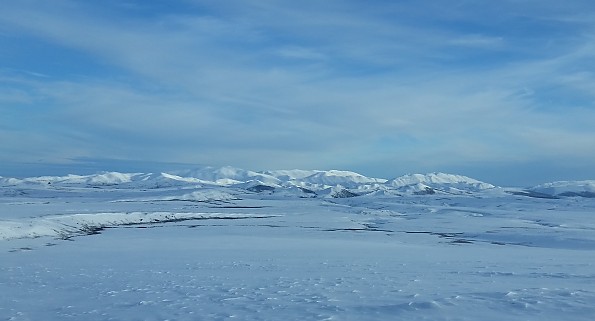 I went out skiing twice already; once with the dog and once solo. Good times.

I have always been a frustrated musher. We used to have some great dog sled races around here.  I tried to put together a winter trip with some pro mushers in No Idaho where we each have our own teams, but it never happened.

For winter trips we used to go on metal edged xc skis and have dogs pull some small sleds with harnesses.  Winter is the quiet and clean time of year.

The big outdoor party is today for Nevada Day and Halloween, with a wall tent, an 18 foot tipi, dutch ovens and a professional concert by Mike Beck.

The weather will be record setting warmth in the 70s. In two days it will be in the 40s with snow and lows in the teens. We are expecting a foot or more in the mountains. Come on El Nino.

Based on his photos, Walter looks a lot shorter than that...enjoy the warm weekend and then the snow.

2-3 feet of snow predicted the next three days for Lake Tahoe and Jackson Hole and 13 feet for Mt Rainier!

Had a tragic experience this morning I thought I'd share as a cautionary tale. Hopefully others can learn from my mistake.

...I found out the bike had been sitting too long in the cold and didn't have the heart to turn over.

I had a similar experience the other morning. I got up, put on my running clothes, stretched out, and then stepped out into 30-ish degree weather. My legs didn't have the heart to turn over in the cold, and I went back in for coffee. :P 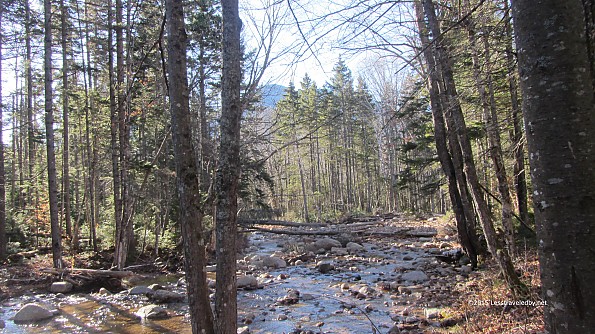 Hooked up the scoot to the charger and headed to NH for 2 nights. Trip report later, but short version: awesome!

Winter may be coming but that doesn't mean we have to go gentle into that good night.

Lake effect snow is coming off Tahoe this morning. This is our second snow storm of the year, with more coming next week. Thanks to the Ocean Gods for the upwelling off the Coast of Peru.

I am waiting for the inevitable thaw between storms to sneak up to the mountains behind the house for some niche backpacking in a place with no trails and few visitors.

We have had our second snow as well, first one dropped 22 inches on the Tetons but down in Jackson only a inch and it melted away. Now we just had a new snow fall last night of another inch 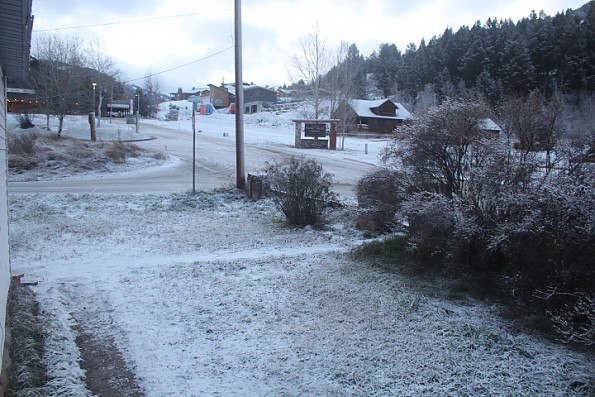 View out my door this morning when it was 21 degrees 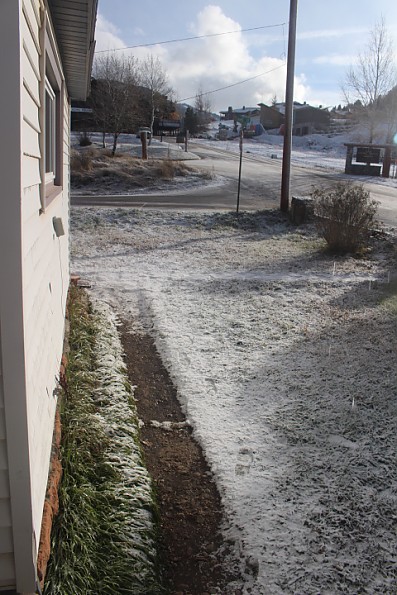 you are lucky to be living in the west.  lived in Colorado for many years, but now back in Ga.

what is the location???

Sounds like some battery maintenance is in your future! Hope you had a great time on your trip

Went skiing again last weekend. We currently have about 60cm of snow in the sparsely forested valleys with much less on the hills. The temperature has been around -15C to -20C; not bad for an afternoon ski in the dwindling light. Another month and the sun will set for about 8 weeks. 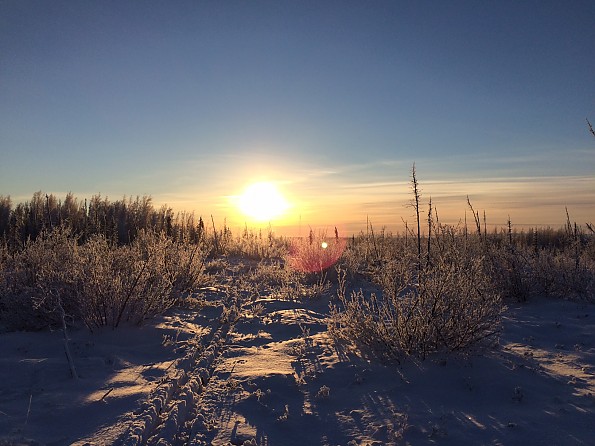 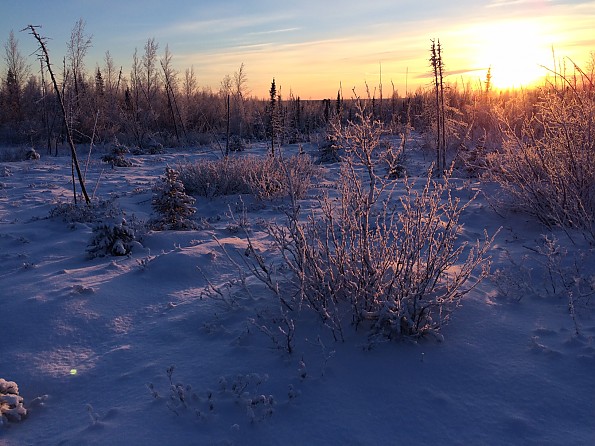 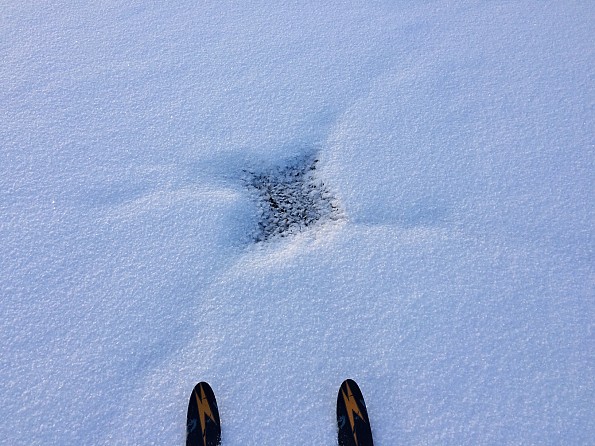 This is called a "snow spider" a formation made on lakes and rivers by water percolating through cracks in the ice. Even in the coldest winters overflow can form a deadly trap between the ice and snow. Watch for snow spiders. 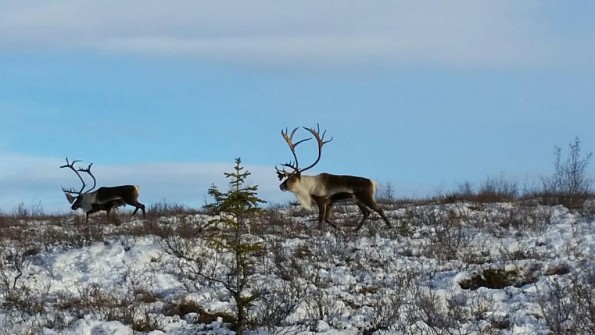 I saw these two guys on a hilltop. Kind of made my day.

Pemi SAR posted this pic of the Greenleaf Hut with Lafayette in the background today. You don't need a FaceySpace account to view the picture, just click the link