This movie in on again.  I watched it last night with my Border Collie, who was fascinated by the wolves.  I read several Farley Mowat books as a student in the 1970s. The film was made in 1983, and is a masterpiece. The humor was much more obvious now. I do not take things so seriously. Tremendous irony, window into Inuit culture, great cinematography, etc.  We have had wolf reintro since the movie. Check it out if get a chance.

I love that movie, saw it many years ago.

Farley Mowat, or as he is know in the north "Mr. Hardly Knowit",  is primarily a fiction writer. This is apparent with the glaring biological inaccuracies found in his books such as Never Cry Wolf. Mowat, who was not a lone biologist as suggested in his writings, assisted a team of biologists employed by the Canadian Wildlife Service and under the supervision of Alexander Banfield. In fact, Mowat wasn't a biologist at all.

"I hope that readers of Never Cry Wolf will realize that both stories have about the same factual content."

After only a few weeks or so Mowat quit.

He also was found guilty of plagiarizing much of the wolf behaviour from Adolph Murie’s The Wolves of Mount McKinley.

If you want facts on wolf behavior, and their predator/prey relationship with caribou, read the aforementioned Murie or David L Mech. If, on the other hand, you are looking for an adventure yarn, make some popcorn and watch Never Cry Wolf. As Mowat himself said,

"Never let the facts get in the way of a good story."

I saw the movie way back when it was in the theater. I really enjoyed it as well. 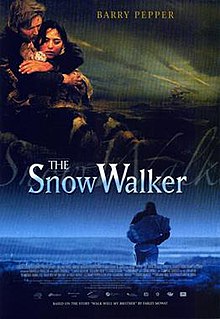 The Snow Walker is a 2003 Canadian survival drama film written and directed by Charles Martin Smith and starring Barry Pepper. Based on the short story Walk Well, My Brother by Farley Mowat, the film is about a Canadian bush pilot whose life is changed through an encounter with a young Inuit woman and their challenge to survive the harsh conditions of the Northwest Territories following an aircraft crash.

This is a great book. Thanks for mentioning it Gary. I noticed it on my bookshelf yesterday.

North's response is really interesting.  It is easy to see how movies misrepresent lots of things, and people get sensitive about what the public sees.  Most people think that Nevada is nothing but cactus and rocks. I hope they keep thinking that.

"Never let the facts get in the way of a good story."

Exactly, North. When I first read "Dangerous River" by RM Patterson I enjoyed the yarn. Patterson claimed to have shown Albert Faille the way above the falls. Later, I paddled the Dease, which Patterson described in "Trail to the Interior", and also paddled the Finlay, (a third or fourth descent) which Patterson described in "Finlay's River". After reading these books many years ago, I found him a  good writer, but also thought of him as a later day explorer. After descending Cottonwood Rapids on the Dease, I questioned Patterson's description of "rocks flashing past like destroyers". I only saw one or two. And his campsites...who in the world would camp on THAT marshy point. After I corresponded with and read David Finch's biography of Patterson, I learned that Faille showed Patterson the way above the falls of the Nahanni. Patterson was a very good adventure writer, but literary license was necessary to sell books and build a reputation.

Mowat could tell a good tale. "Grey Seas Under" is one of my favorites of his. His are works of fiction. Good reads and might inspire people to read more accurate, if less colorful, tomes.

I recently watch both Never Cry Wolf and the Snow Walker again.

I would much rather watch a movie about the bush, even if the facts are distorted than watch another movie about spies and drug lords shooting each other and crashing cars and airplanes.  Not to mention all of the other nonsense that people watch for entertainment.

I would like to see the movie "Attla" again about the famous musher.

Another good one is the classic Jeremiah Johnson with Robert Redford.