I bought this stove at a garage sale for $1 but I cannot figure out how it connects to canisters. Even the original canister. I bought a Coleman canister and does not fit. Am I missing something? 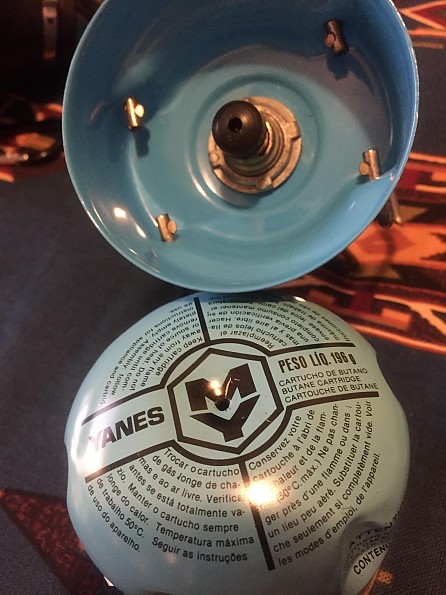 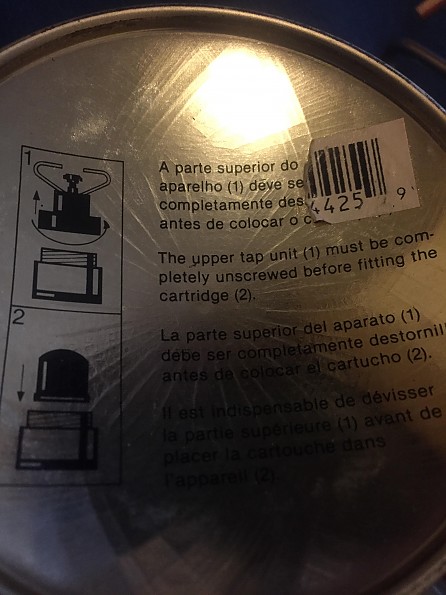 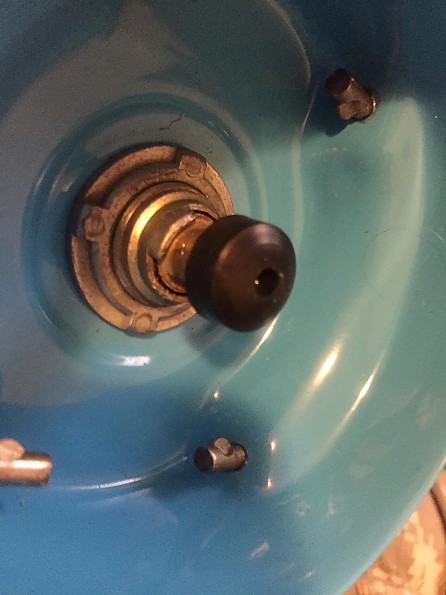 That stove must screw down to the canister making the hole it it. Thats a old style stove. I had one in the late 1970s. I dont know if there are canisters made for it anymore.

I actually found it they are called bleuet stoves

The Camping Gaz "Bleuet" stoves are a puncture-type attachment. They used to be very popular, until it was realized that they have a strong tendency to leak and potentially ignite. Camping Gaz was a French company that was taken over by Coleman, which is now part of Johnson Outdoors. They discontinued the canisters because of the risks. There used to be some SE Asian sources and a couple of Slovenian companies making them. But, again because of the risks, those cannot be imported to the US or Canada.

I have seen several accidents involving this type of stove, a couple actually exploding with shrapnel and several where someone detached a canister containing fuel and got frostbite from the expanding, extremely cold gas that sprayed onto his hands.

I suggest you just display it as an "ancient artifact". By law, disposing of the canisters in most of the US has to be done at an authorized "Hazardous Waste Disposal Site".

it's not easy to tell from your photos.

the blue color reminds me of old butane stoves.  the ones that used a 'piercable' cartridge had metal pieces that would swing down and lock the gas can to the burner, and a sharp point in the center of that rubber seal in your photo would punch into the canister.  take a look at the photo below. 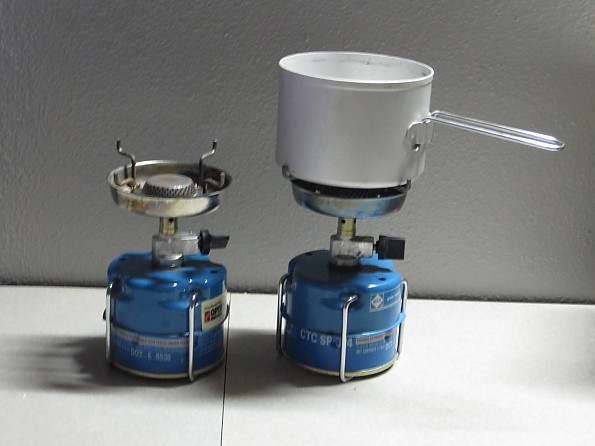 the company, or some evolution of it, is still around:  https://www.campingaz.com/p-26478-bleuet-206-plus.aspx  however, it's not clear that they still sell the piercable stoves any more.  also,  i'm not sure if you can still buy the smooth-top piercable cartridges in the US - i checked amazon, and they only sell them outside the US.  http://www.amazon.co.uk/Campingaz-C206-Pierceable-Cartridge-Pack/dp/B00MBNHXHM

The gas went out last month in LA and I needed a coffee badly.

So I took out my old Camping Gaz stove.  I bought the stove in about 1971 and had not used it since then.  The gas canister had never been removed.

It lit immediately.  No leak and no explosion.  took a minute or two to boil water and voila, I had my coffee.  And a big smile thinking about the last time I used the stove in the Serengeti in 1971.

So the next time the gas goes out on my stove, I will light my old dependable Camping Gaz stove once more.

I have a Camping Gaz lantern that I bought circa 1984; I actually used to bring this with me when backpacking, but haven't used it in years.  There is still a canister attached, I think, and I also have a full, un-pierced canister.    I think I'll take this out backpacking again sometime; the last time was on the A-T in Vermont in the year 2000.

As Bill S said this is an old Bluet style stove. Ditch it or archive it DO NOT ATTEMPT TO USE IT!

My last one caught fire while bivied on a ledge in Romsdal Norway, it was tossed off smartly and exploded a short distance below in mid air. I might add that the brew was completed with the ever reliable Svea 123 mini petroleum stove.

Hello Corey.. I have over 70 stoves and have  a few like this , but packed away?.. My memories are that these had two sprung clips that came over the outside of the top which held the gas cannister tight to itself.. then the burning top would be screwed down.(here is where the dangerous bit happened.). My advise? get rid and buy a modern option. Not worth the risk of rssurection and not a very collectable of valuaed item.. There are some damn good ligtweight mountain stoves out there.regards John

I had one of these when they first appeared.  Found out too late on a hike, the BUTANE does not work in cold weather!

I have three or four of this type of stove. Given that one can't remove the cartridge while there is any gas in it, and the tendency to leak, I don't use them any more. But - they have a huge sentimental value, so I keep then in the "gear closet."

Just catching up...had a Blurt but it's last functioning trip we had to launch it into the lake in the Boundary Waters. We fished it back out so hope the water quality didn't suffer...

https://youtu.be/Q0wGQ4ctkk4 In this video, see minute 5:30 to see the stove in use and how the parts go together.