How to Build an Igloo by Yourself 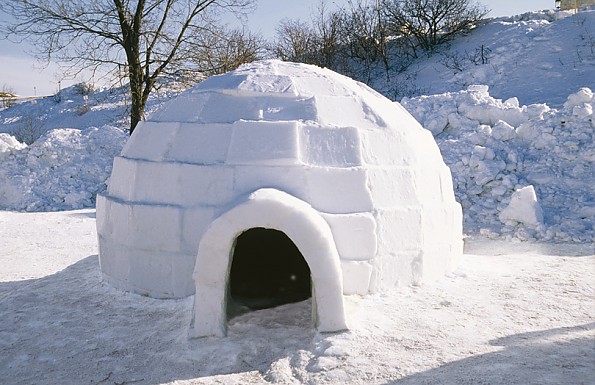 How many of you have built an Igloo? I used to make snow caves in drifts when I was a kid growing up in upstate New York and made a few Igloo's in Yosemite the winter of 19879-80 on top of El Capitain

I have built igloos, quinzhees, and snow caves in the Sierra, Alaska, and other snowy locations. They are a far better shelter than any tent or hammock for low temperatures and storms. Inside temperatures are typically around 32°F/0°C, though they can get down to 20°F or up to 35°, with no wind. They are very quiet inside - no flapping tent cloth.

Only problems are the time to build them (I can build a bolt cave for 2 in 15-20 min, but a quinzhee takes a couple hours and under perfect conditions an igloo can take 3-4 hours, depending on size), and you should not use a stove or fuel lantern in them (depletion of O2 and creation of CO).

There is a company that makes a tool for building igloos. It has a "box" on a pole that pivots around the selected center for the igloo. The box is used to compress the snow to form perfect blocks. The pivot pole allows the proper spacing and tapering of the shelter. Haven't looked at the video yet.

That box is called an " Ice Box "I build one for work every year. It is usually a 2 man operation . 1 to work the snow 1 to pack the box. After cutting out the floor with a snow saw you can make a bench and table to fit 12 people inside.

I learned as a kid in NY to make breathing holes and one I had on EL Cap I used my SVEA 123 inside. I started with one igloo and added two more rooms over a 3 month period. I used to host the climbers that scaled EL Cap. I had sleeping platforms above the colder floor air and my entrances were lower than the snow level outside to keep the colder air settled there.

I lived on the top of El Cap for 3 months from February to late April 1980 until it started getting so warm they started melting and collapsing.

The ones I built in my back yard were more like quinzhee's but just a hole dug into a snow drift with a blanket over the top covered in snow. I started building them almost as soon as I started playing outside in winter.

Hi Gary, thanks for the video link. However, that isn't quite how an igloo is built. A traditional igloo is built in a spiral, similar to how some people might peal an orange, not in concentric circles like in the video you presented. Also, the snow isn't right. The Inuit would use snow which was wind blown and hard packed. When you walk on it it would sound like Styrofoam.

This video from Canada's National Film Board depicts how a traditional igloo was built.

It is hard to find the right kind of snow for a proper igloo in most places. I have experimented with snow trenches and snow breaks over the years. It is usually possible to make a snow cave in the side of a drift most places.

In decent weather around a forest, a tarp with a fire in front works well as an alternative.

I have seen films of Inuit hunters out on the pack ice, building a wind break with a tarp about 3 feet high. They slept on their sleds.

Some of the people on "LIfe Below Zero" have shown  some interesting small canvas tipis with stoves in them.

They also sleep on their sled, usually pulled behind a snow machine.