Our recent trip to Preston Falls took us right through the area burned by the massive Rim Fire of 2013.  In fact, this area had been closed to all hiking for a while.  But now it's open, and slowly recovering from the fire damage.

Along the trail, we were charmed to see some signs erected by "Nerds for Nature" that encouraged us to place our camera in a bracket on side of the sign and take a photo.  We were then asked to send that photo via various social media platforms to their attention, and help them track the recovery of the forest. 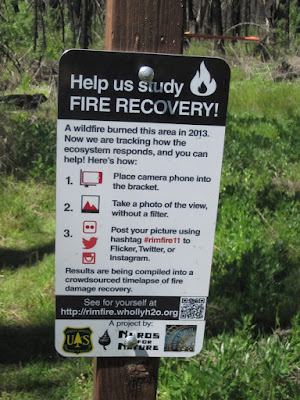 First of all, we love the name Nerds for Nature.  Secondly, we love the idea of using camera phones and social media to monitor the forest.  And third of all, we love the fact that these nerds got out into this area and put the signs up to make this all happen.  And yes, we took photos.  Now all we have to do is join Twitter, Instagram, or Flicker...hmmm. Here's the photo, at any rate: 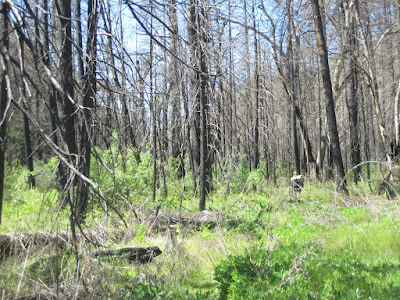 And here's a link to Nerds for Nature: http://nerdsfornature.org/index.html

With this year's moisture that forest will recover quickly.  The bottom photo shows an excellent shrub and herbaceous layer in place after less than a year.  It will take time and some assistance to re-establish the tree cover.

One of the important factors that laymen (and meteorologists) often overlook is that the root system of the burned forest is still intact.  A few species will resprout, but the root mass is very effective at holding the soil mantle in place.  Even on slopes, there is less erosion than most people expect.  The root mass will take approximately 7 years to decompose, allowing an ample window for reforestation.

The photo shows the results of a fast moving and not very hot fire.  The trees burned were relatively young and overstocked.  The foliage was removed, but even the small branches are still intact.  Relatively cooler fires do not sterilize the soil nearly as bad as hot fires, but they release a lot of nutrients. Considering the dry conditions, the above scene is very positive.  Thanks for showing the results of a large and destructive fire that still has a silver lining.

I think that is a terrific idea! In the Yukon there are signs marking the dates of forest fires and interpretive centers along the highway to explain the regeneration process and natural succession. Up here, the Boreal forest is fire-dependent; the cones of many of the conifers being serotinous in nature.

In fact, it is possible to make the case that all forest types are fire dependent. The drier ones are the most dependent on fire for reproduction.  Serotinous cones like lodgepole pine are a great example.

In the NWT do you have white spruce and black spruce like northern AK?  Maybe some birch, aspens, and black cottonwood?  Or are you far enough east to pick some other species?

One thing we noticed in the Rim Fire area was the number of live oaks that had sprouted huge clouds of new growth up from their roots since the fire.  The trees themselves were charred, but the new sprouts were shooting up like....wildfire!

ppine,  In the NWT do you have white spruce and black spruce like northern AK?  Maybe some birch, aspens, and black cottonwood?  Or are you far enough east to pick some other species?

We have white and black spruce, larch, jack and lodge pole pine in the south and some balsam fir. Along the Liard River area we have large stands of lodge pole pine, aspen and balsam poplar. Birch is found throughout and even on the barrenlands.

Talk about fire recovery and needing that to thrive, we have one of the prime examples of that in NC, the longleaf pine. It grows low and shrub like for a while then shoots up 5 or more feet in a growing season to get above the low wiregrass fires that used to be common around eastern nc. Now they do best on the bombing ranges on Fort Bragg and other bases where fire occurs on a relatively frequent basis.

Back to the thread, I love this idea of social media being used for scientific monitoring.May have to consider that for some longer term water level monitoring in the future.

Thanks for mentioning longleaf pine.  It has adapted its phenology and growth habit to benefit from fires.  Incendiary fires have been a common land use practice in that part of the US.  Foresters used to think of incendiary fires as a problem, but now they realize that for the most part the concept benefits southern forests as long as they are kept in check.

Interesting group...Wish they had a group like this for the East Coast..Be interesting to see the rebirth of area's via pictures..