What really kills you...

We have a whole page on this on our website.  We try to convince people that when they are backpacking, they should spend a lot less time worrying about lions and tigers and bears, and a lot more time worrying about fast water, cold, and getting lost.

And that drive to the trailhead is probably the most dangerous part of backpacking...

Sort of surprised to see that exposure is so far down the list. I guess a lot of NP visitors are strictly front country so that cuts down on the number being caught out unprepared enough to die.

That high drowning number is a testament to how quickly things can go bad. We never paddle without everyone's vest securely in place. I have no delusions that I'm going to "save" anyone if they get into trouble. As for crossings I try to avoid big ones whether I'm alone or with others, but especially alone.

The water doesn't surprise me..The Vehicle accident on does...

hmm, "Other" is a substantial category on this list also, wonder what those are....

As a formerly active member of  wilderness SAR, this list seems correct  Our single greatest tragedy was a flash flood incident that drowned seven immediately.  About every other operation involved a fall victim, most of whom were not actively climbing but who simply wandered onto precipitous terrain - like the graduate student who celebrated the successful completion of his oral exams by going for a hike - wandered onto a sheer rock face and fell 300 feet...

A good article. It does a good job of describing the habits of tourists who rarely get out of their cars for long.  The title should be  more like "what really kills them..." 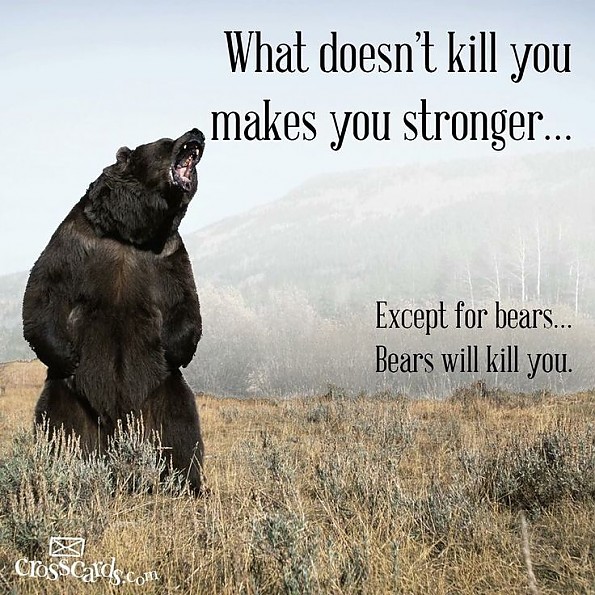 For people that live and work in the bush, the ranking of ways to die would probably be similar.  There is no doubt that drowning and falls take a lot of people. Horse wrecks kill more people than most realize. Really experienced people have less problems with exposure, but they are out there during the worst times of the year.

Working in a place like Alaska we were flying all the time in helicopters and float planes. The weather is terrible so some people die that way. I lost some friends I went to forestry school with due to helicopter crashes during fires.  We saw bears every day, so interacting with them cannot be avoided entirely. Once in awhile somebody dies. We always carried fire arms but were safe about it. Week end nimrods can be sloppy with their gun safety.

That "other " worries me. I assume it is a combination of different events. The usual scenario would be tripping in camp, landing butt-first on your buddy's crampons, shrieking so loudly as to start a stampede of the last remaining Yellowstone buffalo herd, and dying of a heart attack just before being trampled. You know, natural causes.

The "non-vehicle transport" is doubtless due to llama bites, although it might be horses. Of course, it could be SAR folks, sick of carrying unprepared fraternity brats down the mountain. Listening to the whining because their feet are cold... you gotta figure even SAR have a breaking point, as do ledges; so sometimes "whoops" may be the only proper solution. Or not. :)

But I was thinking "non-vehivle transport" was falling off  your horse...or maybe your Segue?  Skateboarding off Half Dome?  BASE jumping into a cliff?

The "other" cateory most likely includes medical situations, like fatal coronaries and similar events.  I know of at least one event in which the cause of death was not established....

The majority of SAR operations I've been involved with have been horse-related.

I've been told by an equestrian friend of mine that the cuplrit is usually rider ego, as opposed to ignorance. A group of riders proposes a ride, and someone eager to join in says "Oh yeah, ol' Besse can handle that" knowing full well that she can't and won't. I've heard this sentiment echoed by the riders I chatted with as the evac chopper/ambulance sped off, as well.

Horse then protests at the worse moment, and falls on rider, on jagged rock.

Now, though the horse never had the technical training to negotiate the terrain, nor appropriate bond with the rider to trust their judgement, I'll be darned if the FS wasn't repeatedly sued for failing to adequately mark the trail.

Of the 850+ miles of trails in the Smokies, 550 are open to horses. I have been continually amazed at how they can get horses to navigate some of those narrow winding paths safely. I have seen a bone pile and a cross before where the horse didn't make it.

Susan and I did the Grand Canyon Mule ride a couple years ago and it was also freaky how sure footed those mules were. The concessionaire claimed they had never lost a life where the mule was at fault. :)

This is a terrible video (super shaky but hey I was riding a mule) but check it out at about 1:50:

Thanks Patrick. Great job. All conversation ceases in the first quarter mile.  It is the land of the vertical and is no joke. No fatalities in over 100 years.

I have had 4 saddle mules in my life and they are at their best in the rough stuff.  Mules serve an apprenticeship in the Canyon before they are ready to carry passengers. They pack for awhile and the good ones get ridden. I have two friends that have packed in the Canyon for the NPS. They have a thousand stories, like the ones about the rings. They all talk about the tunnel in the dark making the big sweeping turn before stepping out onto the swinging suspension bridge to Phantom Ranch. Mules have very strong self-preservation instincts and it takes them awhile to get used to it. So do people.