Found a pair of boots to replace my old Pivettas

Two weeks ago I purchased a pair of Danner Mountain Light IIs. I walked 3.5 miles a day for 4 days and they were breaking in really well. I know the Goretex liner might be a little warm in August so I thought I'd look for a pair of nicer used Pivettas.

A few days ago I was searching eBay and noticed what looked like a very nice pair of boots. I haggled back and forth with the seller who really had no answers for me about the boots. He said they were like new so I took a chance. Today they showed up.

These boots may have been worn once. Thick, stiff and heavy. I love them. I do not remember my old pair being this stiff, but that was 30 years ago. I waxed up the new boots and headed out. 3.5 miles (my favorite loop), did I mention these things are stiff? I may have to walk every day for a year to break these in. I love the new Danners But they are not built like these Pivetta tanks. Wow, I'm boot blessed. 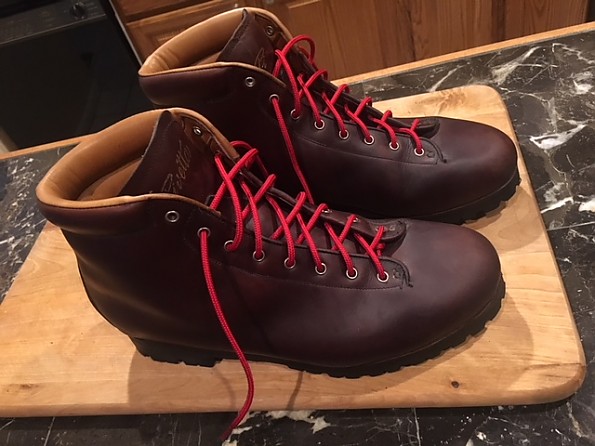 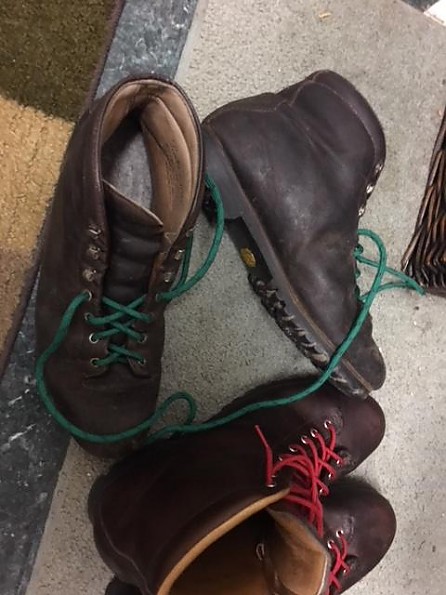 Looking good there, but I can't imagine what your feet looked like after hiking in them without a break in period first. Wearing my Limmer Standards around the house was pretty painful for the first few days and I don't think I went 3 miles in them at once for at least a month.

Few things in life beat the feel of slipping into a pair of leather boots that fit. Glad you've found a new friend. Maybe a review is in order once you've gotten to know each other a bit more? Welcome to TS Anthony!

That is a nice looking pair of Pivetta Five's! I wear the Pivetta Eights for daily wear and have since the early 70's. Pivetta's, imo, are the best boots ever made. :)

I am still keeping an eye out for Five's like yours in my size.

Feet are fine.  I have old grunt feet.  I walked another 3 in the new boots this morning. They are going to take forever to break in...Ha!.  Wondering how the boots got to the states if they are not DMCs?  They are only marked " Pivetta Made in Itally".

amazingly well-preserved. not many places left to get new but 'old school' boots.  i'm sure we're on the same page that it's well worth the investment in time and blisters, once they get broken in.

Well, put probably 12 miles on the new Pivettas and they have not softened up much.  These things will probably last forever.

A note of caution:

While old school boots in mint condition can be like a discovered treasure for those who go that way, do note old boots have a liability that can be like a time bomb.  The glue holding the lug sole can become brittle with age and sometimes will fail catastrophically on boots that have been unused, in storage, for a long period of time.  It doesn't matter if the boots were well used or in mint condition, or how they were stored, it seems the long period of nonuse is the risk factor.  This happened to me with two pairs of old school, quality, FGL boots from Italy.  Those making similar acquisitions may consider having the soles re-glued to preclude such misadventure in the BC.

good point on used gear. I think storage conditions, how the item was cared for and/or cleaned, and geography can influence this.

-friend's tent fly delaminated after being stored a few years in a hot, dry attic.

-have seen rubber parts on long-stored boots flake or turn 'slimy,' stitching with rot, and leather with stubborn mildew, stored in hot/humid locales though inside closets indoors.

-have had a couple waterproof/breathable jackets delaminate or have the seam tape unstick or corrode, not sure why, but both older jackets and the materials got 'brittle.'

-don't buy used climbing gear - crampons, ice axes/tools, carabiners and other climbing hardware, harnesses, ropes. don't do it. if any of this has metal fatigue or micro-cracks, stitching that won't hold under stress, damage to the core of a rope, you won't know until it fails - and failure can be catastrophic. had bindings on a pair of crampons break. darn lucky it happened before I got to the steep sections that were my ultimate goal.

I have had pretty good luck with used plastic double boots, sleeping bags.

These boots appear to have been thrown in a closet for 40 years.  Glue is holding up and after 20 miles are finally starting to feel less stiff.

Ah, Tony, your feet are starting to break in. :)

Haha!  Maybe they are.  I must admit, I'm really liking the Pivettas.  Kind hard to explain to the wife why I'm wearing the 40 year old boots with the new Danners sitting right next to the door.

4. Walk in boots with wool blend hiking socks (in house only if new and may be returned) for an hour or so.

This break-in procedure was in an old Outdoor Life magazine decades ago and it works!

BTW, I once owned a pair of all leather Pivettas I bought from HOLUBAR, an early (we're talking late '70s here) and now defunct backpacking catalog store. And I sold them as soon as I realized my feet widened by the 2nd day of backpacking, making blisters between my cramped toes.

One day I was wearing them at my friend's backpacking store in Erie, PA (Biking & Hiking) when a customer was complaining that all the store boots were way too wide. So I said. "Try mine." He did and loved them.  I sold them to him at a 30% "pre-owned" discount. (Yeah, I  had to drive home in my stocking feet. But, hey, I got rid of them.)

I have been wearing these boots every day.  The new Danners are getting jealous.  The Pivettas are fantastic boots, wish I could get another pair.

I have fond memories of Holubar, actually dating from the 50's.  We visited their mom and pop operation in Boulder during a climbing trip in 1957.  I bought a 60/40 parka from them and later a double sleeping bag that were superb items.

Thanks, actually I'd say that those look new, but not new from the store and I think you got a great deal on those boots.  I remember back in the day when boots like that cost in the $200 to $400 range at the boot store.  I have a pair of those that I'm going to be selling that are nearly that nice along with about 8 other brands of boots in size 10.5 to 9 range and just wanted to get an idea of what they are selling for these days.  Again, nice find at a really nice price.  With proper care those could last a life time.  I have a pair of Lowa's that I've had for 35 years now and are still going strong.  I think I paid around $300 for them new.