Anyone carry, despite the weight, a trail mascot or lucky charm item? Thought it would be interesting to share a photo and back story and see if this is unusual or common in our little group. It goes completely against my pack weight reduction pastime... 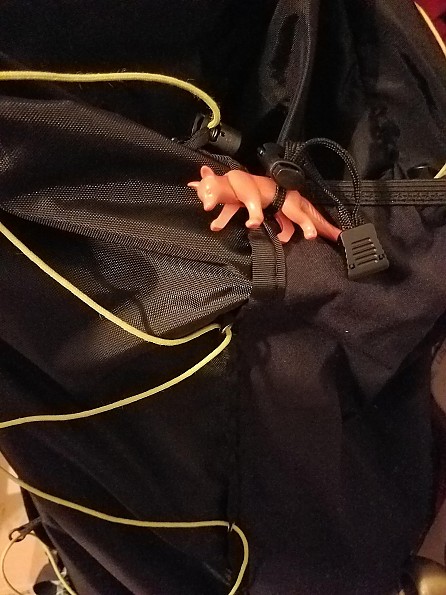 I carry a small toy fox on the outside of my pack. It's from one of my now grown sons. I spent many years in father-son groups as part of the Y Guides (formerly Indian Guides) program with them. Due to my backpacking hobby and frequent travel for work, my oldest named me Roaming Wolf and gave me that toy. It's still with me 15 years later and reminds me of all our trips and time together. Here he is on the west coast of Scotland after my long walk...usually shows up in at least one photo per trip. 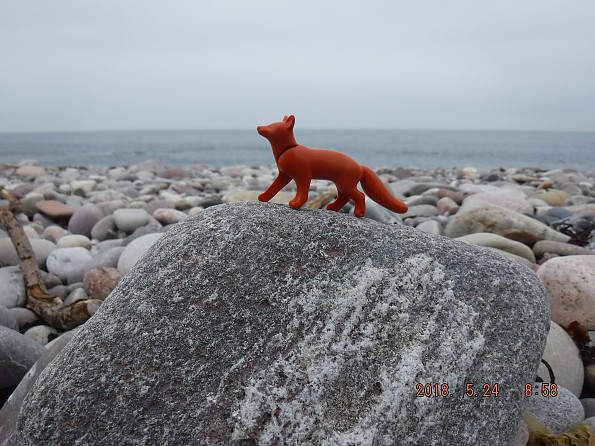 Nope.  Just my wife.  But she carries herself

Not me, but I know some folks who carry stuffed animals for poses and photobombs on the trail. Most notable is a pink chicken. Balzaccom knows of whom I speak.

I think it's a fun idea, and I've posed with the Pink One several times, but I don't have a lucky charm myself and would cringe at the weight no matter how light because it's completely non-functional (unless, of course, it actually does bring some luck).

BTW, if your son named you Roaming Wolf, why did he give you a fox?

Good idea.  My dog is my trail mascot. I recently mounted two pins on my pack, one for Mt Rainier and one for the Golden Trout Wilderness Area.

I have Rocky and Bullwinkle on my desk though.

A stuffed animal I have seen as well...i thought they would get grungy after a while on the trail. Mine weighs in at a whopping 6 grams so although not weightless it provides me with memories and thoughts of my kids while wandering. Well worth it.

It's a fox for a couple of reasons...limited Playmobil animal selections in the 90s and my sons guide name was Red Wolf due to his scottish ginger hair...also not sure he knew the difference back then.

I carried a Coghlan's Four Function whistle for years as I wasn't sure if it was a good luck charm. It came on every trip and I always came home alive. There was some concern that if I didn't bring it bad things would happen. Then I forgot it one trip and lived so I didn't worry about it any more :p 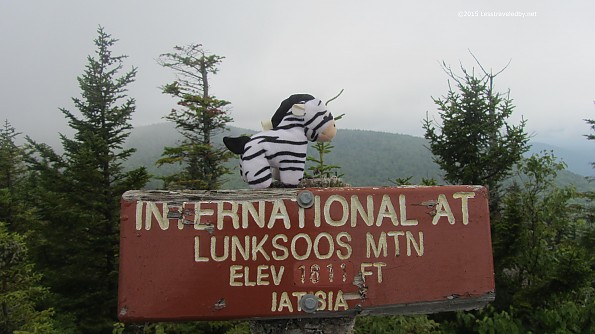 This guy came along in a tiny zip bag because my daughter handed him to me as I was leaving. She wanted me to have something to snuggle as I recall. Brought home pics of it all along my route which made her happy and justified carrying that extra weight.

My totem animal is the cow.

A stuffed animal I have seen as well...i thought they would get grungy after a while on the trail.

My friend with the pink chicken wraps it very carefully in at least one trash bag, with nothing else in it, and carries it deep inside his pack until it's photo time.

I think I am invited on trips with certain people who consider me their mascot.

It's the Hawaiian shirts Ed...although maybe less a Mascot than an emergency signal for searchers? Should be able to find you from a couple of miles.

It's the Hawaiian shirts Ed...although maybe less a Mascot than an emergency signal for searchers? Should be able to find you from a couple of miles.

The shirt is not necessary - you can home in on my location from over the horizon if you happen to be downwind.  In any case the shirt serves more as a warning than distress beacon.  It is probably posted on some trail heads, next to the bear advisories.

I have two Kimmidoll keychains, a modern version of the Japanese kokeshi. One (Nobuko) is attached to whichever handbag, briefcase, or backpack I happen to be carrying that day, and the other (Tamako) is attached to the gig bag of my bass guitar, because the name of my bass is Tamako. I don't have a specific trail mascot, but perhaps I should! 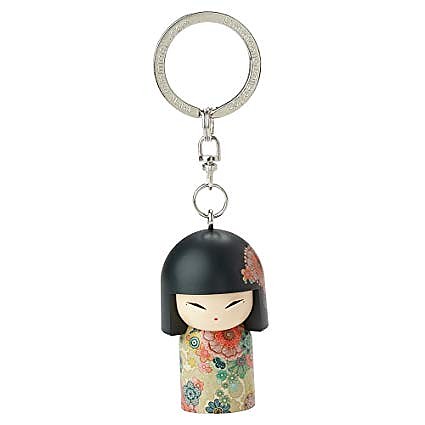 i have a very old, small bell given to my mother from a departed friend of hers - it has such a beautiful tone. i hook it to my pack as a "bear bell" when i am alone on the trail and its very early in the day or if i'm on a long stretch without seeing anyone for awhile.

i also have fashioned a pretty sweet walking stick from a branch of a eucalyptus tree in my yard that i have enjoyed bringing with me. i have this notion that it helps me bring back some of the forest magic to my home when i use it backpacking...

Not me, but my friend has a little teddy bear on his backpack.

I found a stuffed animal the other weekend just lying on the trail - a small monkey.  Figured someone had it strapped on the outside of their pack loosely.  It was clean as a whistle after a day and night of rain, so I transported him (or her - no way to tell on a stuffed monkey) to the trailhead a mile or two down and left it under the covered sign.  Maybe the owner will search for it or it will be adopted.

But a little superstitious .After losing a bandana on a trip many years ago .The trip turned south fast.

So on any trip I go on whether it be by foot or chopper I always have a bandana at the bottom of my pack.