In October 2008 I posted that I use Mapcard.com for all my maps. Well currently I am not and tried going to the then suggested site of

suggested by one of the other Senior members. But I found it only lets you look for the maps to order, but one cannot save the images for later use.

I let my Mapcard site subscription run out and can't afford yet to renew it. But as soon as I can I will restart it as you can save any topo to your PC for later use.

Below is a Mapcard topo that I saved to my PC after marking a route in red on it that I bicycled a couple summers ago in Jackson Hole. 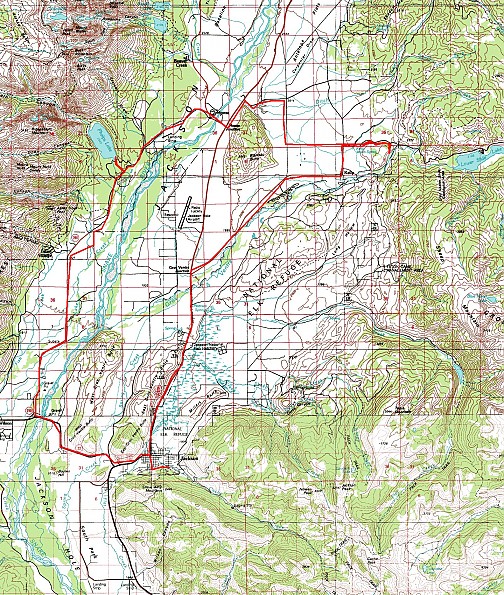 I don't know the area you want maps for but http://historical.mytopo.com/ has historical topos for some states. The advantage of topos from 1887 or 1932 is that they show old farms that are now overgrown. This is great for bird-hunters, explorers, bottle collectors, etc.

Here is another source: http://www.maphistory.info/imageus.html

Thanks, I saved all three to my favorites. I am mainly now looking for maps of the state of Utah around the Paria. Soon I hope to renew my membership with Mapcard. I have used them for about 10 years now.

The new England maps look interesting. I am originally from upper state NY on Lake Ontario.

But that only allows you to locate the maps for sale not save them to your PC which I can do at Mapcard for $19.95 a year

I don't understand??? All you need to do with the map locator is set a marker on the map, then click on the marker and you will see the following:

Then just choose which map to download and Voila! a free zipped pdf file topo map.

How did you copy and paste the whole webpage into your post/reply?

And thanks for the tip on how to save maps! I really look forward to saving maps for future use.

I have downloaded the zipfile, now how do I reopen it where i stored it in my documents? When I try to open it this page pops up. What do I use from the list to open it. I do not know.

Most people use Adobe Reader for PDF files. It is free to download at http://get.adobe.com/reader/

The map pdf files also contain special map capabilities which require a plug-in to Reader, but you can ignore that.

Whats the Platapus'es in your pictures? Are you from Austrailia?

The platypus are there because someone indicated a problem with leakage : )

US and Canada. These days NH.

If you have any type of mapping software such as Garmin Mapsource, etc. (There are free applications available), you can get many free maps with plenty of detail at GPDFileDepot. Here ius a link to the maps for Utah:

If I change the last part of that webpage can I get it for any state Mainejac?

With regards to the maps from the USGS store. Keep in mind the date of the maps. I downloaded one and the latest was 1994 (Mt. Harvard, Colorado). The magnetic declination has since changed (as well as its rate) by a few degrees. And unless you have a nice big plotter (24" X 36" paper), it's no longer to scale. I see these maps as good for pre-trip research, but I don't know how you would take these in the field and expect to get much out of them other then general location, elevation etc. (if you can't plot it to scale). Seems to me you would want a properly scaled map in the field.

Am I missing something here? Do you guys plot these to scale? Or half scale and use them? I'm a bit confused (newb).

I print the USGS maps to scale most of the time, and to half-scale sometimes. I do have a large printer (up to 17x22 - a 1:24,000 quad is about 18x22.5 at the neat line), but I more usually print on 8.5x11, legal, or C-size, since that usually covers the areas I need. I crop the image to the area needed. Or, I use NatGeo's Topo! to select the area needed, since they provide stitched maps, and my areas of interest are "always" on at least one border and frequently in a corner of 4 quads.

Actually, if you print at an even multiple of the scale, it doesn't really matter. It doesn't take a lot of practice to get used to the scale of the map, IF you are travelling with it in hand and staying in touch with the map as you should.

If you import the .pdf maps into Gimp2 (as one openware example) you can then markup (with new deviations), crop, and print sections at 100% using a normal 8.5" x 11" printer.

Slicker than deer guts on a pump handle!

Thanks fellas that makes sense! :)

Here is another map site I found and have been using quite a bit. Big downside to it is you can't print enlarged portions of them unless you copy by print screen and paste the portion to another program. On the plus side it has all the USGS topos for free listed by state and you can really zoom in on them and not lose the details. Great site for research.

I now use the USGS Map Locator and have saved many topos to my PC. I like looking at maps to see where I want to go. I often combine Google Earth and Topos to study places I want to visit. Like for Jenny Lake in Grand Teton Nat Park below: 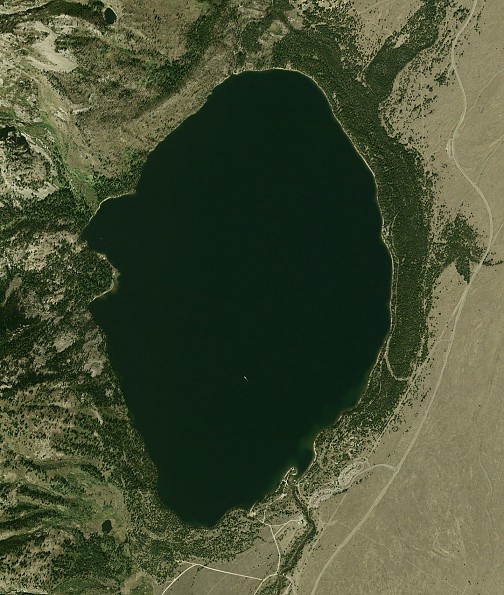 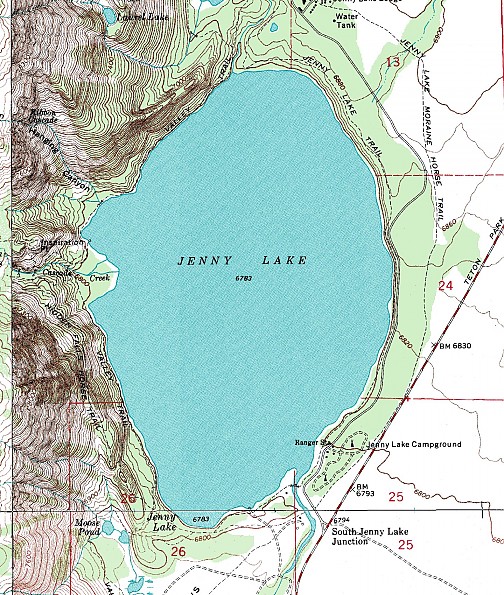 You should download USAPhotoMaps. I found it in a forum, can't remember which site, but it is a program created by a retiree that pulls USGS maps off of the completely free Microsoft TerraServer website and stores them locally on your hard drive. Not only does it provide topo maps but it will also show b&w aerial photos and color aerials of urban areas as well. I've been using it now for about a month and have been very pleased with the advanced functions it has. You can Google it or go straight to the developer's site http://jdmcox.com/. The great thing about this application is it cuts the need to use Google Maps/Earth. Once you get used to the keyboard controls its amazing

Go to any address, populated place, USGS landmark, or lat/lon in the U.S.A.

Transfer waypoints, tracks, and routes to and from most GPS receivers

Looks like he has been a busy man since retiring, with 22 downloadable sites including http://jdmcox.com/. Thanks cabbott9. I especially like the alarm clock one as I have been wanting to get an alarm clock. Not that I really need to wake up at a certain time in my semi-retirement,but never know when I could find a good job.

If you just want to locate maps and look at them online, without necessarily downloading the maps, but maybe printing the ones you want at the scale you need, then check out the USGS search engine using domestic names in the Geographic Names Information System (GNIS). It basically has every name of every feature on every topo map that USGS has and at every scale, in several different formats such as Terraserver, raster file, orthophoto quad, etc. Search by feature name and state, with or without the type of feature (stream, summit, populated place, etc.) http://geonames.usgs.gov/pls/gnispublic/f?p=127:1:963621600890958

Once printed you can mark them up, waterproof them, copy them in PDF, or whatever.

I like looking at the original 7.5 quads in raster format. You can piece also them together from the multiple partial files on the screen if you have the patience. Maps are also available from USGS in digital format on CD's. Order from USGS, Denver, CO, 80225.

I came upon this viewer while searching the above-linked Geo Names query system.