I have a Mtn hardwear Pinole 20 degree synthetic bag. It's a long, yellow, gray, and black. I can't find the spec on it but the new one (not sure if there are any changes) is about 3 lbs 8 oz.

I am wondering (1) what size compression sack i would need for this fella and (2) if I do a pack liner compacter bag or trash bag, do i need a waterproof compression bag or can i get by with a regular.

Also, seems like the best brands are sea to summit, and granite gear. I guess i'd like to support granite gear since they are Minnesotans. Any advice?

Compression sack size is somewhat trial and error. You got a stuff sack with your sleeping bag (plus maybe a storage sack, which you should use when not using the sleeping bag ). The stuff sack is the first approximation to the size of compression sack. I generally get the same size if it is pretty close or slightly smaller for synthetic bags. With down bags with 800 or higher fill, you can usually go a full size smaller. Unfortunately compression sacks are only sized S, M, L, etc, and are inconsistent I their measurements not only from one manufacturer to another, but also from one style to another from a single manufacturer - waterproof, silcoat, Cuben, non waterproof, end compression, circumference compression.

I prefer end compression, silcoat, light as possible, and individual plastic bags over each item in the pack, even if the stuff sack is waterproof (the opening where the air escapes is not waterproof, after all). While I have multiple brands for our dozen bags, I tend to prefer Sea to Summit, with Granite Gear a second choice, and the "opening" over the "valve" for letting the air escape (I have had the "valve" type fail to seal after a while).

Be sure to minimize the time in the compression sack - they speed up the loss of loft with age quite a bit.

Also, when including geographic source as preference, keep in mind that company HQ is NOT the place of manufacture in most cases these days.

Aahh Bill, thanks for that reminder about HQ and manufacturing. :( I didn't occur to me that China is probably making this stuff...I will have to check into that.

Thank you also for the tip about valve part not being waterproof, makes total sense but i wouldn't have thought of it.

So basically if i can, bring my stuff sack into the store and find a compression sack that will approximate it?

Bill i checked it out and this article says GG  is made in the USA. Admittedly, I don't know if it is their entire product line or just one or two items.

But are they completely in Minnesota? (kidding you a bit, since you said your loyalty to MN is pushing you to choose Granite Gear over the Coloradans who run Sea to Summit - there was an article about the really nice house that the S2S couple who own near Boulder last week).

But yes, holding your supplied stuff sack up to the various compression sacks is a good first approximation. Or, you could just measure it and go by the measurements on the packaging of the ones in the store.

A hint on stuffing - start by stuffing the foot end into the stuff sack first. This lets the air come out through the more breathable inner liner and thence out the face area of the sleeping bag. Doing it "face first" tends to trap air in the foot section and be harder to force through the less breathable outer shell.

Also, when you wake up in the morning, especially if it has been a cold night, which builds some condensation in the fill of the bag, roll the bag up from the foot tightly to squeeze the moisture- laden air out of the bag. When you start sub-zero camping, you will also want to roll it up first, then fluff it up to get dryer are back in the bag, then roll it up again to get more of the moisture out. When Will Steiger and crew did their first-ever hike to the North Pole, they didn't do this (who knew, back then?), and gained about a pound a day of frozen perspiration and breathed-out air in the bags, so when they got to the Pole, they had 70-pound bags that were stiff as a board.

One big enough to get your bag in.  Take it to the store and firgure it out.

I agree with ppine, bring your sleeping bag to the store so that you only have to do this compression bag thing once and for all.  If I were looking for a new backpack I would do the same thing, that is, bring all of your gear that you plan on stuffing in and on the backpack to make sure it's the right size.

the same size as the stuff sack that came with the bag is a good place to start. since it is synthetic, it won't compress that much anyway, but what the heck!

It's a compression sack, TJ, so it's intended to reduce the volume of the sleeping bag by squashing out all the air.

A good compression sack can squash down a sleeping bag quite substantially, regardless of whether it's down or synthetic.  The goal in using one would be to start by dropping the volume by at least half, and  I know my OR sacks compress a sleeping bag to less than a quarter of its original size and even smaller in the case of down.

I have three sacks for each sleeping bag. One is the bag it's sold in, usually around a foot in diameter and deep enough to take the bag folded to half its width.

The next is a much larger storage bag that allows the sleeping bag to loft as much as it can, maybe 2' in diameter and to its full width. You NEVER store a sleeping bag squashed into a bag. The preference is to store sleeping bags hanging loosely, but that takes a lot of of space.

The last ones are compression sacks of various sizes used to reduce the volume of the sleeping bag when backpacking. Typically, my down bag will squash down to about a 6 x 8" ball. 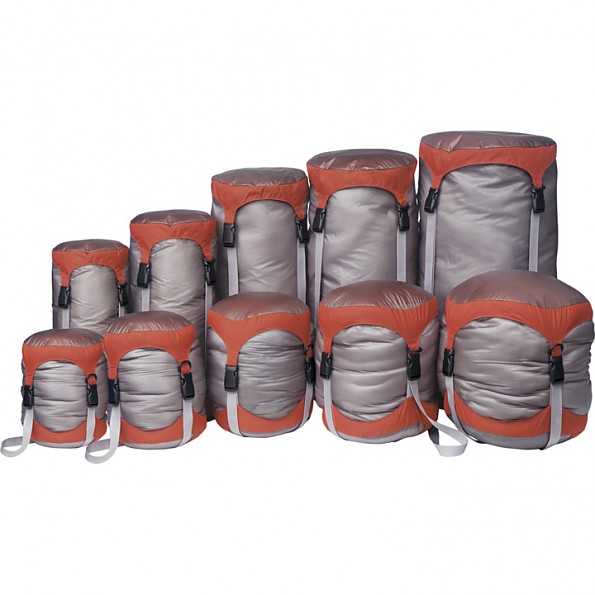 As you can see, compression sacks come in a wide variety of sizes, not just Small, Medium or Large. I have a few, so I can use them with different gear including clothing.

Start with a size or two smaller than the sleeping bag stuff sack, and see if you can squash the bag into it. If you can, cinch down the straps - you'll be surprised by how small it winds up being. That will also show you whether you can go to an even smaller bag!