what food do you guys to cook in extreme cold?

I just came back from camping trip in Adirondack state park. On the last day, all my foods were frozen. It took a long time to thaw them when cooking them.

what food do you guys to cook in extreme cold?

how do you cook in extreme cold other than using dehydrated food?

Well, other than dehydrated, I use a lot of grocery store bought dry goods. That is, any type of packaged food that can be prepared by adding water and cooking.

The instant foods like Oatmeal or Ramen Noodles are the easiest, but I also use the types that require you to bring to a boil & simmer. With the latter you can save fuel (if you're using a stove) by bringing the food to a good boil, stir well, turn the stove off, and then put your pot in some type of insulating sleeve - often called a cozy.

There are many good videos of this subject on YouTube.

I keep it simple which means dry, boxed foods that can be cooked with boiling water.  Maybe not the tastiest way to eat in the woods but I don't like wasting time or energy cooking something more complex than that.

As far as snacks with lots of energy go, I eat kit Kat bars, they are always easy to eat no matter how cold they get. Snickers bars are inedible below freezing.

I have hung around with some dog mushers. They are out in the cold and snow for long periods. Most of them have a simple, stream-lined system of food prep. They make dishes like spaghetti, stew, etc at home and freeze it in portion controlled bags. Then in the field, they heat a large pot of snow, heat it up and put in the bags. This system works best pulling a toboggan or small sled because of the weight. It takes little time to prepare and is really good after a day of skiing, shoeing or mushing. Hot nourishing food is important in the cold.

As far as snacks with lots of energy go, I eat kit Kat bars, they are always easy to eat no matter how cold they get. Snickers bars are inedible below freezing.

Yeah, maybe he is asking about snacks, you are right about snickers that's for sure!

i usually carry some energy food inside my shell so it's not frozen when i stop for snacks.  ziplock bags of gorp or energy bars, zipped into an inside pocket.

for meals, it's all dry - either prepared meals in a bag or things I bag in advance.  pretty much the same way Mike described above - and cooked with melted snow, heated over a stove.

What ppine is describing are what are commercially sold as "boil in a bag" meals which can be quite good, if a bit heavy. Having a sled, even a small one makes taking them a lot easier. Aside from those, sites like www.trailcooking.com have recipes for one pot meals that should work in winter.

Homemade elk stew with wine makes life worth living. You can have dehydrated rice and beans and prepared pasta dishes. Good food especially at night changes everything. It is okay to have simple oatmeal and trail lunches, but at night we like to have some fine cuisine. I had some King crab legs and white wine in the bush once for a birthday while looking at 13,000 foot Toiyabe Peak and I will never forget it.

Hot tent campers like the folks at the wintertrekking website carry in fresh food quite often, even if it freezes, because they also have a wood burning stove with them for heat and cooking. It is a very different style of camping than what most of us are used to. More like car camping in a big tent except they are towing most everything on a toboggan or sled and are on skis or snowshoes. The stoves usually look like a metal box with a long stovepipe sticking out of the top of the tent and the tents are usually canvas. They are out in extreme cold-down to -30C sometimes, so good food is important.

Rommey's Kendal Mint Cake was once (and still may be) a staple of winter mountaineering and ski camping.  Do not let the name mislead you - it is a hard candy about the size of a large Hersey's Chocolate bar.  High calorie density, but it gets old eating mint flavor for days on end.

At lower altitudes I like chili with beans, spaghetti, and curry with rice.  One pot cooking simplifies the challenge.  Don't bring dried beans else you'll burn too much gas getting them edible. Same for the rice.  If you can get freeze dried beans, good for you, but I dehydrate my own and use Uncle Ben's rice.  Most of the remaining ingredients can be powders or dehydrated,

BTW: DO NOT use gas fuel stoves in a tent.  I know a bunch of you think you have a technique, skill or stove design that makes this safe - BUT YOU DON'T!!  Murphy camps too, and if he is there when you cook, you'll regret the consequences.  BUCK UP and deal with the elements.  Cooking in the cold is part of that experience you claim to relish, so don't be a stupid whimp and end up burning down your tent, and perhaps getting seriously burned in the process.  Backcountry lore is full of tales about fools operating gas stoves in tents.  (Some of those fools are world class expert trekkers - if it happened to them you can bet you flirt with the same fate.  And  if it is really that nasty outside, be prepared for those conditions and bring some food that doesn't require cooking.

FYI,I was not talking about using a gas stove in a nylon tent. The winter trekkers are using a wood burning stove in a canvas tent with a chimney, which is very different and much safer. An example would be the Titanium Goat teepee with their titanium stove. The wintertrekking site has a lot of info on this kind of setup for deep winter camping.

Sorry if it appeared I was addressing your comments, Tom, that was not my intention at all.

Hot tent camping is a different animal altogether.  It may have its own hazards, with CO poisoning the biggest concern, but proper hot tent camp craft utilizing wood fuel in what are typically roomy natural fabric tents (or yurts or teepees) is safe, compared to trying to a fire up a gas fuel stove in a confined, back packer's tent.

Hot tent camping can be a very memorable experience, and the only option as far as I am concerned, for those unwilling to cook outside their tents in the elements.  Some of my fondest snow camping memories were yurt to yurt skiing in the Vail area, back in the early 1980s.  I'd recommend anyone who likes XC skiing to go on a hot tent trip.  Many regions have operations hosting these accommodations, ranging from for profit operators offering hostel-like amenities and service to non-profit orgs relying on self service ethics to make things work.

Ed, didn't think you were, but wanted to clarify that while there is an exception to the general practice regarding stoves in tents, it is very gear specific. Just because you may see this setup, do not assume that the warning is somehow wrong as it applies to nylon tents and gas stoves because it is not.

A stove fire after the stove was launched from the tent: 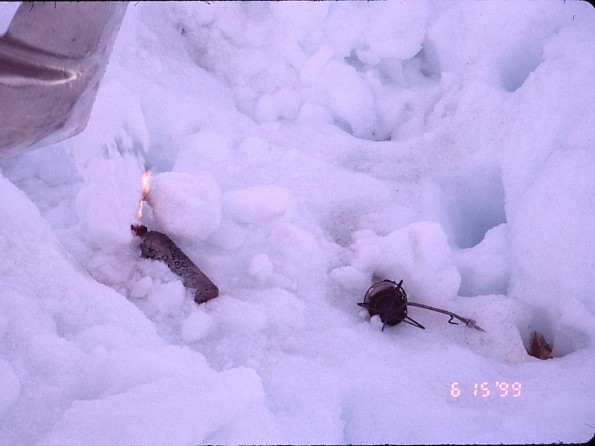 The "chef" was a professional guide, with years of experience. This was at the 14,000 ft camp on Denali

Below is an Arctic Oven, a double-wall tent made specifically for use with a wood stove. It is what Tom and Ed are referring to as a "hot tent" 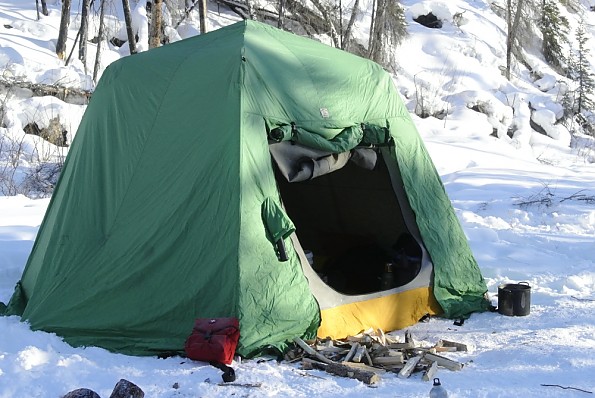 This was on a dog-sledding trek that Barb and I were on in Alaska along the Yukon River. Below is the interior of the tent with the stove visible: 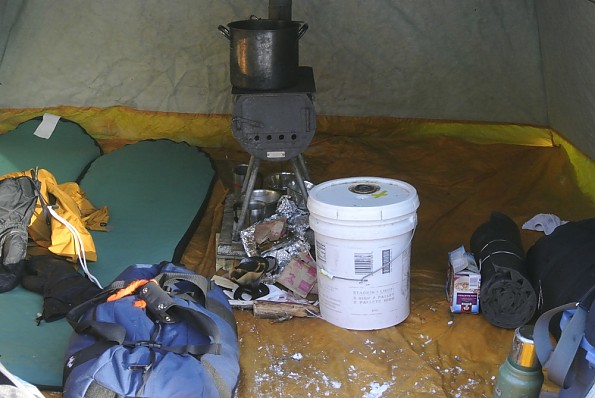 I usually take off after lunch on Saturday as I usually have something to pick up at the Post Office which opens at noon for an hour that day.  I work out of town, so Saturday is the only time I can make it in.  As for dinner, pasta meals which let me use my old stoves, breakfast may be hot cereal, coffee with a bar of some sort maybe or sometimes pancakes and bacon, after the coffee, although when it gets really cold, hard to keep the pancakes warm or the batter and syrup thawed.  More of an issue packing up in the morning, especially if below zero, takes quite a bit of time for me to stuff my down bag with DryLoft as my hands get cold pretty fast.  I guess I could do without the stuff sack and pack the bag in my pack first.

Thanks to Whome for mentioning Kendal mint cake. That is going back a ways. For winter travel, poptarts, candy bars and kit bars will be okay for young people on weekend trips. For all other conditions it takes real food and that concept needs to be emphasized. In the cold, more fat and protein are required, just ask an Inuit.

This conversation reminds me of an ill-fated Arctic expedition put together by a group from California. They had planned to ski from some far-flung location to the N Pole over a period of many weeks. They brought the same diet they ate at home, yogurt, salad, cheese, quinoa, bulgur wheat, New Age Food. After less than a week they crapped out and headed home after being rescued.

An Arctic Oven seems like a great idea if one can afford the cost. I have camped in canvas tents with tin stoves a lot and there is nothing like it, especially for trips over a week in the cold.

First off, what do you mean by "extreme cold"? For all of my Arctic winter expeditions, with temperatures in excess of minus 40C, I take mostly oatmeal, butter precut into serving size pieces, powdered milk, TVP, instant rice, beef jerky. None of these has a lot of water in it so does not freeze. I also never cook my food; I pour boiled water over it and place it in my sleeping bag then go about melting more snow for tea and the next morning's water. When the stove is turned off for the evening the silence is profound and startling. Pasta is ruled out as you need to drain the water off which is wasteful. Contrary to popular opinion, I also always cook in my tent.

As for Kendal Mint Cake, I have been taking it (and Bear Valley Pemican Bars) on all my winter outings for over 30 years. 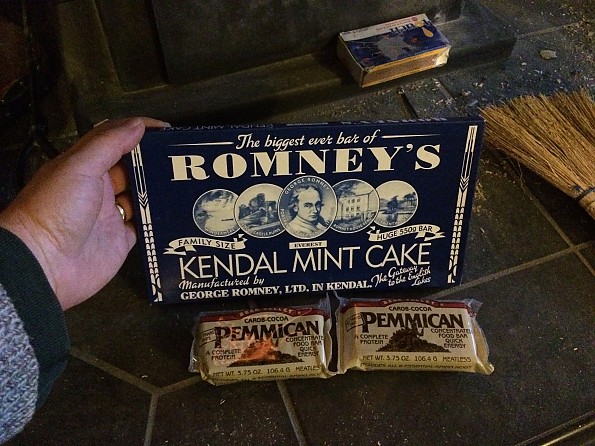 dehydrated/instant food is what most everybody uses in winter. anything else just uses too much stove fuel.

LOTS OF CARBS AND LOTS OF OILS AND FATS.

Your body will crave fatty foods after the first day.

Caffeine (this includes chocolate) will constrict blood vessels and make your extremities colder as well as make breathing at higher altitudes a bit more difficult.

Alcohol has just the opposite effect but also causes you to lose heat faster than normal.

So I guess the answer is to lace your morning coffee with some Di Sarrono, Tia Maria or Yagermeister. ;o) (OK, Jack Daniels for you bikers.)

Topic: what food do you guys to cook in extreme cold?