tarps and hammocks and DIYing.

I just read an awesome thread, so old that it was closed:

In 2015 it's hilarious to see would-be Wise Men badmouthing techniques that today seem so mainstream, commonplacem, and common-sensical!

I've been hiking and camping in my own way since the early 1970's. Today we have respectable names for what I was doing: Hammock Camping, Ultralight Hiking. But all along the way there were technical issues that caused many to doubt my sanity. It's encouraging to know that if you stick to your principles long enough to what you know to be right and good (and if you don't die in the process) then you will eventually be vindicated in time. Lauded. Heroic!

So, be careful out there, kids. But fly your Freak Flag. Because those of you that try something new are the ones who are going to invent the next forms of industry on behalf of the rest of us "Nattering Nabobs of Negativism".

Good to have you on Trailspace Steve!

I've been hammocking since the early 80's on & off.

I started with a gathered end bedsheet, and soon got a cheap GI hammock from the Army Surplus Store. It was absolute crap like most Army Surplus gear I've bought.

I now use custom made Silnylon Hammocks, much nicer.

I started with tarp tents and lean-tos in 1961. Now I am confused by modern materials.

I miss Lodgepole in the thread above. What ever happened to the guy?

I bought a new tipi this summer from my brother and it will be going up soon for the fall doins.

I used tarps exclusively for my spring/summer/fall outings this year.

You can get great stuff made of silnylon that is very lightweight, and reasonably robust. Also, since the ultralighters have switched to cuben, the silnylon stuff is much cheaper these days.

I picked up a Siltarp 1, and a Silwing at the start of the season for $45 and $60 respectively.

SilPoly is a newer material out there that doesn't stretch like silNylon, the membrane seems to offer less weight that silNylon too.

I like tarps as well and since switching to hammocks it is a must. I slept with no shelter for many years growing up and have slept under a tarp on the ground as recently as last fall. I am not a big tent fan but in the snake season I cant mentally work myself up to it anymore even if I weren't in a hammock now.

the bugs are a pretty minor issue to me, I've been spider bit quite a few times and skeeters aint a big thing to me, for some reason they don't like me.

you know, you got me doing some research. it's unclear if silpoly is new or if it's been re-introduced with a different name. also, its benefits and specs are a bit mysterious. thanks for keeping this interesting!

Tarps are for the weak.......real backpackers sleep on the ground in only their underwear.

ok continue on....and don't forget to wave that freak flag! All joking aside it seems like a pretty biased and closed minded original article. It started out good, but petered off into a cheap rant about how the guy hates tents. Love my UGQ tarp though....

I began getting out without my family as a young teen more than forty years ago in the '70s.  I bought my first (and only) tent 20 years ago in 1995.  I find the concerns of tarp naysayers (in the thread linked above) a bit odd particularly regarding beginners.  It's not like beginners are hitting the mountains of Chile in July or the upper Yukon in February.  Beginners likely aren't even very far from their cars the first time(s) they camp.

Even car camping with my wife 25-30 years ago, we'd use a tarp and turn our only car, an old hatchback, into a camper by opening the hatch and draping a tarp over it with the hatch horizontal/half-closed once the tarp was staked down.  Two tarps (one for the kitchen), a stove and fuel, some beat up pots and pans, a couple of cheap sleeping bags, a couple of tiki torches, and some food meant a broke young soldier could take his young wife, who had never before been camping, out to the state and national park campgrounds on the long weekends he could squeeze out of a year.  Had it not been for tarps, we'd have missed out on those great times.  And great times they certainly were.

Can't even tell you how many nights I've spent under a poncho hootch as soldier in the back forty training areas of army posts.  Always had a poncho and wad of 550 cord just for a shelter.

The whole reason I like using a tarp today is because I started using them yesteryear when I was first wandering in the woods.  Why?  Precisely because they were cheap and because you had flexibility and options with a tarp.  Tarps have their places and so do tents.  For me it's never been an either/or dichotomy.  I even bought a tent once.

My tarp is a MLD trailstar..I didn't get into tarps until about 3 years ago..I generally use it during spring and summers for the airflow...

I finally remembered my password! Got a different email address these days,  so I couldn't reset it. It's been more than a year since I've posted.

Anyway, i started that original thread on tarps back in 2012 simply to demonstrate some easy to use tarp setups for beginners. The thread sure did take off, but not as i had hoped it would.

I continue to use both tarps and tents as conditions warrant ( and I even sleep inside a cottage most of the time! ).  On solo trips these days I'm mostly using a super light A frame tarp rig I made from a gossamer gear polycryo ground sheet.

It was the only sheet of plastic I had on hand that was big enough at the time. I had used it as a ground sheet under one of my tents for several years - It was still in good enough shape to turn into a shelter.   At 8' x 6' it is a bit short, I generally prefer the Frost King 84" x 110" kits. They make a killer tarp, and at 2.50 a sheet on Amazon are a heck of a deal!

I show how to make these little shelters in detail the original thread, and I torture tested all my originals to destruction. This plastic is amazingly sturdy for it's weight, the originals stood up all winter long, despite heavy snow fall. 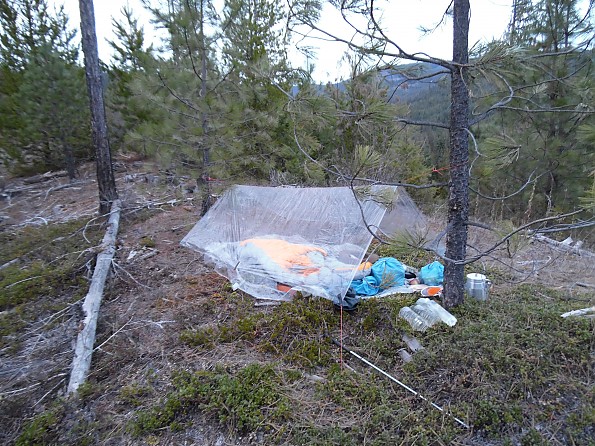 This plastic sheet weighs something like 3.6 ounces! The strings, stakes and plastic washer/gorilla tape grommets add another few ounces, but this is absolutely the lightest shelter I've ever used, not to mention about the cheapest, and it is amazingly compact. 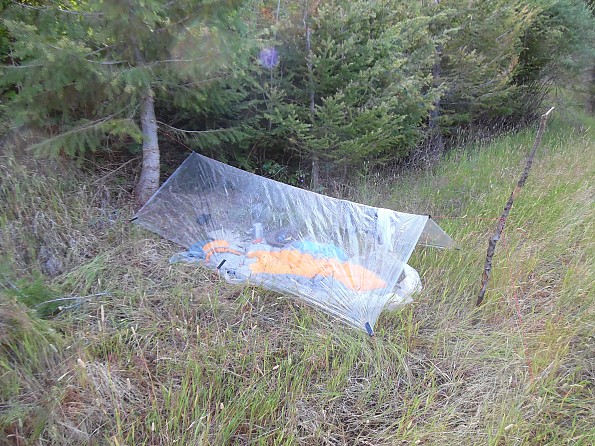 Closeup view under the edge one morning. Rain all night, but i was dry as a bone. 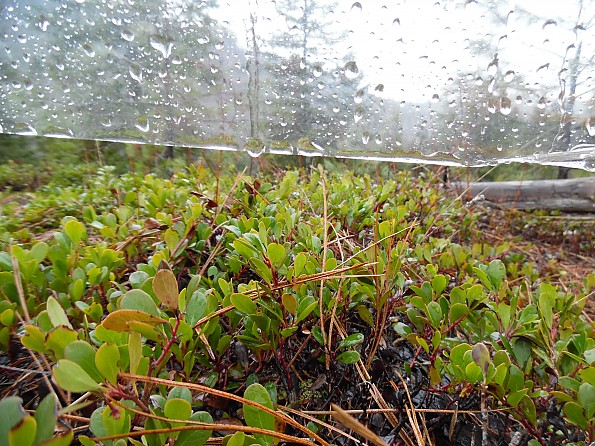 Call me crazy, but I'm getting awful fond of my little transparent tarps. I love to be able to stretch out and gaze at the starts at night, and see the new day as dawn breaks.