I was minding my own business when a windstorm came in and started making the trees creak. As I sat next to my campfire I heard a snap, pop and I watched a big green pine slow make its descent to earth 50 feet away. I was in the middle of a meadow surrounded by aspens and pines and thought I'd be ok.

I went off for a little hike and came back to find a large aspen toppled over pointing away from my tent. Had the wind blown in a different direction I'd not have a tent. The ground was a bit soggy from all the snow melt so I guess that made the wind a bit more effective at knocking over the trees. The wind then calmed down and I was treated to snow and rain with a claps of thunder for the night.

I thought I was in a safe place no dead trees around, but it looks like you always have to think in the backcountry, “How would this kill me,” anytime you set up your tent.

Amen to that brother! been there did that lived to tell the tail

I thought I was in a safe place no dead trees around, but it looks like you always have to think in the backcountry, “How would this kill me,” anytime you set up your tent.

I have been in similar situations when in the backcountry. Sometimes you just have to hope for the best I would say. I have seen green trees pine & hardwood as well as dead trees pine & hardwood come down in some not so strong winds but then you have think how strong is that wind at the tree top level or at least 25 foot off the ground.

Good reminder to us all, C4B7. Knowing the weather and which way the wind (usually) blows is a good skill to have any time, but a definite necessity in the backcountry.

Yeah, I had a similar situation a few years back too, though it didn't involve my tent. I was hiking in the John Muir Wilderness, and hear a huge crash behind me. I thought it was human generated.

On my return down the same trail later on, I found a huge tree had fallen across the trail, just minutes after I'd walked thru that same spot...

Really makes you think twice about where you make your home for the night while out there. I know ill keep this little tale in mind next trip. Being aware of your surroundings, knowing the terrain, and knowing the expected conditions (and learning to read them) is all too key in being prepared for an outing.

There is a danger much more common than falling trees or tree limbs. I remember camping late one summer amid a grove of sugar pines. It was a sultry hot, still, day. I was dozing in my e-z rest chair, when I was startled by the thump sound from something of considerable mass. I looked around but at first saw nothing that could explain the sound. Five minutes latter, thump, again! Again I failed to find an explanation for the sound. When the third thump happened a few minutes later, I was looking to see if my friends were pranking me. Then ten feet in front of me a very large pine cone plummeted to the ground. Thump! Had one of these cones landed on a person, it would definitely crack their scalp open, possibly fracture their skull or cause a neck injury. The cones continued to bomb down for the duration of our stay there, and I was very ill at ease whenever I had to venture under those trees.

One more reason why you should avoid camping under certain trees.
Ed

The never-ending question of death-by-tree is always out there and despite close calls, never fully answered(thank god). Limbs fall, green trees fall, dead trees fall, wind brings 'em down, sometimes nothing brings them down except time and chance.

One time at the Swamp Site I was in my old NF tent and a huge side limb fell at night 10 feet from my tent. T Rex comes to camp with me. Shudder #1. Another time I was atop Marys Rock in the Shenandoah in '87 during a March windstorm and a dead snag fell atop my NF knock-off Windy Pass VE25 and ripped the fly and broke a pole. The thing is, I just stepped out to do some yoga stretching exercises. Saved by yoga.

The below fotog shows a primo campsite and a place where I used to put my tent, now obliterated by a big oak tree. Had I been there when the thing fell . . . . . . 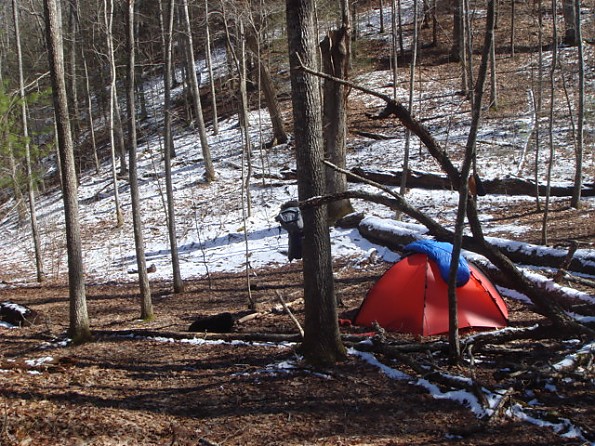 Remarkable how you'll see areas where trees are growing out of rocks with only the barest evidence of soil, and in other places in a rich forest with presumably thicker soil, huge trees will be toppled.

Scariest representation of the potential of trees to fall is in old-growth redwoods -- these immense trees, 12 to 15 feet across and 300 feet long, seem to fall forever, leaving root balls over 20 feet high.

I was wandering around a campground in one of the Bay Area county parks one day and noticed a 200-footer had fallen right through the middle of a campsite. Would've crushed an RV like a coke can.

Forests have thousands of trees, of which only a few actually fall, with a path determined by vagaries of wind and weather. The likelihood of being in harm's way when one of them comes down is actually quite small, statistically, but people do get hit by lightning and win lottery jackpots.