melitta filter with your favorite brand of drip grind coffee. melitta is the only way to go.

Make your own coffee... by pan roasting the green seed which has become more commonly available over the counter in recent years. I usually roast to what may be considered Full City Roast or well into the second crack though depending on the bean am willing to go anywhere from first crack to Viennese, and sometimes even venture into full carmelization for an espresso (strictly for use at the domicile). Pan roasting is an outdoor endeavor which is usaually done before a trip on the patio or lanai especially if lacking a strong ventilation system at home. I'd rarely pan roast on a short trip unless planning to give a demonstration of the process.

On the trail brewing methods vary from cold brewing to pour over or even an Aeropress for a decent americano. Occasionaly fine grind for Turkish style but not beyond roughing it and going cowboy (filter through the teeth) if I'm especially lazy.

I rather enjoy using the Aeropress and the Porlex Mini ceramic grinder which (partially disassembled) conveniently fits into the piston handle of the funny looking coffee press (...not my bag baby!) both are worthy items for testing.

I make mud. I use the tea bag type packs and drink it black. I can be a "connoisseur" @ home(my wife wants a Keurig Vue f/her bday.)

On trail I am just trying to wake up and the sludge I brew does it.

Gotta have my "go-go" juice. 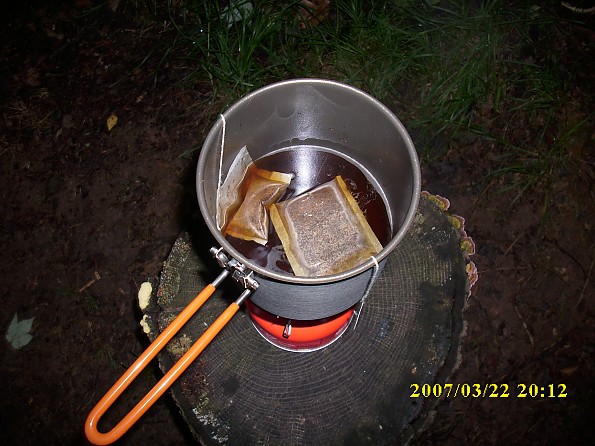 only use my press 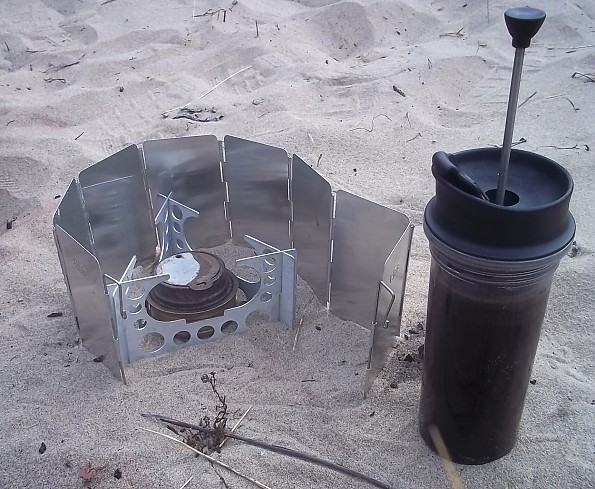 Take a handful of quality arabica beans out of your pocket, wrap in a bandana and crush with a rock.  Heat water in any vessel to boiling with a small handful of beans per cup.  Take off the fire, add a small amount of cold water to settle the grounds and enjoy.  Everything else is just ritual in my opinion.

As for all the popular coffee lingo, here is a story from Italy.  I went into a stand-up one morning in Tuscany and ordered a "latte."  "Caldo?" the lady asked.  "Si" I replied.  You guessed it, a cup of warm milk.

Great story ppine! I'm not above chewing beans myself, and often make a "Turkish-style" cowboy coffee by re-boiling a few times. I've always wanted to take a little MOKA-pot-style espresso maker on the trail, but it never finds its way into my pack.....

Yes, Latte directly translated is "milk." If you want to accurately order what is referred to in common English vernacular as a "latte,"  you would need to order a "cafe latte." Meaning, literally, coffee and milk. The exact preparation varies, but is fairly typically uniform in most developed countries.

It is understandable that in English usage "Cafe" was dropped from "caffe latte," as in an Eglish speaking "latte" is only used for designate a prepared coffee drink. Such colloquial norms happen in every culture when foreign words and usage are adopted.

Though I definitely agree, some do adopt particular coffee rituals for status or image reasons, that is not necessarily the case for everyone.  Different preparation returns different results and taste. Fried eggs do not taste the same as scrambled, and neither the same as poached or boiled. The same is true of the various methods for coffee. I don't feel the urge, though, to make a lengthy explanation of the chemistry and physical reasons each process results is in particular properties ;)

All that said, while backpacking I will drink most anything as long as it isn't TOO bad. I often just take Via.  Steep brewing with a fresh, coarse-ish ground(or crushed), medium to dark roast is usually quite good.  Method of separation is optional :)

I used to drink that coffee bag coffee...what crap! you gotta be hard up to call that stuff coffee...

Starbucks Via and I have a good ol' fashioned percolator for car camping.

I already reviewed this but the H2JO is the deal for me:

Now if only I could find the thing!  Kids got into the gear and now its gone.  No telling what they used it for.

To me though, coffee on the trail is a tool; used to get me to point B faster.  I abstain for a few weeks prior climbing season, making it work better when I use it.

I use an aluminum coffee percolator and grind fresh beans before the trip. I also cook meals in the pot of the percolator. So it's not too much to carry.

I have an aluminum percolator...perked coffee one time...didn't turn out too good. now I use it to boil water for my melitta on car camping trips. its a lot easier to just boil water and pour vs. perking.

It is amazing to me that people will cut the handle off a toothbrush, but insist on bringing their coffee contraptions.

my toothbrush is full sized, thank you...but I see your point. we'll do anything for coffee!

I have an insulated double-wall stainless steel coffee press that I love. Can't remember the brand, bought at MEC years ago. It is, however, a bit heavy. Recently someone made me Nescafe's new 'Mellow Roast' instant coffee, and I was really surprised how good it was. (They've also introduced a Dark Roast -- stay away from that, though, even if, or especially if, you like dark roast coffee. Acidic, you could clean rust with it I think.)

But I don't mind instant coffee, as long as I'm outdoors, because it has such a nostalgic childhood-camping connection. The smell of it takes me right back. Just like those green mosquito coils...

Starbucks VIA - French roast, with a little bit of raw sugar added.

ditto on the Starbucks Via

seems like there's alot of via fans out there...I'll have to try it.

I have a folding toothbrush.

Otherwise, I go cowboy...coarse ground (or crushed) beans go into cold water, are stirred with a stick--always with a stick--and then brought to a boil. Let cool untouched for a few minutes and the muck settles, then sip until you're more eating than drinking.

you can use the stick to pick the coffee beans out of your teeth.

here's another question- what do you do with your coffee grinds, bury them or pack them out? I pack mine.

Adding cold water at the end settles the grounds.  There is no picking of grounds from your teeth.  People have made coffee this way for hundreds (thousands?) of years.

I gave up on trail coffee until I found Via.  Messing with regular grounds is too much hassle.  In town I drink 1-2 pots/day so this is saying something.

Of course coffee is about more than the drug delivery (at least for me!), but has anyone tried something like the AeroShot ?

I take a French Press with local fresh ground medium roast. I pack my coffee in the Press so it takes up less space. I tried the Via and don't care for it. I enjoy the full body taste and actually brewing my own. Something about being in the woods and having a "real" cup of joe. I remember getting instant coffee in my MRE, we use to pour the pack in our mouth and chase it with cold water. Now that's a drink that will get you going.

Trader Joe's has an instant coffee pack with sugar and creme added to it I prefer over the Via's from Starbucks...they are also considerably cheaper.  Asian supermarkets also have many varieties of instant coffee in packets.  Lately, I've been doing a TJ's coffee packet with a packet of hot cocoa to make a mocha.  Delicious!

My addiction wants to carry the French press. My experience has steered me away from the Melita after dumping it over in camp, much to my horror and dismay. My sanity now comes in an acceptable trail use Italian roast via. It makes a decent brew, and for the weight\mess/convenience factor, I won't do anything else.

It is amazing to me that people will cut the handle off a toothbrush, but insist on bringing their coffee contraptions.

No doubt, lol. Coffee is the one thing I cannot butch it can wash down some horrid backpacking meals. French press with ground beans all the way.

My own ground coffee in little cloth drawstring tea bags is my 1st choice.

"BIGBUCKS" VIA is my 2nd choice.

Don't like coffee unless it is liberally dosed with bourbon, which by the way is an excellent breakfast drink.

Another vote for the Starbucks VIA.  It's the only instant coffee I've ever had that actually tastes like real coffee and they are absolutely perfect for backcountry use.