I have been drooling over the Caldera Cone stove systems for a while and am thinking about building my own.  I will probably make the first few (as needed) out of Aluminum flashing to refine my design and ability to build it.

But for the final model I want to be able to burn wood in addition to the alcohol stove.  This would GREATLY reduce the amount of fuel I would need to carry on long trips.   So for the final it has to be something stronger and tougher then the aluminum.  I can get both stainless steel foil and titanium foil.  I THINK both would work, but am not really sure, this stuff is thin! .oo5 or .004, I am not talking about big fires, just small twigs to heat food and boil water.

Does anyone have an opinion on either product?   Titanium is a lot more expensive per area, but it seems that I can get it in smaller amounts so the final cost of the materials may not be that different.  Not really sure yet on that though.

Not sure just yet what else I would need or how hard this thin of materials is to work with, although it seems rather easy from YouTube videos.

Well, I work as a cook and our stove double boiler soup pots (Bain Maries) are rather thin and often boil dry yet never burn through. Not sure how thin .005 is but these pans are about 1/8th inch thick.

I have used small soup cans as wood stoves and the larger #10 cans we get stuff in at work as wood stoves. I take either can and use a church key can opener like beer cans used to be opened with and make four holes around the bottom and top sides of the can at 12,3,6 and 9 o'clock spaces. Then just put wood or self lighting briquettes into it a cook on the top.

I also used to hike with a guy who took a large can like the #10 soup can and cut a hole in one side, then inverted it over a fire and cooked on it.

Even saw in an old miners camp (in the Grand Canyon) where they took a old wash tub and cut a hole on one side and a hole in the bottom and inverted it over a campfire and used coffee cans stacked inside each other for a stove pipe. They and my friends stove above just added more wood thru the side hole.

Good luck with this project! :)

titanium doesn't heat evenly, but cools quickly. at those thicknesses you may have a problem with buckling. good luck!

Steel soup cans don't buckle I have used mine for years.

I guess a little clarification is in order.  So this is my current set up, as of last Friday. 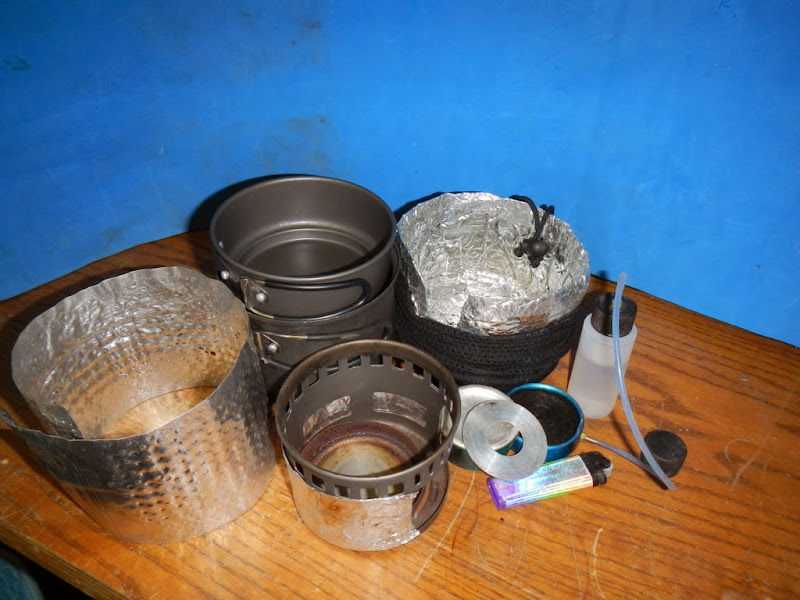 I use a Esbit pot and lid and base with a custom bud lite bottle stove and a aluminum wind screen.  The whole kit is 15.1 oz.  Not the lightest but still fairly light.

I am prepping for a thru hike next summer, 1200 miles or so on the Pacific Northwest trail.  Normally I would just bring alcohol on my local trips, but for this trip there will be a few times that resupply is between 9 and 11 days.  My thought was that if the cone could handle small fires, twigs and the like, then I would not have to carry as much fuel and would have a back up in-case I ran low, or out, of alcohol.  Having drooled over the titanium Caldera Cone set ups I thought about making my own after looking at some YouTube Vids.

On Saturday I made this, my first copy of a cone.  It is made with Aluminum flashing and is strong, but thick and heavy.  I can roll it up but a thinner material would be a lot better.  What I found funny was that using the Cone and removing the base and wind screen gave me the exact same weight.  15.1 oz, and the cook times where with in a few seconds of each other at 6:30 sec for 2 cups of water. 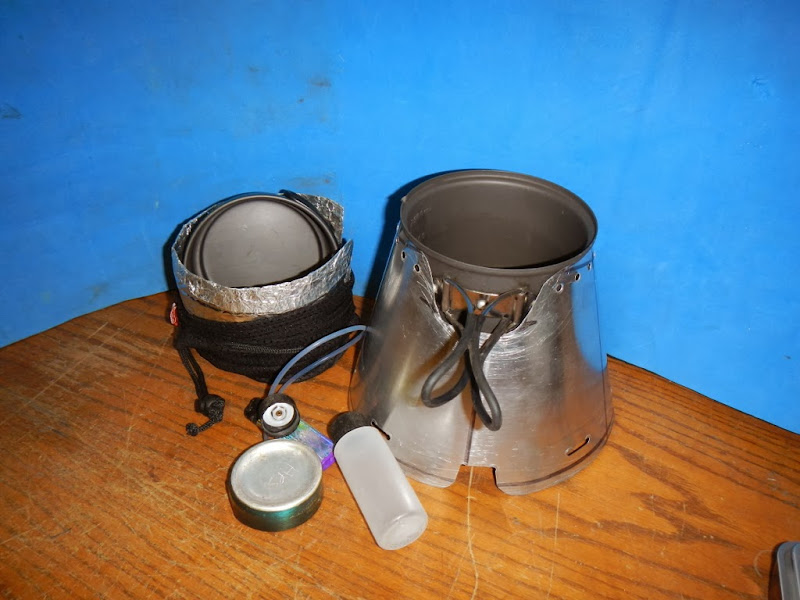 So Gary first;  1/8" is .125 if my math is right, .005 is like thick printer paper, the good stuff, but not quite card stock.  I have a wood burning soup can stove that is based on the gassification method, it works OK, but I want something that will work as a wood burner or a alcohol stove wind screen / pot stand.  That is the reason I have been looking at the cone shape.  Weight is probably the biggest factor for me in this stove design / build, the other being cost.  Of course it has to be able to do what I want too. :)  Given that the steel can stoves are out.

Trailjester, even heating is a non issue, if fact if there was something light and completely heat resistance that would be great!  The foil is rather flimsy and very flexible, but when formed into a cone it is surprising strong and stable, at least according to YouTube and several manufactures.  So I am not to worried about that, although you do have to be careful with this stuff.  And sand the edges, a sharp edge with slice through skin like a hot knife in soft county crock! :)

Now Back to my original question: Stainless Steel or Titanium?  OR Aluminum?

Several places have the Titanium foil that I can order, Titanium Goat being one, like the other suppliers this is not exactly cheep, but for the quantity I am talking it is not that much either.  I though I might be able to find it locally but no luck so far.

Stainless Steel foil I can get locally, in 6" x 60" rolls in several thicknesses.  It is called shim material.  6" wide would work as I would make it a two part cone so I could roll it up in the pot, which is about 4" high.

I don't think the aluminum would last burning wood in side of the cone, wood fires can easily reach about 1500 degrees (not really sure about little fires), although I don't know the melting temp of aluminum off the top of my head, I am sure it is close to 2000 degrees, not a lot of wiggle room.  I also know the titanium would be lighter and I think the SS would be lighter also, the difference in thickness is like paper to cereal box cardboard.

I have no idea what SS or Ti will handle in temps, but I know that both of these kinds of products are made into wood stoves which would have to handle a much higher temp.  So I am fairly sure both could handle what I want to do.

I guess I was thinking if someone had experience with the stainless steel,  as I think it would be easier to work with and cheaper to get.  Thus reducing the cost of this project.  I know the Titanium is going to be the lightest, I just don't know about cost.  So I guess I need to figure that out.  And test some aluminum flashing to see if it works and / or lasts.

Other issues, regarding material selection:

Whatever material you select, roll those cut edges.  Blunting the edges with sand paper or a file will make them less hazardous, but under some circumstances you still can get cut, given the material thickness; furthermore casual use can cause the edges to nick up and create sharps along the edge.

If you plan to create any sharp folds in the sheet metal, some materials are much better suited than others.  I tried making wind screens from aluminum roof flashing but found the metal would work harden and crack along the folded bend.  I question titanium’s workability too.  I don’t recall having seen any forged Ti products, leading me to believe Ti also may work brittle if folded into sharp bends.

I found the thick gage disposable aluminum foil catering trays you get in the bake section of the grocery store to make good material for wind screens.  It isn’t too heavy, and tolerates well being folded and worked into shape.  But my wind screens were for white gas and canister stoves, thus I do not know if this approach is suitable for the heat conditions created by a cone stove.  Stainless steel is perhaps the best material choice, as it is strong, has a high melt point, and accepts being worked without weakening, but it is also pretty heavy.