Has Anybody Dehydrated This? (Other Breakfast Ideas Too)

I have had great success in the past with most things that I've dehydrated, usually I make extra portions when cooking, and throw whatever I'm making into the food dehydrator.

I tend to keep things super simple for breakfast; typically instant coffee and oatmeal with a handful of GORP thrown in. What I'm planning on experimenting: Making French Toast, with butter and Maple syrup added. Has anybody done this?

I've tested things like Mac & Cheese (with dairy/butter) and put it on the shelf for over six months, and it has turned out perfect. I've been getting bored with tried & true oatmeal/grits/etc. and wonder what other people are doing. No offense, but dehydrated/freeze-dried eggs are still too much for me!

Oh man.  Breakfast for us is always the same ritual.  We experiment with all kinds of stuff for lunches and dinners, but b'fast is instant oatmeal (maple/brown sugar) with a handful of walnuts or pecans added, plus hot cocoa (Via for my wife who needs her caffeine) and some dried fruit.  Easy, relatively quick, very light, very dependable.

Similar habits for me as well...Via coffee to get going and oatmeal. I like prepare ziplocs of quick oatmeal, not instant which I don't really like for some reason...probably the sugar but it doesn't really taste or look like oatmeal. Usually add dried cranberries to mine to satisfy the tart not sweet tooth. Basically boil some water, pour a cup of coffee then add the oatmeal cranberry mid to cook for a minute or two. Only one quick dish to clean and I am on the trail.

Dehydrate lots of lunch, snacks, and dinners, but never found something I really like for breaking the fast.

This time of year I go with granola or grape nuts with Nido in a FB. I can eat and get moving as soon as I finish my coffee.

In the winter when I'm usually in no hurry and want a hot breakfast I'll use two pouches of cream of wheat with a packet of cocoa to get the furnace fueled up.

This time of year I go with granola or grape nuts with Nido in a FB. I can eat and get moving as soon as I finish my coffee.

In the winter when I'm usually in no hurry and want a hot breakfast I'll use two pouches of cream of wheat with a packet of cocoa to get the furnace fueled up.

Yep, i will take cream of wheat or grits over oatmeal any day. I will eat oatmeal if done right with added ingredients to liven it up though. Where i live a brunch or lunch with Shrimp, Cheese, and grits is very popular and i have learned to make it in the woods, i would love to try dehydrating that one this winter!

Sean, I love granola, Grape Nuts, Bear Naked, and other brands especially when served warm with fruit in the winter.

I generally like english muffins or biscuits over pancakes, but so far have just been carrying in dry ingredients and baking biscuits in camp.

So...my point being that most of my breakfast meals are made with dry ingredients to start with, however the idea of dehyhydrating french toast with syrup is an interesting one!!

I also agree about the dehydrated eggs, i think you can get used to them, at least i can. After a few days of eating granola it is an alternative, but having a couple fresh eggs makes me remember how bad the freeze dried eggs are.

My only other thought on dehydrating food for breakfast would be a nice veggie omelet, if doable, and edible, that would be awesome for me!!

French toast is as easy to make in the outdoors as pancakes. I usually cook on flat rocks and stone not carrying a frying pan. Its best to use something hardy like bacon to keep what ever breakfast item you are cooking from sticking to the rock.

Usually I make just a toast,egg and cheese breakfast with bacon.  Take the rock, flat one and place it in the coals,heat. Then when droplets of water sizzle on it, place an X of bacon on the rock, then take the bread and place this over the center of the bacon X, then break an egg immediately (while the bread is still moist) onto it and place a slice of cheese onto the egg once it finishes frying.

French toast could be made the same way whereas the egg its soaked in would cook it as it does on a griddle at home or in a frying pan. The bacon in either case keeps the whole thing from sticking to the rock!

But are you talking about dehydrating soaked french toast with butter and syrup? That could be a challenge!? Good luck!

The wheels are turning, thanks for the input so far! I think I am also going to experiment with pancakes, omelettes, and who knows what else?

In efforts to save time & reduce weight, I have found cooking at home/dehydration works best for me in conjunction with a supercat-style alcohol stove.

Look forward to hearing your results.

Here is a helpful link. http://www.hungryhammockhanger.com/index.html

Eggs are really hard to get right, but the pancakes would probably work a lot like dehydrating chocolate cake...keep the pieces small and rehydrate gently to avoid getting too soggy.

Totally agree about the benefits of making your own meals. Eating what you want in portions that make sense for your individual needs combined with the weight and effort savings is hard to beat.

I've had the dehydrator running all morning Sean, but pasta and beef, no breakfasts. When I went to bag up some meals for my last trip I was shocked to see I'd gone through most of my supplies already. Need to dry some shrimp tomorrow to go with the lobster marinara and I'll be ready to head out once the holiday weekend crowds go home.

I don't so traditional French toast, but you get a similar taste using coconut oil and cinnamon raisin bread (pan fry).

I am historically a boring breakfast guy (sticking to the KISS method) but this thread has inspired me to try a couple of things out on my next trip. I use the Caldera Ti Tri for rehydrating my meals...alcohol or wood burning mode both work great to really let it simmer and fully rehydrate. Wood burning is my favorite for obvious ounce saving reasons.

With my boys moved on to college and boarding school this year, the dehydrator is running a lot more than it used to...I have rediscovered this thing called "leftovers" that were unknown to me when we had two cross country running teenagers in the house. Now we are eating a meal for a couple of days and when we get tired of it I am dehydrating the rest for future trips. Will be adding breakfasts to that list soon and will let you all know of the successes and failures. Not being as much of a sweet tooth, my first attempt will be an omelette.

"With my boys moved on to college and boarding school this year, the dehydrator is running a lot more than it used to...I have rediscovered this thing called "leftovers" that were unknown to me when we had two cross country running teenagers in the house. "

My son has left home too, that boy could eat the back out of the refrigerator.

You are right, I have a much smaller grocery bill now. Miss my son though.

Right there with you...miss them greatly but hopefully will get time to distract from that with a few trips this fall.

I am making a skillet breakfast this weekend with diced potatoes, peppers, onions, bacon, and egg...thinking of doubling the recipe and dehydrating it for a short trip next weekend.

If you freezer bag cook try adding a scoop of vanilla protein powder and a scoop of Nido to your oatmeal in the zip lock bag. Makes it so much tastier, plus adds some protein and fat to the meal

Seems like oatmeal is the choice of breakfast for most of you.  I on the other hand, am not a big fan (prefer my oats dried and crunchy, not Mushy).  Aside from that we prefer a big hearty breakfast to start our day with.  Living in Canada we experience a much colder morning ritual than many of you from the States, so we appreciate a high caloric large meal to warm us up and get us going.  Waking up to snow in the middle of summer in the Rocky Mountains is a possibility anytime during the summer months.  For us, we usually have sausage and potatoes with an occasional egg to go along with it.
To start with, when we go back country camping we carefully plan our trip by choosing an area to pitch our tent that will allow for different day hikes starting from our base camp.  This way we are not packing up every morning and moving on to a new campsite at the end of each day.  This allows for a more leisurely breakfast experience on our part.

I started experimenting with dehydrating our own food a few years ago with great success.  Now we have a couple staples.  Our favourite is dehydrated breakfast sausage and potatoes.  I cook up the sausage in a fry pan, breaking it up into small pieces as it is cooking.  Drain the oil very well (lots of paper towel) and put it in the dehydrator until you have crispy bits.  The potatoes we put through the food processor by shredding, we then blanche them for 4 minutes and dry them with towels then place into the dehydrator until crispy.  I bag them with some parsley, dried chives and dehydratd onion.  We put them in our billy pot in the morning with boiling water and let it simmer over the fire until re hydrated to our liking.  Instant delicious hash!  On occasion we carry along a few fresh eggs to spoil ourselves.  Worth the extra hassle believe me!

Our second breakfast choice is pancakes with a homemade fruit compote topping.  I dehydrate fruit (blueberries, strawberries, peaches) whatever you like.  Bag that up, have a separate small baggy with a little sugar, cinnamon and cornstarch.  I add boiling water to the fruit in the billy pot, let that simmer for a short time then add the bag of dried sugar ingredients.  Use pancake mix that only needs water added and cook those on a small fry pan or rock and voila delicious breakfast!

Hope this helps to give you some new ideas for breakfast while you are out there having fun! 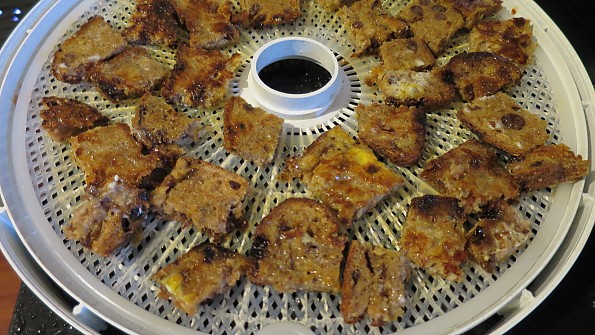 I have not rehydrated, but it looks like this should work...

Cinnamon Raison French Toast, with butter and Maple Syrup added before dehydrating. I'm heading up to Maine tomorrow night, and sometime during the trip I'll be giving it a shot. Perhaps Lone Stranger can give me a review after he (hopefully?) tries some...

You are brave to take things into the woods you haven't tried at home first Sean. I think I'll let you try a few bites first before I commit to anything :p

Heh, I like to live dangerously... It's the scrambled eggs that I dehydrated that I'm really afraid of!