WANTED: Manual for a Great Basin Tent by Quest

I located this tent at an Estate Sale a month ago. I have been camping all my life and somehow this tent assembly has stumped me. Tried for hours to put this tent up and no luck. Has two 140 degree angle clamps on the top of the tent that i've never seen before. Pole fits in each end. I'm not even sure I have the right poles.

I've searched everwhere on-line for this tent and I've had no luck. North Pole Lmt is no longer in business and Trailspace does not provide manuals for tents prior to 2006.

Here is the little info I could pull from the tent I have:

Silver and Blue in color

Great Basin by Quest on the tag inside the Tent.

Model #'s listed on the Blue storage bag are:

Even a picture of this tent already set up would help me out.

I googled it. There is a review on this site for that tent. I found a picture of one for sale on berlin's craiglist. I cant seem to get the pic to load on here.

Trailspace does not provide manuals for tents prior to 2006.

Trailspace does not make, sell, or service any of the products that are reviewed or featured on this website.

Now with that being said I am willing to help you in anyway I can in regards to getting you dialed into the setup of the tent.

Is the tent in any way shape or form similar to the Wenzel Great Basin(as seen in the link/photo below?) 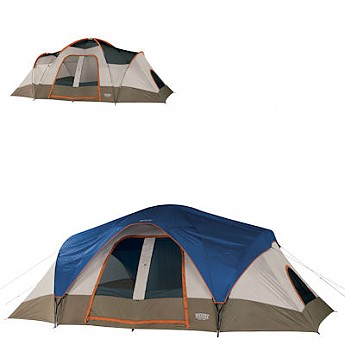 Thank you for the Replies!

To Rick: the Wenzel one is similar in shape but it's constructed different. The doors are on either end instead of the sides and the windows are on the sides. Only has one pole sleave on one end over a door, the remaining pole guides are loops and clips. Also on this tent it has two 140 degree black plastic pole inserts. one in the middle and one over the other door. I've never seen those on a tent before.

The reviews of this tent on this site do not have pictures :-(

To Hotdogman: Thank you I will search berlins site for a picture.

I snapped a few pictures of the tent I have when I was attempting to set it up in the back yard. I will upload them on here shortly.

Good deal. If ya fire up the photos I am fairly certain that we can get ya situated in regards to the setup of this tent.

This set up I did was the worst one but was end of my daylight and had to take it back down. just snapped a few pics to see shape/size. I know this setup can't be right. 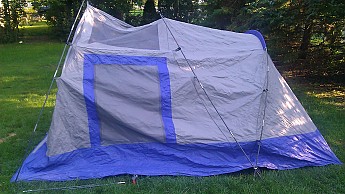 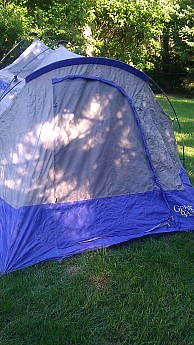 sorry these pictures are not better. I can take more if you need to see anything close up

Is it possible that you have the 1st & 2nd poles mixed up? It is kinda hard to tell by the photo but I am wondering if the poles are set longest to shortest.

Plus pulling the tent taut and staking out the floor area(4 corners) may make things somewhat easier to figure out.

I did try that. It left the front of the tent sagging. the poles they gave me had the strings cut so I tried a number of different amount of poles in each loop.

Topic: WANTED: Manual for a Great Basin Tent by Quest