I have a large Jansport D2 external frame backpack for sale. I bought it from another member ppine here last spring. Its in tip top new condition, reddish brown /orange in color (see image) Asking $50. No tears,holes or damage.

Has two large side pockets, two lower smaller side pockets, a map pocket behind the top, a large main opening and a good sized bottom back pocket. Has the old style leather grommet gear strap holders top and bottom, a ice axe loop and strap and a crampon patch strap area on the lower back.

Comes with spare parts as well. Aluminum frame,waist belt and shoulder straps are gold in color. Has two U shaped wings at the side on the waist making it stand up as picture below by it self even when fully loaded. 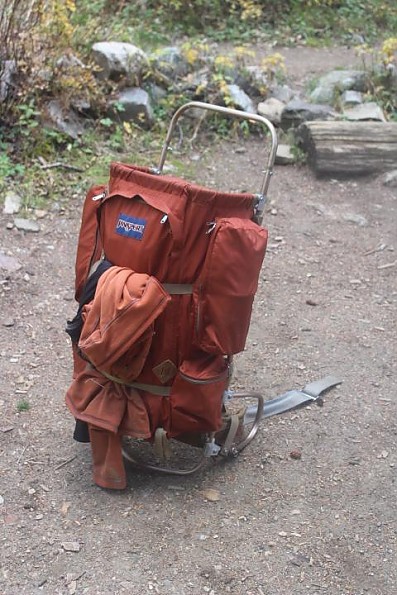 Picture shows it Tuesday after I took it backpacking in the Tetons. Can include more pictures if any interest shows from you.

Those are good packs, almost as good as a Kelty, but I have never owned one, and never sold you one Gary.

I am a fan of the old Kelty Tioga. I have a later edition of one from maybe the 1980s or early 1990s. It has a closure at the top of the pack bag. I removed the divider with a razor blade so that it is just one big compartment. I like the pockets for organization, and the airflow on the back in warm weather. There is plenty of room for emergencies in case you have to carry some one else's gear.

Purchased from Pine Sap. Glad to you got out with it Gary. How did it carry for you?