Last night, Barbara and I went out to Sunrise Mountaineering to see a talk by the legendary Fred Beckey - 88 yo, still climbing hard. I have known Fred for a couple decades. I have climbed a number of his first ascent routes, though I have never climbed with him. The majority of his climbs have been in North America. His 3-volume guidebook to the Cascades is the classic example of what a guidebook should be.

The photo below is of me on the left (in Trailspace cap), E.C. Joe (middle, my partner in BSA Climbing Instructor courses, and responsible for a number of first ascents in the Sierra backcountry), and Beckey on the right. [corrected the order - hey, from my point of view, I was on the right and Fred was on the left] 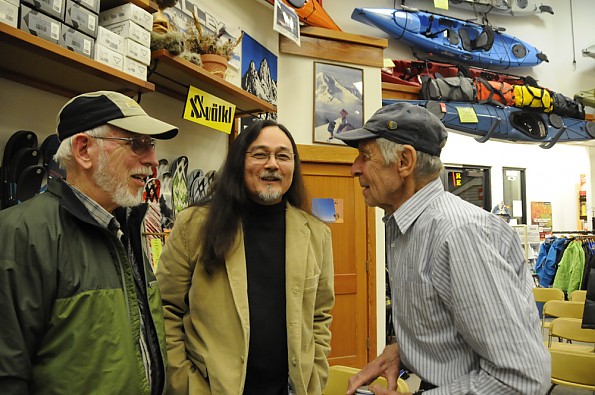 Sunrise is one of the two remaining specialty climbing shops in the SF Bay Area, with a major sideline in kayaks (note the kayaks on the wall in the background). Sunrise is turning to "The Dark Side" and going on line in the next couple of months for ordering (they already have a website). As Kim (co-owner with his brother) said, ya do what ya have to to stay solvent in this day and age.

Speaking of solvency, The American Alpine Club is sponsoring a project to make a film about Fred. Here is some information about the film project and how you can help by donating to the video project.

Actually Bill, that looks like you on the left.  I was out at Sunrise a few years, if I remember right. It was out in Livermore, I remember driving there from Orinda. Nice shop.

Bill....are you familiar with teh event 24 hours of Horseshoe Hell in Kansas?

I corrected the order. But from my point of view, I was on the right, with Eddie and Fred on my left {8=>O}

Sunrise used to have 2 shops, with the other being out in the Concord area, not far from Orinda. The present, original, continuing shop is in Livermore at the joining of First and Railroad, close by the Livermore train station.

That's Arkansas, not Kansas (although some people, like my mother from Missouri, bless her dear departed soul, insist on pronouncing it "ar-KAN'-sus", instead of AR'-kin-saw, which is closer to the Arkie pronounciation).

No, I am not familiar with the competition, although I am familiar with the area. Jasper and Petit Jean are in the NW corner of Arkansas are one of the two closest real rock climbing areas to Jackson, MS, where I was a university professor and department head for 10 years. Petit Jean State Park has the advantage of having a small airport, to which we could fly our plane from Jackson in 3 or 4 hours, and a nice campground. Jasper, about 60 miles or so due north of Petit Jean, required a bit of a drive. Both have great rock to climb on, and in the 1970-80 period, virtually no climbing activity. The rock is actually a bit outside Jasper itself, but that's the closest to anything like a town. So I'm not surprised that there is a now 10-year-old competition at Jasper. Competitive climbing in the US isn't a lot older than that, maybe 20 years since it became fairly big?

Since the competition is on a ranch (private property), I suspect I didn't actually climb on the rock that was used in the competition. But, like I said, there is some great rock in the area.

We have a couple tales to tell about Petit Jean, but I will save them for a thread more on topic if it comes around - involves a former governor of Arkansas (no, not THAT former governor!).

I hope you start your memoirs at some point.You have done alot also I'd love to read some of your adventures besides what you share to us..

Sorry. I know that but mixed it up with where my friend who competes there is from. He is 61 now and still going strong in it. He moved out here to Vegas to be near Red Rock. Dick Dower is his name, on the SLIGHT chance you may have run into him over the years. Hard to find him on the ground, ever.

I hope you start your memoirs at some point.You have done alot also I'd love to read some of your adventures besides what you share to us..

Yeah, Glenn Denny, who has written and illustrated a few books keeps telling me that. He also says that all I have to do is start writing, Once you start, the rest comes easily - to which I say "balderdash!!!" Oh, plus the minor point about getting a good editor.

Oh, plus the minor point about getting a good editor.

Fred Beckey, wow. As a Cascades guy you can't climb without hearing of Beckey. Who is next, that guy from the Dos Equis commercial?

Fred Beckey, wow. As a Cascades guy you can't climb without hearing of Beckey. Who is next, that guy from the Dos Equis commercial?

Here we have OBGO with THE most interesting man in the world, Tipi Walters, chilling with their entourage.

"I don't always post on online forums, but when I do, I prefer Trailspace."