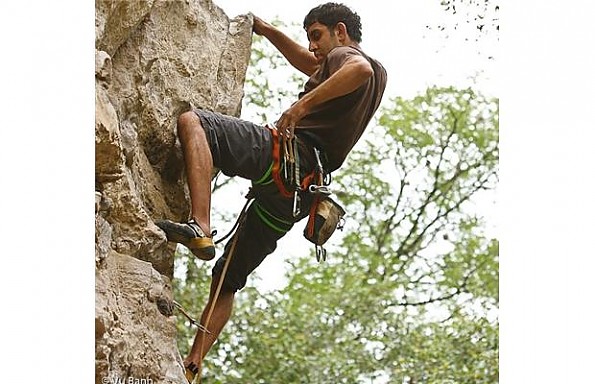 CALGARY — A Calgary man who died Sunday in a rock climbing accident was an elite, able-bodied athlete who excelled in wheelchair basketball and was known for his “big heart.”

Ranjit Sidhu, 31, and his 25-year-old climbing partner were rappelling down a steep wall on the west side of Heart Mountain Creek when something caused the pair to tumble nearly 100 metres to the ground.

Climbing gear found strewn across the ground and a photo of the two climbers taken moments before their death led Kananaskis investigators to conclude the climbers suffered a sudden accident shortly before 1 p.m. as they made their way down the rock face.

Bal Ravi Sull, Sidhu’s older sister, told friends on Facebook that the family “was hoping against hope” that the climber reported dead in the news wasn’t her brother.

“Our hearts are broken knowing that you are never coming home,” Sull told friends.

The kinesiology graduate was a conscientious climber, according to friends.

“He would have been very safety conscious with his climbing. I’ve seen that in other things he does,” said Martin Hoare, a friend and wheelchair basketball teammate of Sidhu.

Hoare said his longtime friend was a talented athlete who played for Alberta on a provincial wheelchair basketball squad.

“He had a big heart. He was very passionate about life. The kind of guy who would do anything for you,” Hoare said. “He’ll be missed.”

Investigators said they are piecing together the final moments of the two Calgary climbers.

Sidhu and his female climbing partner — whose name has not been released — had just completed a climb of 150 to 180 metres and were preparing to rappel back to the ground.

Using a technique that climbers call “simul-rappelling,” the pair were descending using a rope threaded through a single anchor, each climber acting as a counterweight to the other.

“One person managed to come off the rope during the rappel,” said Kananaskis public safety specialist Mike Koppang.

With no counterweight on the line, there was nothing to keep the rope anchored.

“The rope ran through the anchor and the second person fell.”

Within 15 minutes, the first emergency responders were on the scene.

EMS crews said it was evident both climbers had sustained multiple traumatic injuries in the fall.

Police confirmed Monday that Sidhu was one of the climbers who perished, along with a 25-year-old woman.

The pair were friends and co-workers.

“Really it’s a tragic accident. There was no foul play,” said staff Sgt. Brad Freer with the Canmore RCMP.

Lawrence White, executive director of the Alpine Club of Canada, said accidents such as these “ripple” through the climbing community.

“The climbing community is a tight community. Many climbers will know these people or know people who know them.”

This is the second significant Kananaskis rappelling accident in recent days.

On July 24, a climber who “misrigged” equipment fell 20 metres to the ground at Wasootch Creek, off Highway 40, just south of the Trans-Canada. The climber sustained significant injuries and remains in hospital.

Rappelling is the activity where most climbing accidents happen,  and forgetting to tie that knot at the end is usually the cause. Simul-rappelling is even more dangerous because one person's mistake kills the other person, too.

The dead climber horse gets another beating.

Must be the season for it, FStoS.

It's a shame to see people die so young because of a tiny mistake - hopefully, postings like this one will remind others to pay a bit more attention.

this will not surprise anyone; i think rappel accidents happen, in part, because people see descending as the easy part, and they are tired from climbing up, more likely to make a mistake.  not unlike descending after summiting at high altitude.

I have never heard of simul rapping. It sounds like a bad idea from the get go, especially off a single point. I don't pretend to be an expert, but from the description of the accident, the danger seems to be self-evident. Please correct me if I am wrong.

btw, I see nothing wrong with analyzing accidents or posting comments on them. I would rather learn from someone else's mistakes than make them myself. If you are against such comments, I suggest you contact the AAC and tell them to stop publishing Accidents in North American Mountaineering.

In NZ, the Arthur's Pass Mountaineering site publishes SAR reports, sometimes with pointed comments by the rescuers-here is my favorite--

An inexperienced female tramper "abandoned" by her tramping companions in the Harper River became lost in the Long Creek area. Her companions reported her lost to Arthur's Pass Police late Monday(28-02) evening. A team consisting of Arthur's Pass Rescue and Arthur's Pass Police commenced a foot search of the Lagoon Saddle track at first light discovering the lost tramper in Lagoon Saddle hut. Her condition was that of dehydration because her companions had told her that ALL NZ water needed boiling before consumption [totally untrue], and they had been carrying all the cooking equipment when they abandoned her. We recommended she find new friends!

Tying a knot in the end of the rope is an often overlooked safety measure that can prevent this kind of thing.

It boggles my mind that ANYone would rap on a line that hasn't had an eight tied into the end. At least not in any case where there is any possibility of descending off the rope.

I also think that hearing about and talking through such events is productive. Reading the SAR reports is a real eye opener and highly enlightening.

I have never heard of simul rapping. It sounds like a bad idea from the get go, especially off a single point. I don't pretend to be an expert, but from the description of the accident, the danger seems t

Simul-rapping is normally reserved for a rescue technique. If done correctly, it is quite safe,  though it carries the same risks as any rappelling. Tandem rapping is an alternative, again with the same precautions. As the article that leads off the 2012 issue of ANAM notes, rappelling is the part of climbing that has the largest number of accidents and fatalities of any climbing technique. The proper way to do simul-rapping and tandem rapping are described at length in the two best of the currently available self-rescue books. Before you try it, practice with a highly experienced professional with upper belays on both rappellers, including escape techniques in case of the multiple ways of having things go wrong.

The accident report and description indicate that several basic errors were made in the setup and execution. This is not an appropriate place to give a description of how to carry out a simul-rap or tandem rap. Get proper instruction and practice before you even think of trying it.

Thanks Bill, which books are you referring to? Not that I'm going to be doing any climbing, but they may be of interest to others.

I won't give the book titles here for one simple reason: too many people are under the impression that reading a book or two and/or reading something on the Web qualifies them to do the activity and that they understand the technique. If anyone is interested in learning how to safely do simul-rapping (aka "counterbalance rappel" which should hint at some of the risks involved) and/or tandem rappelling, I strongly suggest that they get professional instruction from an AMGA/IFMGA certified professional guide service that specializes in training. And before anyone even takes that step, they should thoroughly understand proper anchoring on real rock, snow, and ice (not in a gym). There is already too much misinformation and misunderstanding on the Web from people who "read a book" or some website. As the incident in the OP demonstrates, it is all too easy to make a serious or fatal mistake in the absence of real and thorough training.

Thanks for that, Bill. That's also why I nag at people here when they express ill-informed opinions without backing them up with research, facts and experience.

I strongly believe that we have a responsibility to provide only accurate information and the soundest advice. It's too easy for someone to read a post here (or elsewhere on the internet) and figure they know everything they have to know about any topic!

And that can so easily turn into a case of 'the blind leading the blind'.

Bill, fair enough. Some things just can't be learned from a book. That's one reason divers can't get certified unless they take a class from an instructor (I used to be one long ago). If anyone told me they'd learned to dive from a book, I wouldn't get near them and no reputable store would rent them gear or sell them air.

Reading the AAJ about accidents is both saddening and informative. It kept me safe knowing what could happen. Many techniques are safe, if they are learned and practiced scrupulously. I learned to rappel using Herr Dr. Dulfer's method. Never liked it so I quickly changed to newer methods. But for decades, it was the norm...as long as you were careful. Because of the lack of redundancy, rappeling is potentially more dangerous than anything else but rock fall. My thoughts go out to the climber's families.

These accidents are always there to remind us that this activity requires 100% focus and presence of mind. Rattling is I think one of the main reason why these accidents happen. Be safe everyone. Put safety first.

Did you mean 'rappelling', Rodgers?