Remember when ice axes were also your walking stick?

Any idea how old these are? 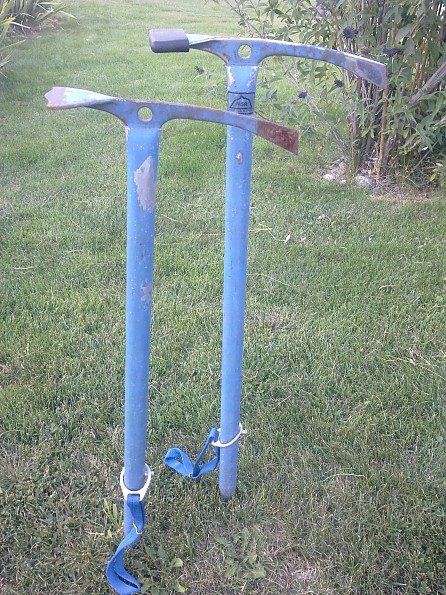 They're for sale for TS members only:

Looks like you have a couple of "Thunderbirds" there. I have a Sumner and Eagle hanging on my wall. I could use a couple of Tbirds to round out my collection... happen to be close to Pullman? 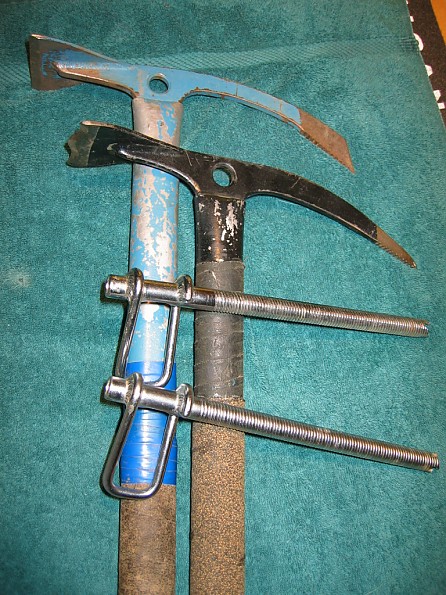 We have Grandpa's ice axe he made in shop class around 1915, his Baker tent and used to have his Coleman stove from 1920.  I frequently use my great uncle's Dutch oven from the 30s, and carry his Model 70 Winchester from 1948.  I use various other knives, match safes, compasses etc. from WWII and before.  I have down sleeping bags from the late 60s.  Just bought a Kelty Tioga from 1973 on eBay.  All of this equipment is wonderful to be around and gives me a sense of connection to my family and to the past.

The Dutch oven is especially prized because it is a 10 inch small enough to go on canoe and pack trips.  It was sunk in a canoe on the bottom of the John Day River in OR in the late 90s, but we found it and I was able to drag it about 40 feet along the bottom tied to a rescue line.

Fly fishing tackle, reels, and rods, dating from around the 1930s handed down from my grandfather.  The oldest gear I personally acquired is a scout pocket knife from the mid 1950s.

I have an old pair of salewa strap-on crampons, an old French made axe, and snow saw and snow shovel, all from the late 1960s.  I still use the crampons, saw, and shovel, as the modern counterparts weigh about the same; but I have retired the axe for a much lighter BD model.   Otherwise I don't keep old climbing gear, as it is beyond its recommended, usable life.

Here's the one aluminum pot that I have left from my original Sigg Tourist cook kit, vintage 1970, the one that came with a double decker windscreen for a Svea 123. 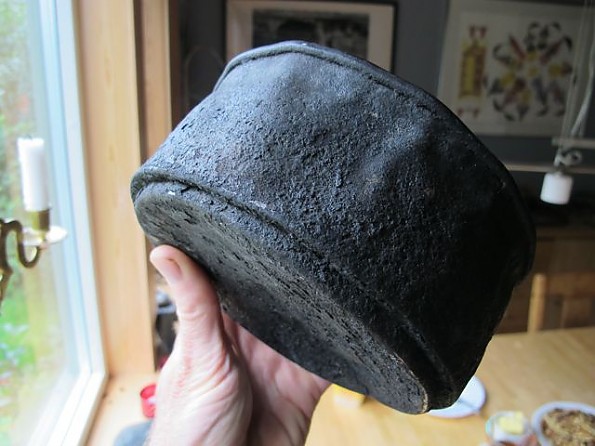 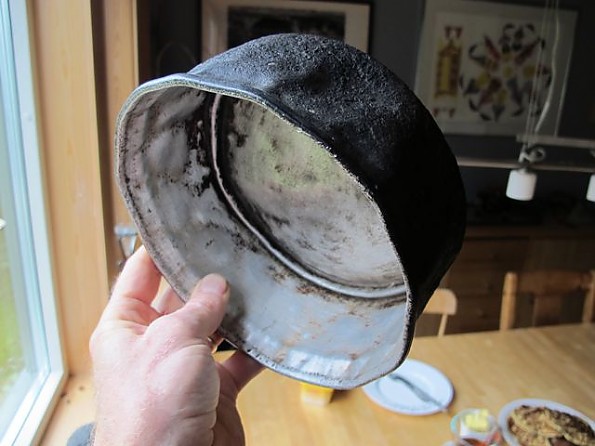 It's the smaller of the two pots -- the bigger one actually developed a pinhole leak along the bottom edge from some combination of being banged around and repeated scrubbing. I don't know what happened to the wind screen.

This one (and I think its bigger partner) went around the world with me on my two-year + "big adventure" in NZ, Oz, Malaysia, and Nepal (1978-81), and of course on all my early backpacking trips in NH through the 70s. There was also the Alaska highway and some hiking in Alaska in 1974, the Grand Canyon in 71, other canyon trips in AZ in 73-74, JMT 81... For a lot of the later trips I favored small fires over a stove, so the pot is hopelessly encrusted with fire black that can be traced to many of these places -- I subscribed to the notion that black pots actually heat up faster. My wife thinks it's disgusting and wants to throw it out. I would like to frame it and hang it on the wall.

Whatever you do, hang on to that pot.  I think it is beautiful.  I still have my original Boy Scout mess kit from 1960 and would never part with it because of the memories.  Stuff like that are old friends.

Wow Red.  If you cleaned the carbon of that pot you'd probably have nothing left.

Clean the carbon off the pot I could probably use it as fuel and boil up some water over it...

I love that pot

My oldest piece of gear is my Boy Scout Brunton compass. I got it in 1968 at a Scout Camp Jamboree in the Sierra Nevada. I still carry it tho I rarely use it. Its the flat 2 x 4 inch with the turning compass dial. I learned my first Map and Compass techniques on it.

My second oldest thing is my Ensolite pad I bought in 1977 in Gary Kings  Sporting Goods in Anchorage AK. I have had a Therm-o-Rest but it was always getting punctured, I gave it away and got my old Ensolite pad out of my sisters attic and am back to using it.

Several items. McKinley bags from REI bought in 1963. Also a couple of Kelty B4s same vintage. Salathe or Chouinard? piton hammer. I've had these and a few other older items since new. The hammer hasn't been used in decades, the bags get used every winter, the Keltys only occasionally.

Oldest piece of gear is ME! Oh, wait! I think you meant hardware and such.

Well, there is the Kelty Backpacker (1960, bought from Dick Kelty from his garage, when he was still doing a lot of business from his house in Glendale), Bauer Karakoram sleeping bag (also 1960, but mostly just stays in the gear closet, mail-ordered from Bauer), Aschenbrenner ice ax (bought at Bradley's, a long-closed climbing gear store in Pasadena, in 1959, hung decoratively over the fireplace these days), Terray duvet (down parka, bought from Snell's in Chamonix in 1964, still wear it occasionally), a collection of soft-iron pitons from the late 1950s and chromolly pins (including angles up to bongbongs, Lost Arrows, Leeper Zs), carabiners (including a number of the Alcoa Chouinards). From the early 1960s, a full set of Clog chocks (some of us were using them here at Tahquitz and Yosemite in 1963-64, contrary to some of the climbing history books saying chocks weren't used in the US until the 1970s).

I still use my old army surplus bearpaw snowshoes (bought at Bradley's in 1959) from time to time - I prefer my 1990's Atlas, though (Perry, the founder of Atlas, created them while a grad student at Stanford as one of his grad student projects in my next-door neighbor's engineering design course).

Except for the snowshoes, I bought all of this stuff new and used it (in some cases, still use it occasionally). I'm not a collector, just someone who rarely throws things out, though I have occasionally sold some items - like the first climbing rope I had. 120 foot Plymouth nylon, bought from the Dolt (Bill Feuer, from the trunk of his car), later traded to Marty Karabin, a super-collector, for a new 60 m Dominator rope from Bluewater.

You have lived in the Mecca of outdoor equipment purveyors.  I love to hear about people buying stuff from the original designers of equipment, "out of the trunk of his car."

I had some similar experiences in Seattle in the 1970s with people like Jim Whitaker.  In our lifetimes, we have seen backcountry equipment evolve from primitive (like the Old Trapper Nelsons), and military surplus, to sophisticated equipment.

We have an old aluminum cookpot from the 1970's as well...but it is clean!  Since we stopped cooking over a fire in the 1990s, I cleaned it once...and now it is more or less shiny.  Still works.  What's not to like?

I saw a Trapper Nelson in an antique store recently and they wanted $100 for it. My most used old gear are some plastic cups from the early sixties. I don't know the brand, but they are dark green, although I have a red one I bought used some years ago. They are on every trip. Nice shape, lightweight and they double as measuring cups.

So much of the above gear qualifies as heirloom, it seems to me. I would imagine there are collectors? Do people ever insure it? or put it in a will? Because nevermind the 'market value', there's the sentimental and symbolic. As you all know, obviously, there can be a lot of personal and/or family history in a particular piece of gear, even the most basic.

My father went camping and hunting with a 3/4" thick blue closed-cell foam pad for over twenty years. He then gave it to me, and that was twenty-some years ago. Last year I finally quit waiting for it to wear out, declared it indestructible and bought a new pad anyway. But the blue foam is still in use, and even if wasn't, it would still be among my gear.

So much of the above gear qualifies as heirloom, it seems to me. I would imagine there are collectors? Do people ever insure it? or put it in a will? ...

answers to your questions:

1. Yes (Brian in SLC, who used to post on Trailspace a fair amount; Marty Karabin, who I mentioned in my post; and dozens of others who hang around eBay, SuperTopo, and other climbing sites, plus a couple of museums, like the Yosemite Climbing Museum, run by Ken Yager). Gary Neptune's shop in Boulder, CO, is famous for the walls being hung with historically important gear, much of it having been used in notable first ascents. Some of the collectors are a fanatical bunch, paying very high prices (as with all kinds of collectibles, including stuff most of us would consider as junk)

2. Yes (but basically only the climbers museums)

3. Yes (Marty has been trying to convince me to put certain items I have to specifically go to him - mostly Dolt gear). Most of the time, though, people just give the gear to specific museums or ask their families to give it for them.

I've got a Lost Arrow (now Black Diamond) piton. Will try to find and post a photo.