This is a link to another website of a very large rockfall caught on camera. It is quite impressive to say the least.

Yow!  Makes you want to run right up there and see what the heck is going on....NOT!

Great. Thanks. As if this isn't always on my mind every time I go into this place already. 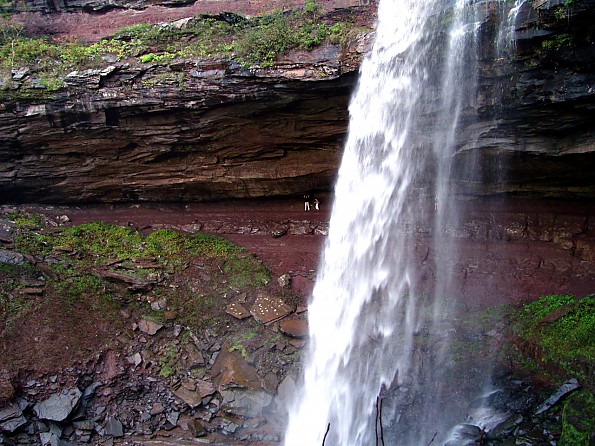 I can only imagine being on a trail under that when it started moving. Hope no one was hurt. Bet those people that took the video were a little freaked out on the way down.

Would have been a bad day for climbing on the wall where it happened! WOW!

I would imagine the sound it made was incredible and vibrations in the ground could be felt. Hopefully no one was coming up when that sheared off.

Holy cow! I just noticed those people under the falls. Crazy.

Holy cow! I just noticed those people under the falls. Crazy.

LOL, That's me & my son. My wife is always too chicken to go in there. Maybe I'll be too from now on after seeing that video.

Nature- its not what you think.

I was on  horse pack trip once in Wyo and we were about 35 miles in from the traihead on the Buffalo Plateau.  A 400 yard section of the trail across a scree field had collapsed.  We had to lead each saddle and pack horse on foot.  It took 3 hours and 2 of the horses went down.  No serious injuries, but a lot of work and very tense.  We learned later there had been an earthquake the year before.

Rockfall is common in the mountains. I have seen it in many of the areas I have climbed in. The idea is to pay attention to where you are going and often the time of day. This image is from a climb of Mt Hood (Oregon) I did in August: 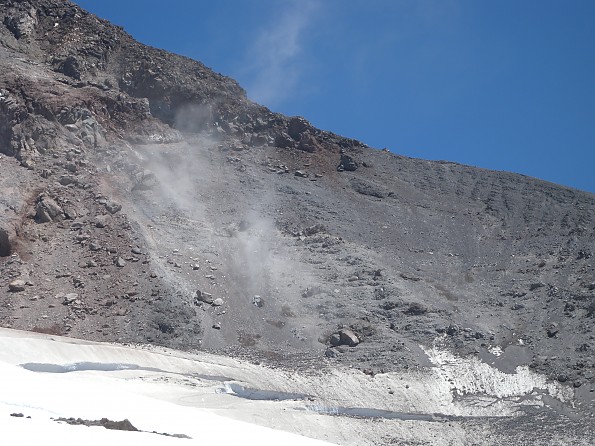 I was about halfway between the top of the ski area and the Hogback. It was well off to the side. That's dust from the rocks falling. A couple of the large rocks you see were rolling down the slope at the time of the photo.

I have seen the same type of thing in Yosemite Valley (wasn't there during the big slide that dropped a huge amount of rock from Glacier Point into Happy Isles or the one last summer that dumped rocks into part of Camp Curry, though). On Denali, all along the West Buttress route, we saw multiple slides every day.

You just have to keep The Big Eye open, pay attention to conditions, and basically learn what conditions lead to rock fall and avalanches and what part of the hills are likely to slide. That's something you can't learn from a book - only experience and guidance from an experienced mentor.

More Topics
This forum: Older: Talkeetna flooded Newer: A glimpse of what it's like to climb Mt. Huashan in China
All forums: Older: A neat little camp stove. Newer: Tent for overnight hike