Last night, Barbara and I had dinner with a few friends (about 700 of us) to celebrate the 50th Anniversary of the American Mount Everest Expedition in 1963. This photo shows Barb and me with four of the expedition participants: 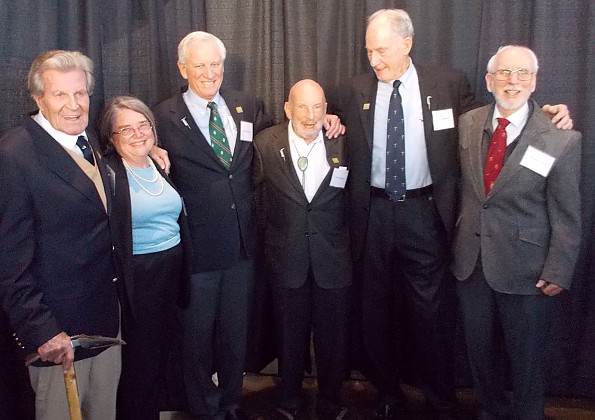 From L to R, Norm Dhyrenfurth (expedition leader), Barb, Dave Dingman (one of the MDs on the expedition), Tom Hornbein (did the first ascent of the West Ridge with Willie Unsoeld), Jim Whittaker (first American to summit Everest), and me.

The AAC Annual Meeting filled the weekend, with a number of presentations focused Everest and the American expedition in particular. We got to meet with a lot of old friends and visit with them (including two of the party in the photo).

One piece of business was discussions of this coming summer's Climber Science Program. I will be heading back to Peru again with the program, where we will be doing environmental studies of the Cordillera Blanca section of the Andes, in Huascaran National Park, from the valley floors to the summits (some over 20,000 ft). My first trip down there for the program was in 2011. You can learn more about the program on the American Alpine Club's website. You can help support the science being done with a donation. All participants (the climber-scientists) pay our own way, so donations go directly to the science.

So, do you think Mallory made it to the top?

Looks like an interesting group you met with there!

We had two sessions on Mallory - the basic evidence is that no, he and Irvine did not summit.

A good read about Mallory and others is, "Into the Silence" written by my friend Wade Davis. Jim W. fitted me with my first(maybe second) pair of boots, a few months off of Everest. Nice to see these guys are still around. So many others are gone, some tragically like Willi.

A good read about Mallory and others is, "Into the Silence" written by my friend Wade Davis. Jim W. fitted me with my first(maybe second) pair of boots, a few months off of Everest. Nice to see these guys are still around. So many others are gone, some tragically like Willi.

Indeed it is.  You keep some fine company, Erich!  I crossed paths briefly with Wade in Peru, many years ago.  Did not know at the time who he was; otherwise I would have tried to get his number.  I recall he was smart as the Dickens; and had a good camera eye.  I think he was doing a botanical project at the time.

Are you sure it was Unsoeld that sold you your boots?  I don’t recall he worked in the equipment business.  Perhap you meant Whittaker – I got an axe and some ropes from him back in the 60s from an REI.

Jim W. fitted me with my first(maybe second) pair of boots, a few months off of Everest.

Erich, Wade was there and gave a great talk from his book. He was nice enough to give me a copy with a personal note. I hadn't realized that WWI figured so strongly in the British expeditions to Everest, nor that the geography of the Great War was so small, yet so brutal. The fact that such a large fraction of British men died in that conflict is mind-boggling. The psychological effect on their attitude abut risk in climbing was profound - makes us modern climbers seem like wusses. Their casualty rates per day were greater than the modern conficts per year rates. My father was in the US Navy in WWI, and his ship sunk. He never talked about it much, though I have his diaries. I am working my way through Wade's book. The great maps and photos, along with all the detail he researched and includes makes it all real.

I first met Wade when I was working on an article about threats to the Sacred Headwaters. Shell Oil had proposed putting as many as 10,000 coal bed methane wells  near the headwaters of the Skeena, Nass and Stikine Rivers. I got word in December, after years of work by Wade and the Skeena Watershed Conservation Coalition, that Shell decided to back out.

On the heels of that, the Yukon Government has thrown out the recommendations of a bilateral commission who worked for years on a plan to protect the Yukon's Peel Watershed. Now, it appears, the government is making very pro resource decisions, including roads, mines and wells, in a a very fragile area.

Our casualties today, in the Middle East, both psychological and physical, not withstanding, it is hard to imagine the carnage of WW1. For ten months, French and German losses at Verdun totaled a quarter of a million dead and more than one million wounded. Even those who survived that war with no physical defects, came out profoundly changed psychologically.

..I hadn't realized that WWI figured so strongly in the British expeditions to Everest, nor that the geography of the Great War was so small, yet so brutal. The fact that such a large fraction of British men died in that conflict is mind-boggling.

And to think the great flu epidemic of 1918 actually took more military casualties than the fighting itself.  Times have changed.  Our shrinking world would not tolerate such carnage nowadays.  At least not when an alpha nation is the victor.  The big controversy today is drone strikes that cause relatively few casualties, their effectiveness and impact on our security and diplomatic objectives.  Seemingly the scales of these events don’t equate, at least not from a human suffering stand point, but only the living – and those out of harms way at that – can afford such musings.  What has remained constant over the decades is the alpha nations still act with impunity, and often these acts are seen through the eyes of the infiltrated nations as acts of imperialism.  The world could really use a League of Nations…

Ed, well said.. That sort of wholesale carnage might not be tolerated today, but what will the world citizens of the future say about what we do today? There was much that came out of WW1 that shaped our lives today. One was the random chopping up of the Middle East which led to so many of the problems we have today. My father, with the USAAF, flew supplies to Iraq in support of British troops there, after the Hashemite regime they established, sided with the Axis in WW2. Although both Gertrude Bell and TE Lawrence were not always right in their goals, they understood the ethnic and tribal alliances in the Middle East far better then the leaders in France and England. And the war reparations made against Germany and the newly formed Weimar Republic, allowed a little Austrian guy to usurp power there. Another interesting side bar of the 1920's and the League of Nations,(though not directly connected with the latter), was the US Congress' refusal to hear the pleas of a young Vietnamese who wanted the land of Lincoln to help him kick his colonial rulers out of his homeland. Hindsight is always 20-20.