Can anyone identify this ATC?

I was reading "Rock Climbing: Mastering Basic Skills" and came across a photo of an ATC that I've never seen before. Can anyone identify the brand and name of this ATC? Thanks!

Can't really see it too well, and way to little detail to name a brand, but the design just looks like an early version of the original Black Diamond ATC that's turned into the ones we use now. Post 'Figure 8' but not too far off, but that's just a guess.

Pics too small for me to see details.

What year was the book published? You could at least eliminate some companies based on their start up year. 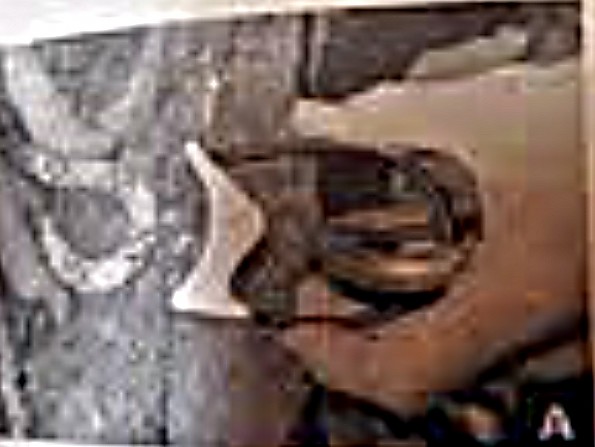 I copied the image to my photo editor app and enlarged it, I am not a climber but thought the enlargement may help someone identify it? I also rotated the image the way it was pictured in the book.

At first, it sort of looked like an ATC XP, but I'm not sure it is BD.

It is not BD. It looks closer to one of the Petzl Reverso family, but I think it another brand, though I can't remember which one it is right now.

The way the user is holding the rope on the device is a sure way to lose a finger, though it is related to a slightly different technique that actually works well for lowering someone

It is not BD. It looks closer to one of the Petzl Reverso family, but I think it another brand, though I can't remember which one it is right now.

The way the user is holding the rope on the device is a sure way to lose a finger, though it is related to a slightly different technique that actually works well for lowering someone

Trango B52, got it. The ATC looks sweet, it's very sleek and I like the more pronounced edges. Do you think they still make this model?

Trango makes something called "Jaws" which is similar. I don't think they still make the B52. BTW ATC or Air Traffic Controller is BD's name for their product line of "belay devices".

ATC is, I believe, actually a registered trademark of BD, although it seems to be getting used increasingly as a generic term, like "Kleenex" and other trademarked and copyrighted names. So it really should not be used to refer generally to belay and rappel devices. A couple of generic terms that are descriptive are "belay device" and "tube-type belay device", the latter covering everything from the Sticht plate, the "Tuber", and devices like the BD ATC, Reverso series, Jaws, and a lot of others.

Over the years, I have acquired about a dozen belay and rappel devices, including the "automatic" ones (which are definitely NOT automatic, as the manufacturers will be quick to tell you), such as the Petzl Grigri, Trango Cinch, and various "autoblock" devices like the Petzl Reverso, Reversino, Reverso 2, Reverso 3, and Reverso 4, plus the Black Diamond ATC Guide (2 versions so far).

They all require proper training and constant attention to correct usage. I have seen a number of "floor drops" in gyms and on rock from inattention or misuse, especially of the "automatic" devices.

Good point about automatic devices, Bill. In a climbing gym when my son was small, I watched two belayers having a conversation while their partners were climbing. Perhaps in the gyms this is considered ok, but I want my second to be paying attention.

I had a Sticht plate but didn't like it much and never really liked the early autos, preferring a figure 8. Out of curiosity, I wondered what I still had left and just looked through my old hardware bag. Some runners, etrier, a chouinard rock hammer, and salewa hammer with a small ice pick, a few 'biners, a Troll Whillans harness, a chouinard nut pick and some nails. The latter some CAMP, a couple of malleable iron ones and some marked with a C inside a diamond, and a nut pick I ground from a metal shelf support.And lest anyone make a derisive comment about Whillans harnesses, they, as well as belay devices, required attention in how the rope was run.

Hmmmmm.... how much do you want for the Coonyard hammer?

Thr pins with the "diamond C" probably are from Great Pacific Iron Works in Ventura, based on when it sounds like you got them.

Bill, I'll have to think about the hammer. It seems that some of thos old things are worth their weight in Kendall Mint Cakes. I'm not sure when I got the bongs and angles, maybe about 1980. The nut pick is marked "Chouinard", so I had thought that he had dropped the GPI name by then.

Now Trango has produced the B-52!  It is much lighter (60g)
and more simple than the Reverso.  It weighs 60gm and the Reverso weighs 81gm.  It looks more like the ATC or Trango Pyramid, but the advanced design makes it easier to load the rope through long slots and easier to feed rope to the leader.  It is a very smooth rappel device for ropes from 8 to 11mm.  The B52 will also function as an autoblock with a locking carabiner from your SARENE anchor clipped through the long slot that takes the upper belay rope.

(The alloy body of the B52 reportedly tested very strong in this configuration.
It was tested on an Enstron dynamometer and reportedly the carabiner broke before the B52.)  The Trango test showed the B52 required 19.2 pounds of force for a 10.7mm rope and only 23.2 for an 8.4mm rope, very important for the traditional mountaineer.

Here is the B-52 in use in a class in Bend Oregon. It is used by the rappellers:

..Thr pins with the "diamond C" probably are from Great Pacific Iron Works in Ventura, based on when it sounds like you got them.

Correct.  I used to have these and other Chouinard gear from that era.  I used to remember the story behind how he came about choosing the diamond for his company’s logo; strange I still remember the recipe for making dirt…

The good ol’e days were fun, but I don't miss being yanked to a halt by my swami belt, or trying to down a pilot biscuit topped with zippy cheese spread, not to mention mint cake

Ed, I only used a swami belt for a bit, and nothing commercial, just runner. As soon as I saw the Whillans Harness I bought one and never looked back. zippy cheese spread...yuck. I preferred prosciutto and brie on my pilot bread, and still sometimes partake of that combination.

Topic: Can anyone identify this ATC?