Had a chance to check out Reel Rock 8 last night at a nearby climbing gym (I know, I know, keep in mind in Canada we get everything 3 months late!). Some reel, pun intended, cool films this year, I highly recommend checking it out.

Climbing legend Hazel Findlay was there and gave a little presentation and intro to her film "Spice Girl". One bad to the bone, to be family friendly in my wording, chick! 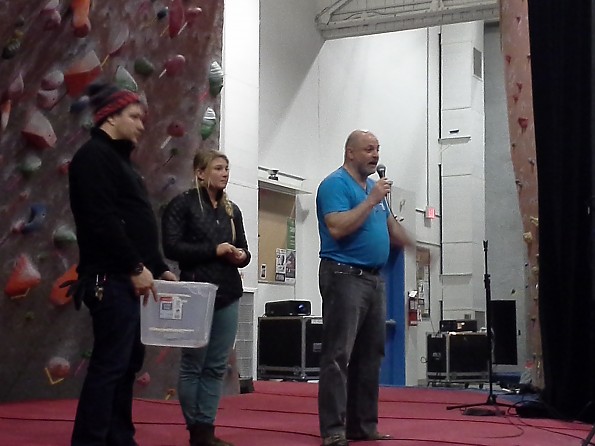 The Sensei was probably my favourite, and not to re-hash the whole thing again but getting a little insight into the whole Everest fiasco was interesting.

Some free giveaways sponsored by North Face, got a great seat on top of the bouldering wall, overall great night!

Anyone else had the chance to check it out?

No one? nobody has seen these awesome films?

I wish I had.  Did you find out the scoop on Steck and the Sharpas?

over the years, here in knoxville, they have had the reel rocks tour come through....

this year, they had the "faux reel rocks" as i think some other organization other then the univerisity had the "real" one...

anyways----not all showings have the same films in them......they tend to sway the films to whatever city/organization that they play for.....

but, i tend to go to these things (mountainfilms and banff as well) as thats typically the only outlet for films such as these in town....

they did play the everest brawl film here in town and it still sounds like a pissing match between everyone involved...

however, what i did learn from that film---is that everest is way, way too crowded.....which leads to events that happened up there........