How can I help a scared climber?

I took my GF climbing for the first time last weekend.  Like a lot of people she got about ten feet off the deck on a 5.2 route on toprope and was done, refusing to continue.  She is REALLY scared by exposure.  I wasn't the pushy BF and let her down and didn't berate her or anything of course.  We ended up having a nice hike with a picnic so the day was an overall win.  She says she really wants to climb but gets fearful whenever there is any exposure.

Question: How do you inoculate someone to exposure (heights) so they can at least function? 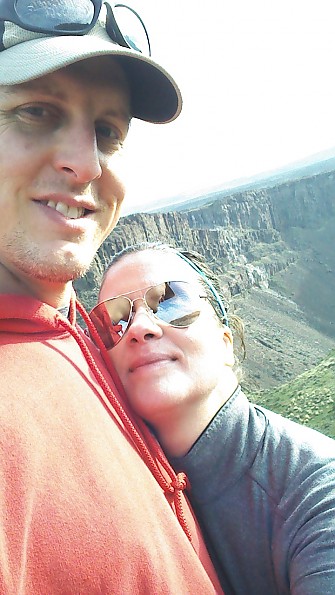 It was still a fun day 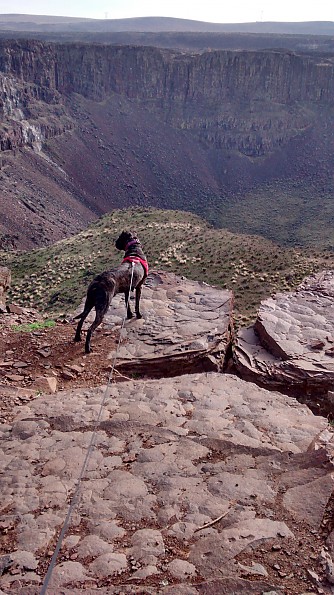 The dog had fun too

Maybe start out by going to an indoor climbing gym. This might help to build confidence and trust in the equipment and in you as a belayer, as well as getting exposure to heights in a controlled environment.

You have any access to low grade class 3 terrain that can be done unroped?

You could use the approach we use in instructing Boy Scouts. Inevitably, when you take a troop out, there are a couple of the boys (usually the 10-11yo, but sometimes 16-17yo) who start off not wanting to even try it (until they see their buddies having fun). With a group of kids, DO NOT allow peer pressure to get a kid on the rock (same thing in a climbing gym - it doesn't matter whether it is real rock or plastic, it's the height that scares them, even 2-3 ft off the ground). Also, make it clear that everyone else is to be quiet - no kibitzing, no peer pressure ("come on wussie Johnny, everybody else can do it, you're a chicken"). With kids, make sure their parents (especially macho fathers and terrified mamas) keep their mouths shut, maybe even sending the parents off out of earshot.

Comparison to others is strongly forbidden - no "Charlie did it, so you can do it, too".

Number 1 rule is something we call "Challenge by Choice". There are 3 levels of challenge:

A. Easy for me today

B. A challenge for me today, But I will give it a try (provide gentle encouragement, no verbal pushing/harassment)

1. Teach the person how to tie into the harness themselves, and how to check that the knot is properly tied.

3. While on the ground, pull the belay rope tight, and have them sit down with their full weight on the rope.

4. Have the newby climb up 1 or 2 holds, then again put their full weight on the rope, then climb back to the ground. Explain how they should lean back onto the rope and "walk" down the rock as you lower them on belay, as well as downclimbing.

5. Have them climb a bit farther, to the point where they are feet off the ground and hanging, so they see that the rope will indeed hold them. After they can get up 4 or 5 feet confidently (climb up and climb down several times), and are used to seeing that the rope will stretch, but it holds them, you can demonstrate and explain that the elasticity in the rope cushions the climber if s/he comes off. You should also demonstrate how they can be lowered gradually and safely. Avoid rapid lowering, though also not too slowly.

When teaching very young kids, I have seen a kid who was too terrified at first to go more than 6 inches off the ground, come back to try again and get up 3 or 4 feet, then repeat several more times, eventually getting to the point they are scampering up the rock, hogging the route, until you almost have to peel them off the rock.

Adults are a bit harder to deal with when overcoming the fear. But the idea of going step at a time and building self-confidence gradually has worked for my instruction of adults and kids 90% of the time. Another thing that helps with adults is teaching them how to properly belay. When they have lowered someone on a toprope a few times, the dawn breaks and they get the idea that "Hey! This really works!"

In something like 50 years of teaching people to climb, this approach has been extremely successful. There have been a few people who just didn't get it on the skill side. But as I said, on the confidence side, 90% success. My biggest failure was working with a group of adult Scout leaders who were planning to take their Scouts climbing. All of the adults were Chinese (recent immigrants), and their Scouts were also Chinese. I do not speak Chinese, so was working through an interpreter who was an inexperienced climber himself. Demonstrations worked ok. But the verbal part did not get across very well. Ultimately, I found an experienced climber who was born in China, but immigrated as a young boy. His Chinese was a bit rusty, but adequate (I think there was also a problem of the one side were Mandarin speakers, the other Cantonese - same writing, different verbally)

BUT .... a major caveat. It is often true that one should not try to teach a spouse or significant other (goes both ways in my observations) how to do most things. Have someone experienced in teaching the activity who is not related deal with it. There is too much emotional baggage involved between spouses, including expectations and stirring up of other conflicts.

Been there, done that, witnessed that with kids, adults, spouse (both directions - she is an excellent "belay slave").

I second Bill's major caveat. There is too much baggage/other issues, especially connected with potentially dangerous outdoor pursuits. I did teach my spouse and did teach my son the very basics of ww canoeing, but it is much better if they learn from someone else. Better to have your GF take a course from an organization. That way, she may end up teaching you a few things. :-)

The only way to add to Bill's excellent advice is to share my perspective as someone who is pretty creeped out my exposure. I focus deliberately on my breathing, which helps enormously. I also find the experiences of rappelling enormously reassuring. It provides a lot of confidence in the practice of belaying and the next route is always calmer after a brief rap.

Took a real fall at the gym Tuesday.  One second I was reaching for a hold the next I was hanging off the rope.  On Friday when I went back for the knot class I found myself reaching more and more confident on small toe holds.  The fall gave me faith in the rope and my belayer.  As other have said above baby steps in a gym where you learn to trust the set up.

It is fun to have fun but you have to know how!

Topic: How can I help a scared climber?