One could learn a lot from reading the analysis in these.  https://www.mountwashingtonavalanchecenter.org/incidents-accidents/

Important reading.  It is amazing how many people seem willing to head into the worst weather on the East Coast even in winter.

I think a lot of people just don’t realize HOW bad it can get and how quickly it can change. 3 summers ago a friend and I took the auto road to the summit, it was a nice sunny August day with temps around 80F at the base and 60F at the summit. Soon after we got up there we were in a storm cloud, it went from sunny & 60F to windy, pouring rain, and about 35F air temp. With the top off my Jeep we had to wait out the storm, which took over an hour. It was cold! I had a rain jacket with me (always in the Jeep when I’m topless & odorless), my friend was in shorts & a tank top and brought a sweatshirt. She ended up buying a pair of sweatpants in the gift shop.

The worst part was that due to the storm they’d closed the auto road to ascending traffic for the day, and a couple we were talking with was stranded after hiking up - a friend was supposed to come get them. The Cog Railway was still running but that’s expensive. They and their dog were looking at either spending the night in the tunnel between the weather station and gift shop or an 8 mile hike to the highway. We said we’d give them a ride to the Pinkham Notch visitor center where their ride was waiting once the rain tapered off.

We all loaded up (4 people and 2 dogs) and headed down, we’d gotten maybe 1/4 mile when we came to 2 women walking so we told them to hop in and continued on our way. The latest 2 were sitting on the spare tire, all we needed was chickens and goats and we’d have looked like an African bus LOL 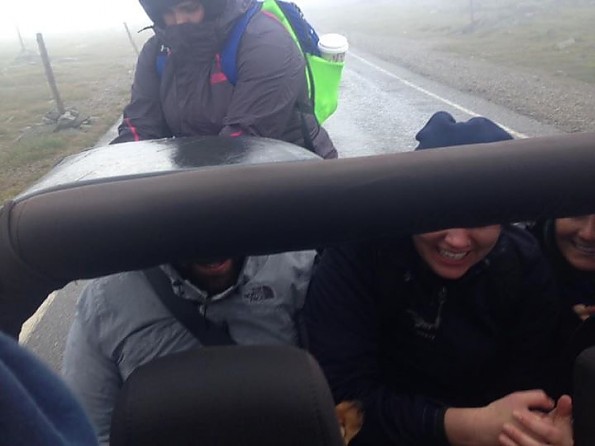 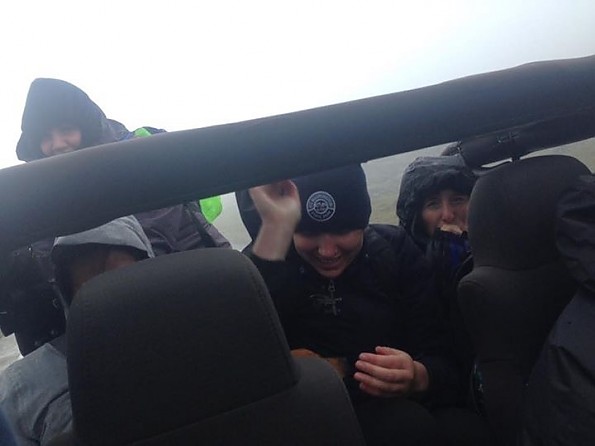 A little chilly, but it beats walking! The chill is obvious.

Now imagine it’s winter, a nice day with temps in the teens and very little wind (20-30mph is “very little” in winter), and all of a sudden the temps drop 30 degrees and the wind is hitting 80mph. And it’s not just on Mt Washington, it may be the worst but the weather in the Whites and the taller mountains of western Maine can be deadly any day of the year. From September to May you’d better have your S together because you could find yourself forced to spend the night.

When assembling a team for Alaska and other difficult climbs, it is general knowledge you can have confidence in the climbers with winter experience in the Presidentials.  Some of the best American mountaineers cut their teeth in that range.  The mountains may seem small, compared with many ranges, but the weather is very big, indeed any time of the year.  Add in snow, ice and wind, and they become beastly as any of the fourteeners out west, or the high peaks of the north.

Recently we had a guy from Florida, Axthony? talk about his trip to CO to climb Mt Elbert a 14er.  These kind of stories make me shudder.  People just don't know what they are willfully walking into.

I think the number of deaths and mishaps in the smaller mountain ranges on the East Coast have a lot to do with access. It's very easy to drive in and very quickly get into trails and weather that are a lot more nasty than people anticipate if they aren't experienced.

I haven't driven up that auto road on Mount Washington since I was in grade school, but I have hiked up and around the northern Presidentials dozens of times, all seasons. Even in the middle of the summer, I plan for cold, high wind, and slick trails.  I bring microspikes....and have used them more than once due to summer sleet or snowfall.

I think the number of deaths and mishaps in the smaller mountain ranges on the East Coast have a lot to do with access.

There is a degree of validity to this opinion.  The San Gabriel and San Bernardino National Forests, but proximal to Los Angeles, have a lot of SAR activity, and some fatalities every year.  But do not discount the temperament of the Presidentials.  So Cal mountains can be brutal in winter, but rarely are that dangerous in the summer season (save for the flask floods), while Mt Washington and the likes can generate fierce, dangerous, micro climates the uninformed cannot fathom.

I think the number of deaths and mishaps in the smaller mountain ranges on the East Coast have a lot to do with access. It's very easy to drive in and very quickly get into trails and weather that are a lot more nasty than people anticipate if they aren't experienced.

I haven't driven up that auto road on Mount Washington since I was in grade school, but I have hiked up and around the northern Presidentials dozens of times, all seasons. Even in the middle of the summer, I plan for cold, high wind, and slick trails.  I bring microspikes....and have used them more than once due to summer sleet or snowfall.

When I first went above 4K feet it was Labor Day weekend 2017 and my plan was to summit Little Haystack via Falling Waters Trail and continue along Franconia Ridge to Mounts Lincoln & Lafayette, then take the Old Bridle path down. Wind chill along the Ridge was forecast to be in the mid 30s, I brought clothing that would let me survive a rainy night out - Merino baselayer, down sweater, rain jacket and pants, hat, and insulated gloves. I also had a stove and freeze-dried meal. (No spikes, though. Probably an oversight on my part.) I didn’t go any farther than Little Haystack due to time constraints, but the weight penalty for my piece of mind was minimal. I couldn’t believe how many people I saw with nothing but a water bottle, more than a few looked at my 36l pack like I was some kind of nut for needing something that big (I didn’t, it was just much more comfy than my 28l pack that had plenty of room.)

Phil you took and wore properly...or  tried, so few do...and many don't realize how nasty weather can be when they are stuck in it. Some over rate their selves and their clothes.

I did lots of SAR, professionally and as a volunteer, and seldom, if ever, searched or rescued someone/s properly prepared.

People also overlook the fact that everyone searching for them is at risk too, while carrying the hypothermic or dead out of the woods is no easy task.

And then in large group searches even some of the searchers, including many of the cops, are poorly clothed also.

I'm glad I no longer do SAR...though I would in the right place and situation.

for the presidentials, there is also the fallacy that nice weather at the base equals manageable once you start approaching the tree line. people who aren't familiar get surprised when the temperature drops and the wind starts blowing, and weather can change rapidly.

a while back, the Union Leader ran a story about a woman who took an October hike in 2010. she ended up rescuing someone who was totally out of his element (probably intentionally so, he had mental health challenges and had likely gone there to end his life). Weather on October 17 at Mt. Washington's observatory: highs in the 20s, winds 50 mph and rising, wind chills close to zero, plenty of snow on the ground.  The woman took selfies as she ascended that day - it's a great article for a number of reasons, but her photos illustrate as well as anything how the weather can change up there.