Which one do I pick?

Anyone have any experience with any of these?

I'm leaning toward the Spartan Sprint to start for its approachability but the Tough Mudder looks so much more fun.

The guys I work with want to do them all but I only have so many weekends to devote to races since I'd also NEED to hike/climb/hunt/fish/do other stuff.

If you had to pick one which would YOU pick?

Man! Did you do the quiz for the Tough Mudder? Pretty demanding.

I scored an 84. The questions were pretty subjective though.

I watched the tough mudder on mt snow VT. I think it is longer than the others, this course was about 14 miles with obstacles at the top and bottom of ski slopes requiring runners to go up and down about 6 or 7 times.  The half pipe had staked hay bails that you either had to zig zag around or jump over while run up hill all while a sadist with a 4 inch fire hose tried to knock you down.

There is no official time keeping  so really fit athletes do it in two hours while mortals take four to five.  Either way you need to be prepared.

I am doing the Vegas Mud Run in February!

Hmmm, We just signed up for the Spartan Sprint in May. Have about 2 months to train and going well so far. My understanding on these races is that the Spartan series and the Tough Mudders are the hardest ones right now. I did the Run For Your Lives race in December and it was fun, but overcrowded. All the info on the webz says that the Spartan Sprint is no joke. I'm kinda intimidated and that is why I'm getting serious about training for it. I did not train much for the zombie run and was fine. The Sprint is the shorter distance but requires a lot of endurance and strength. Good luck!

I just did a mini version for cancer surviving and research supporting women called The Dirty Girl Mud Run. Gives everyone a chance at the fun of teh obstical without the fitness demands of say a Tough Mudder. Only women can participate so it is a great way for "us" to do these without the intimidation factor. That is me ringing the cow bell at the top of the mesh ladder. 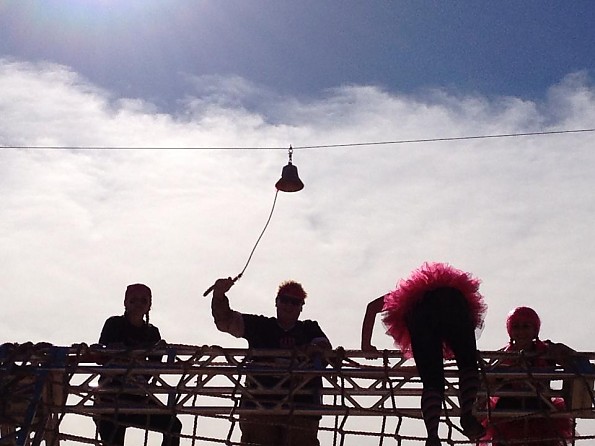 None of the above.